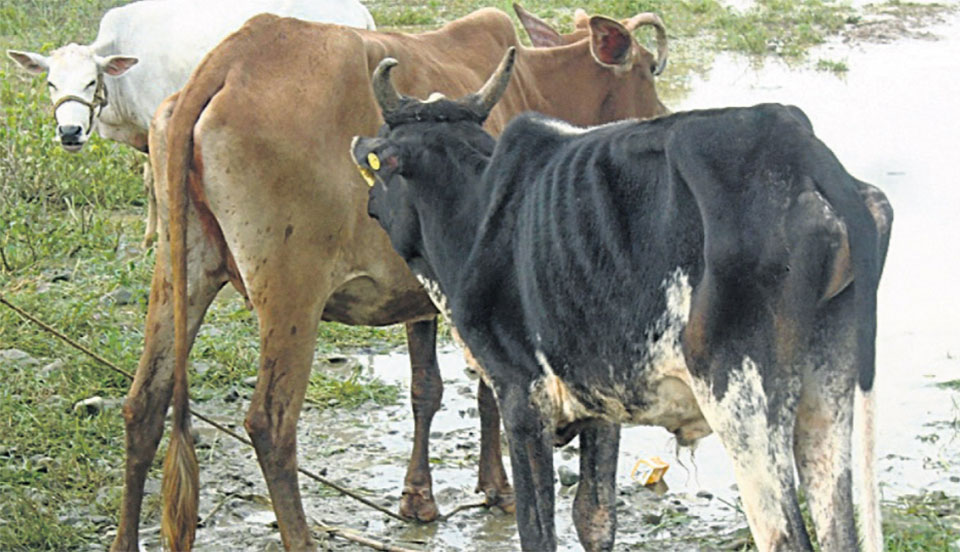 Stray cattle are seen on a Mahendranagar street in this recent picture. Photo: Rajendra Bhatta/Republica

MAHENDRANAGAR, Nov 11: In the course of his trek throughout the country, a spiritual guru Mohan Sharan Devacharya had landed in Kanchanpur one and a half year ago. He drew wide attention of people and local authorities when he talked about stray cattle, especially cows. "Cows left in the street are starving; many injured and have nowhere to go. This is a very pathetic situation," he said.

He urged everyone to do something about the problem. This worked. People started cooperating with the local bodies and cowsheds were built both at the public and private level. Some even came up with idea to send off the stray cattle to the mountainous zones so that they might have a better life.

A few months down the line, the problem only seems to get worse. Cows and bulls kept in sheds did not get any care. Reportedly, they starved there even more. Locals and authorities then realized that there is a need of a better strategy for managing stray cattle.

A few days back, guru Devacharya was again in Kanchanpur and visited some Gaushalas. He expressed sorry for the cattle. He again urged for improving the level of care provided to the cattle in the sheds. He held discussion several leaders and government officials as well in this regard. "Their condition is so pathetic, something must be done without delay," he stressed.

However, local representatives defended that they have been doing as much as they can and still they have failed to get things right. Over the time, the number of stray cattle seems to only grow. Abandoned cows and bulls are seen everywhere in markets, along the East-West Highway and all major junctions in the region.

The Indo-Nepal borderline looks even more chaotic. According to the traffic police, stray cattle have become the main cause of road accident these days. In the winter, many such cattle die due to cold.

Problems related to stray cattle persisted in the past. But it escalated with the rise of BJP in bordering states of India. Instead of killing cows, people in India started sending them across the border. Both 'Indian cattle' and locally abandoned cattle are now ubiquitous on the streets of Mahendranagar.

"We pasted stickers on those cattle and returned them to their respective owners. For cattle whose owners were not identified were sent to sheds operated by the municipality. Millions of rupees have been spent in these endeavors," said Pandey. "But their numbers have been increasingly steadily," he added.

Apart from opening new sheds and sending identified cattle to their respective owners, the municipality also warned of legal actions those found abandoning their cattle. But implementation of this rule has been lax and residents are yet comply with it. "Very few are sensitive towards cattle. This problem cannot be sorted out unless people realize how their behavior affects cattle and start cooperating," said Pandey.

According to Hari Singh Dhami, administrative officer at the municipality, 600 cows can be accommodated in the municipality's two sheds built at Baagfaat and Bramhadev. The municipality had built both sheds at the cost of Rs seven and half million. But there are hundreds of stray cattle on the streets.

"We sent 1000 cattle to Bajura by spending Rs 800,000," he said. The municipality had tried to send 500 cattle to Humla and Jumla. But this attempt failed after the person assigned with the task abandoned the cattle cargo midway. Many cattle died due to hunger and thirst.

According to information officer of the municipality Shankar Bhatta, finding an easy solution for the problem is very hard. "We have sent many cattle to various districts. But we know that this is not a permanent solution," he noted.

Management of stray cattle was an election agenda. Every political party had assured people of managing them. However, the promise remains undelivered. According to a local from Mahendranangar Madan Chand, the problem is so serious that local government alone cannot fix it. "It has to be addressed jointly by both the provincial and the federal government," he said.

KAWASOTI, August 27: Vehicular movement along the East-West Highway in Nawalparasi (East) has been completely disrupted as a diversion near... Read More...

KAWASOTI, Oct 6: Nine people were injured when a passenger bus they were travelling in met with an accident at... Read More...