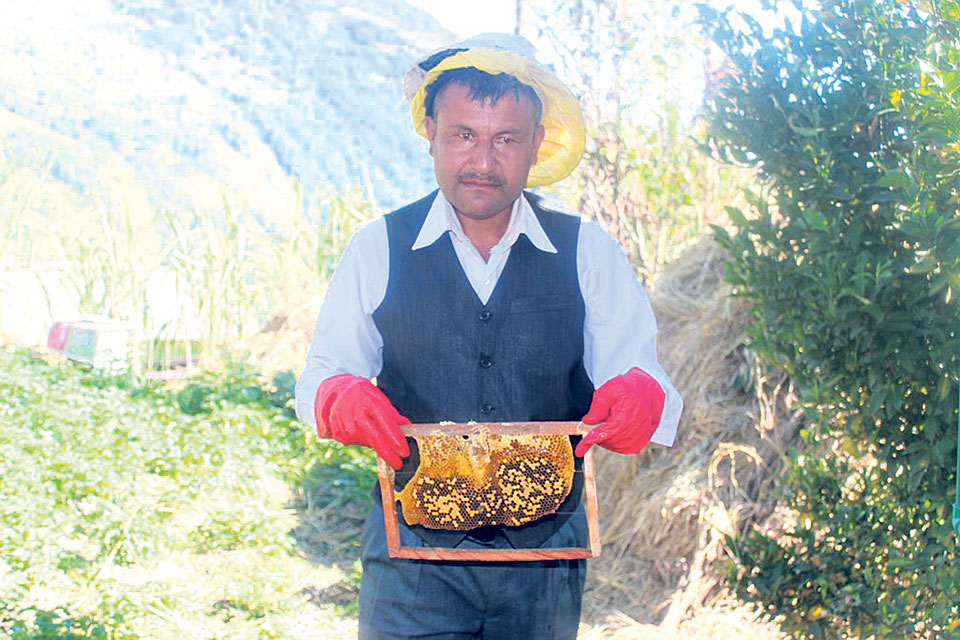 MYAGDI, Nov 20: Govinda Khatri of Mangala Rural Municipality-1 of Myagdi sold honey and beehives worth Rs 1.4 million last year. He had earned only Rs 10,000 in his first year as a professional beekeeper four years ago.

“Honey production increased after I started artificial insemination of queen bees,” he said, adding: “Last year I sold 180 kg of honey and 110 hives. This year I am targeting revenue of Rs 1.7 million and plan to sell 150 hives.”

The exemplary farmer says other farmers book his hives even before bees start producing honey.
In the initial years, locals of Myagdi bought his honey and sent it to their friends and families abroad. Now his honey has become so popular that he is facing difficulty in fulfilling order. “Two years ago, I faced difficulty to find market for my honey. Now, I find buyers at my doorsteps,” he added.

Khatri, who received advance payment for 80 beehives three months ago, is in a rush after he received fresh orders of 49 hives. He sells each hive at Rs 8,000.

Khatri sees immense prospects of bee farming in Myagdi. “We have big rhododendron forests and mustard farms which are perfect grazing areas for bees,” he added. He spends seven months tending bees. “I am busy in my farm from October to December and from mid-February to mid-May,” Khatri told Republica.

Like other youths in his village, Khatri also worked in foreign land for 15 years. “But I felt that we can earn more by modernizing our primitive farming techniques. It worked for me,” he said, adding: “Youths in foreign lands often contact me and seek my guidance. I advise them to return home saying that Nepal has endless possibilities.”

MYAGDI, Jan 4: Beekeeping has worked wonders for Govinda Khatri, a farmer from Moulathar in Kuhu-3 of Myagdi district. ... Read More...