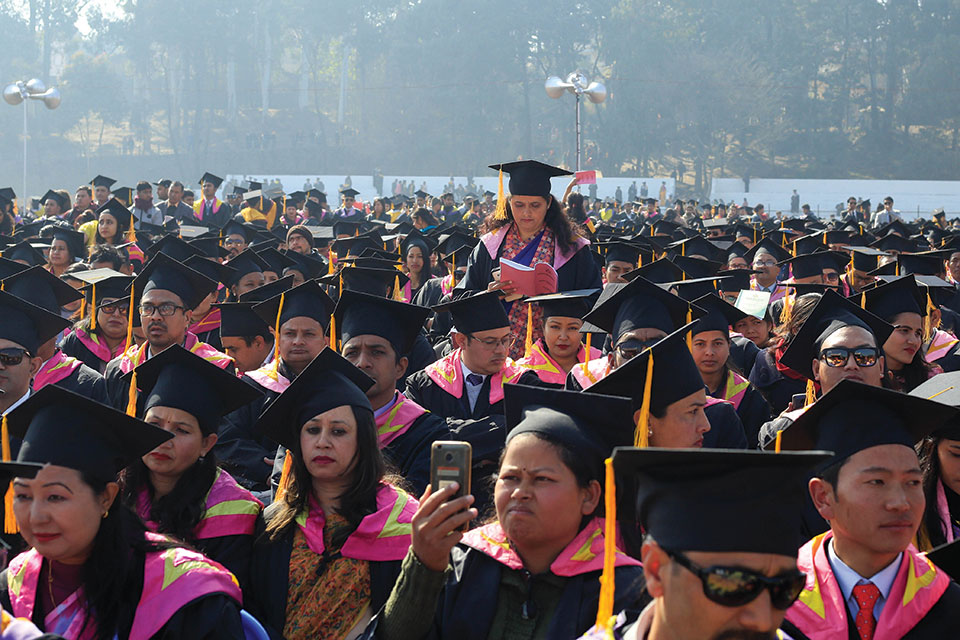 Awareness-raising and educating the people through mass media—by the government, its agents or by citizens—is one of the tools to lead the nation toward the progressive path. It is with this belief I bring up the anomalies in Tribhuvan University’s Master’s of Education program.

When the semester system was implemented in MED level, parents and students must have celebrated the move thinking that quality education was being guaranteed. Needless to say, the system has made students become more regular in the class and due to mandatory presentation session, they are forced to do their assignments too. But university teachers and professors are involved in such unjust and rampant malpractices (rarely reported in the media) that the whole system is suffering.

Despite that most students are not financially strong and struggle to pay their fees, some teachers and professors indirectly force students to buy certain books from the publishing companies they work for and which pay them commission money.   Instead of putting pressures on students to buy books why can’t they purchase them through university funding and allow poor students to borrow from the library? Shouldn’t teachers remain respected, as our culture demands?  With petty interests, why do they bring shame not only upon themselves but upon the whole teaching profession?

It’s a common practice for some teachers and professors to use students to achieve their tasks. A student of a university, who is a sociology teacher now, said that he wrote a book for his professor. In most cases, students are used as guinea pigs. Professors assign assignments to students not on the basis of what the students need but on the basis of what they require for their publication or research. On the other hand, on the pretext of encouraging or showing sympathy to female students, they touch them inappropriately.

Further, however well the students do their assignments, they always find faults and tell them the work is not good enough simply to demotivate and frustrate them. The tension and frustration of such injustice on the part of students is unimaginable. In the name of teacher’s autonomy and taking advantage of the liberty given by their university, they randomly and rampantly use and abuse students. In most cases, for fear of getting low grades, students tolerate. And sadly, students don’t know or see where to go to lodge their complaints and they doubt even if they did, if anyone in the university would speak on their behalf.

Almost all teachers and professors expect high level of respect from students at all times. They even expect to be praised and bootlicked by their students. But they don’t show respect to their students, among them the teachers teaching in various schools.

Some teachers and professors award grades to students haphazardly. Their interest tends to be providing grades of the same range to almost all the students. This is not fair. Students who are diligent, intelligent and who want to achieve more feel discouraged. This will ultimately frustrate them and demotivate them to work harder. If ultimately all students are allotted the same grades without consideration of any quality or intelligence, which fool would want to work hard anyway?

It seems that there is laidback attitude on the part of teachers and professors. It’s easy for them to give assignments but they don’t bother to go through them in time. Due to this, students either never get feedback or get it quite late. Further, they tend to favour those students who bring gifts to them, some would admire a bottle of quality liquor, or a birthday celebration with cake-cutting. In their happy mood, they don’t even bother to dismiss the class and it’s natural for students who organized such festivity to expect good grades. So in some cases, high marks and good grades may not be due to the well-written examination or well-presented papers but because of the ‘service’ bestowed upon them.

We have a long way to go. Let’s start raising voice against ill practices and begin eliminate them one by one.

KATHMANDU, March 12: PacProTec 2019, a premium show on packaging and food processing equipment, is being held from March 12... Read More...