A Review of Scholar's Perspective on Nepal's Foreign Policy 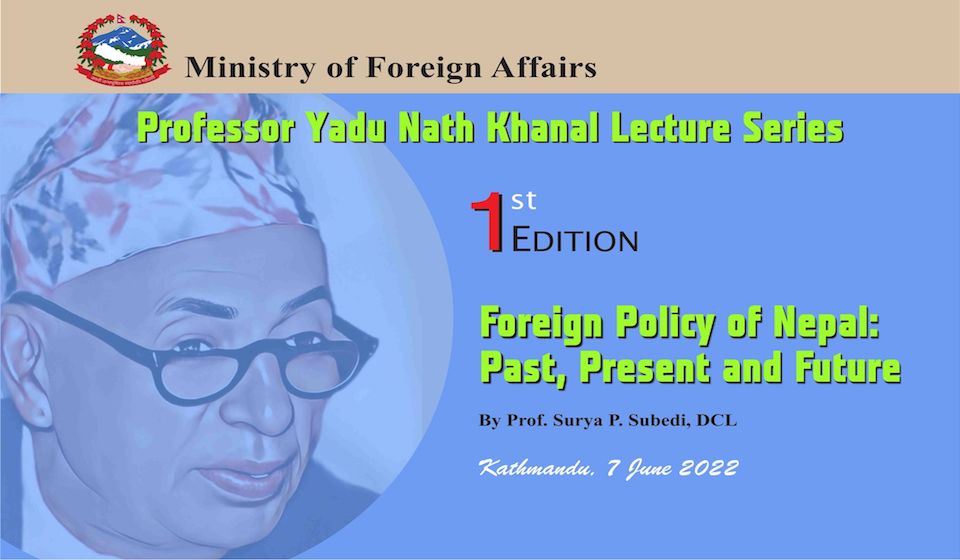 Bhattarai is a former foreign secretary. He also served as the foreign affairs advisor to President Bidya Devi Bhandari during her first stint.
news@myrepublica.com

In a country where the top guns in politics have frequently made fake promises of making Nepal another Switzerland or Singapore, Professor Surya Prasad Subedi's addition of Austria and the Netherlands as Nepal's likely transformation spots and even Kathmandu taking the place of London as the center of international arbitration and other legal counseling is quite optimistic and futuristic, if not utopia or one more fake dream to be sold.

The Ministry of Foreign Affairs deserves accolades for instituting Professor Yadu Nath Khanal Lecture Series to honor a distinguished scholar and doyen of Nepal's foreign policy on both theoretical and practical terms. A Nepali scholar specializing in international law and based in London for many years and connected with the universities of Leeds and Oxford, Professor Surya Prasad Subedi was invited to deliver the inaugural keynote lecture on the series on June 7, 2022, at Kathmandu's posh hotel in the presence of senior people who count in Nepal's over-all state of affairs. The topic of the lecture was all-encompassing, "Foreign Policy of Nepal: Past, Present and Future".

While people have different opinions on the very name of the series as some say it should have appropriately been named ‘Professor Yadu Nath Khanal Memorial Lecture Series’ as are the cases in many such examples in the region and elsewhere, the designation of Sardar that Professor Yadu Nath Khanal was given by King Birendra in 1977 in due recognition of his utmost services to the country was sorely missing.

Khanal was the second Foreign Secretary — the first being his teacher, Professor Narendra Mani Acharya Dixit — to get such distinction if we don't count the last Munshi as head of MunshiKhana, Nagendra Man Singh Pradhan was also given the designation of a Sardar and went to head the Public Service Commission as its first head. Incidentally, all three Sardars, Pradhan, Dixit and Khanal handled the Public Service Commission after their retirements.

In his presentation loaded with several quotations from our philosophy and beyond even to the extent of going far beyond the assigned topic, Subedi first presented the background of the subject with an elucidation of his contributions to Nepal, first as an officer of the government and later as an international lawyer, and emphasized on the supposed "similar background" that he shared with Prof Khanal in terms of birthplace. He credits some stalwarts like King Prithvi Narayan Shah the Great, Jang Bahadur Rana, Chandra Shumshere and King Mahendra for their great contributions to the country in respect of the foreign policy.

The scholar applauds the role of King Mahendra and Prime Minister BP Koirala in terms of strengthening Nepal's foreign relations in the region and outside. Calling King Birendra's Zone of Peace proposal innovative with stress on Nepal's desirable course for permanent neutrality, Subedi has possibly adopted a safer course by naming all the prime ministers appointed after the restoration of multiparty democracy in 1990 for their "wise decisions to safeguard Nepal's national interests on major foreign policy issues of the day." It is, however, a matter of speculation why he left out three prime ministers from the list, namely Manmohan Adhikary, Surya Bahadur Thapa and Lokendra Bahadur Chand.

Despite the topic being Nepal's foreign policy, past, present and future, the treatment in the text read out for an hour by the distinguished speaker, seem far from being uniform, if not wholly disproportionate. While the past aspect of the foreign policy covers almost three pages, the present and the most important area that one can speak with clarity — background and proven information — seems to be somewhat a passing reference reduced to six paragraphs within less than two pages.

In dealing with the past foreign policy, Subedi divides the period into what he calls six milestones. These include unification and territorial expansion — the Treaty of Sugauli of 1816, 1923 treaty, Nepal's diplomatic relations with the United States, the 1950 Treaty of Peace and Friendship, and Nepal's membership of the United Nations that spurred diplomatic relations with many countries.

The ambit of the future of Nepal's foreign policy is decidedly disproportional taking as much as 14 pages, more than half of the entire presentation. Calling for an enlightened vision and strategy, Subedi portrays a highly optimistic projection of the country in the near future. Listing some recommendations for focusing on areas of comparative advantage through constructive contributions to regional and global affairs and harnessing the "benefit of globalization", he calls for the establishment of some major institutes in Nepal like the Center for Himalayan Peace Studies and the Center for International Law to project a better image of the country and benefit it in various ways. He also laments Nepal's failure to get important positions in the UN including his abortive bid for an assignment.

In his concluding observations, Subedi exhorts Nepal to better shed its small nation syndrome and adopt his prescriptions to have a global outlook and go beyond preoccupations with the management of relations with its immediate neighbors to augment its "power and influence in regional politics and make inroads into global politics".

Besides being proportionally asymmetric, if not lopsided, emphasis on international law and its applications including the possible role of the country as a center of international arbitration, is not unexpected given the background of the speaker as an international lawyer with no practical experience in diplomacy. Even within such limitations, subjects taken up are in piecemeal and incomplete forms as illustrated by some examples and lacunae as one goes through the text.

In the context of Nepal-United Kingdom ties, at least two important things have been missed. They include the 1801 treaty that formally provided for stationing diplomatic representatives in each other's courts with the East India Company opening its diplomatic mission in Kathmandu in 1802 with a big representation. The mission was closed within the next two years.

Likewise, Juddha Shumshere deserves to be mentioned for his role in establishing Nepal's residential mission in London in 1934, a step in accordance with the provisions of the Sugauli Treaty despite having been reciprocated after almost one hundred and twenty years of continued British diplomatic presence in Nepal. Even in terms of popular but seemingly empty slogans so far — economic diplomacy and industrial development — Juddha Shumshere occupies a major place as he was the one to not only advocate a self-reliant economy with stress on the cottage and rural industries but also take concrete steps to establish some major industrial plants in Terai region. He also took initiatives to assert Nepal's transit rights, an issue first raised by Chandra Shumshere in the 1923 treaty through the construction of Simara airport when British India was amid agitation for independence.

Similarly, Padma Shumshere too made some serious overtures in terms of foreign policy that the speaker seems to have conveniently left out. These include his attempt to promote relations with India through his request for a constitutional advisory team, Nepal's first participation in any international conference through the despatch of an important delegation to the Asian Relations Conference in New Delhi and, last but not least, his decision to send a high-level delegation to China in 1947 to open our ties with Northern neighbors after a long gap since the decision of Chandra Shumshere to stop quinquennial delegations.

The other matter that was missing in the lecture was Prime Minister Mohan Shumshere's serious attempt to get Nepal admitted to the UN which was to blame for both the Russian veto and the serious lapse on the part of our politicians to engage in politics even to the extent contrary to the country's national interest.

In a country where top guns in politics have frequently made fake promises making Nepal another Switzerland or Singapore, Subedi's addition of Austria and the Netherlands as Nepal's likely transformation spots and even Kathmandu taking the place of London as the center of international arbitration and other legal counseling is quite optimistic and futuristic, if not utopia or one more fake dream to be sold.

As the scholar shares the distinction of getting DCL with Chandra Shumshere, Subedi could have given some references in his legal perspective on the abolition of slavery and discussions on possible membership in the League of Nations. He did not touch on Nepal-India ties, especially in the context of economic blockades that many take as harbingers of political changes in Nepal. While Subedi has spoken about what he calls his authoritative article on the 1950 treaty, he missed giving his authoritative statement on the EPG report that is gathering dust for the last four years. 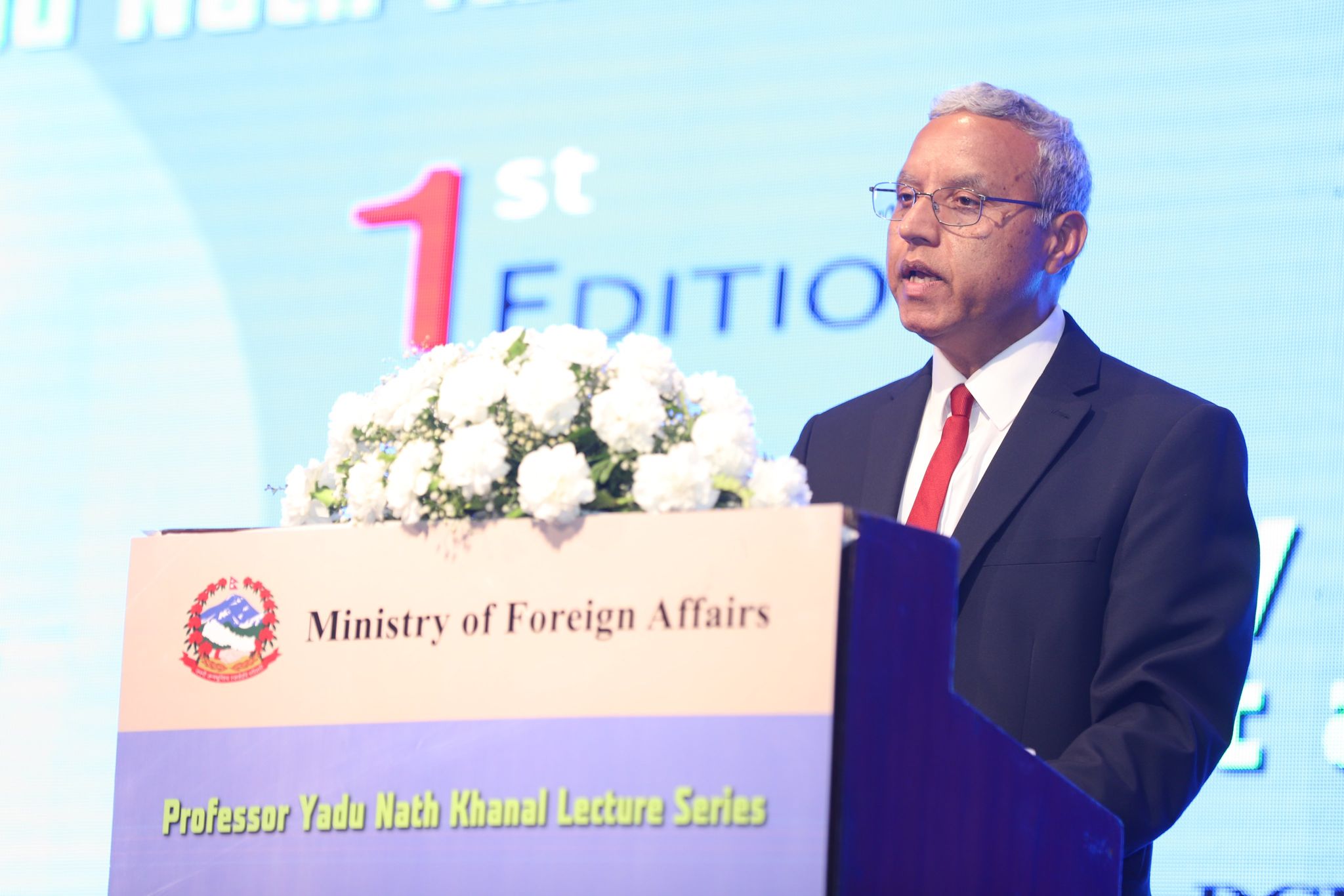 He also left out some major issues of Nepal's foreign policy like BRI and IPS though he made a passing reference to MCC in the context of the question-answer session that followed his one-hour presentation. Similarly, I wish the learned speaker in his fitting capacity as an international lawyer could have at least touched on the scenario of the entry of UNMIN and OHCHR into Nepal amidst fanfare and the inherent difficulties faced by Nepal in sending them back with dignity and honor that our people stressed possibly more disproportionately, as they did everything to stay in Nepal almost forever.

To conclude, it is doubtful if all the prime ministers in the recent past made major contributions in the annals of foreign policy as claimed by the scholar, possibly as a ritualistic exercise. Under this prism, one major lapse is that the name of Tanka Prasad Acharya seems to have been forgotten as he was the one to not only expand Nepal's diplomatic relations but also take important initiatives in terms of planning the establishment of the central bank and the civil service act in his bid to make bureaucracy professional and apolitical, an area Subedi has harped repeatedly.

Despite such minor weaknesses, I congratulate the Foreign Ministry for starting such a wonderful annual lecture series and also Dr Subedi for his sincere efforts to give his imprint on the program through a painstaking presentation.

(With two doctorates in international relations, Bhattarai is a former foreign secretary, ambassador, adviser to President on foreign affairs and writer available at kutniti@gmail.com)