Xi's visit: an important milestone in the annals of bilateral ties

Bhattarai is a former foreign secretary. He also served as the foreign affairs advisor to President Bidya Devi Bhandari during her first stint.
news@myrepublica.com

Chinese President Xi Jinping is paying a state visit to Nepal today and tomorrow. The visit of the Chinese head of the state to Nepal is taking place after a gap of 23 years. Jiang Zemin (who celebrated his 93rd birthday two months ago) was the last Chinese president to visit Kathmandu. President Jiang is taken as the third but the first successful Chinese leader promoted by paramount leader Deng Xiaoping.

First, let me talk about something about President Xi. Xi represents the fifth generation of Chinese leadership in the post-1949 era. He is the core leader, General Secretary of the Communist Party of China, President of China, first among the members of the powerful Standing Committee of the Politburo, and, last but not least, head of several important commissions that include powerful supervisory and oversight bodies relating to security, foreign affairs, comprehensively deepening reforms, financial and economic affairs, etc.

These responsibilities along with China's ascendancy in the realms of economic and military might make Xi possibly the most powerful leader of the world. He is also taken as the third most important but most visible head of the most populous state of the world with Mao's role more pronounced as an all-encompassing ideologue and revolutionary under the image of a powerful helmsman and Deng Xiaoping's status as a great reformer and pragmatic statesman but without assuming any formal power. 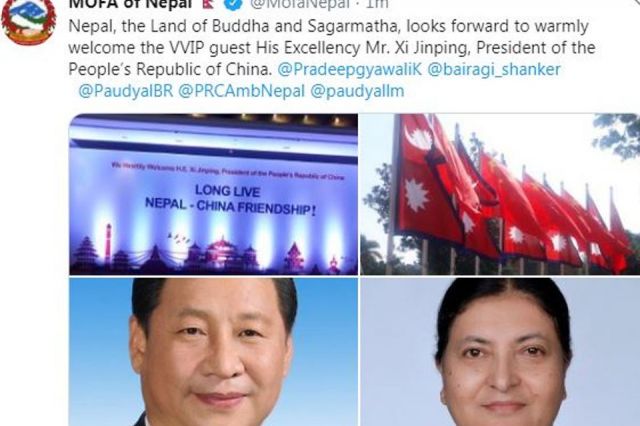 Xi and his family

That the constitution of the country that used to provide two consecutive terms of a total of ten years for top leaders in China has been amended also speaks of the long-term role and all-pervasive influence of the charismatic leader of China who celebrated his 66th birthday last June. Son of Xi Zhongxun, one of the elder leaders of China's first generation who faced purge along with many top leaders during the Cultural Revolution and served the country as first Secretary-General of the State Council, chief of party propaganda department, vice-premier and vice-chairman of the national legislature, President Xi before his ascendancy to top party and state positions in 2012-13 was eighth Vice-President of the country.

Father of a Harvard University-educated daughter Xi Mingze, 27, the only child of the parents, Xi's spouse is Peng Liyuan who will celebrate her 57th birthday on November 20. Before her husband's rise to the top post, it used to be joked in diplomatic circles in Beijing that the President was known as her spouse rather than the reverse case as is now.

Peng is the former President of the People's Liberation Army Arts College as she had the position of what can be called the rank of civilian general. She is one of the most accomplished folk singers besides being an actress of opera, professor and health promoter even though she does not have any active position now in tune with the system prevailing in her country.

On the eve of his visit to Nepal, President Xi's signed article titled " "Toward Greater Progress of China-Nepal Friendship across the Himalayas" appeared in mainstream Nepali media.

There is absolutely no doubt that Xi's write-up is quite concise, up-to-the point and comprehensive in the sense that it has briefly touched on the glorious history of bilateral ties transcending 1600 years of bilateral exchanges. It highlights four basic and fundamental attributes of Nepal-China relations after the establishment of formal diplomatic relations between the two countries.

We have no dearth of official and non-official experts and specialists on foreign relations that too on the modality of our ties with neighbors including recent remarks by many such worthies and notables with innumerable advices, suggestions and recommendations many of them looking more prescriptive as if the government should implement them immediately, President Xi's scrupulously outlined four broad agenda for consolidating bilateral relationship for mutual benefit and advantage are a clear testimony to China's mature and highly professional handling of foreign affairs and diplomacy in contrast to rather amateurish and neophytic conduct of foreign policy as is the case in many countries that have yet to learn that after all diplomacy is a job of trained experts.

President Xi's visit is an important milestone in the annals of Nepal-China ties of friendship and cooperation. Let us hope that the State Visit would be highly successful to achieve its cherished goals and we really learn from best practices of the others rather than boasting that we are the best experts equipped and trained enough to teach others. We also need to develop the habits of reading and listening to others rather than speak rather too much on many sensitive issues. After all, our forefathers with little education and less exposure to the world had conducted our foreign policy much more efficiently with little controversy for such a long time to the admiration of many foreign experts on Nepal.

(Bhattarai is a former foreign secretary. He also served as foreign relations advisor to President Bidya Devi Bhandari during her first stint.)

KATHMANDU, Oct 8: New dimensions are being added in the age-old relations between Nepal and the People's Republic of China... Read More...

5 teams advance at Euro 2020 without playing
8 hours ago