A brief history of buttons 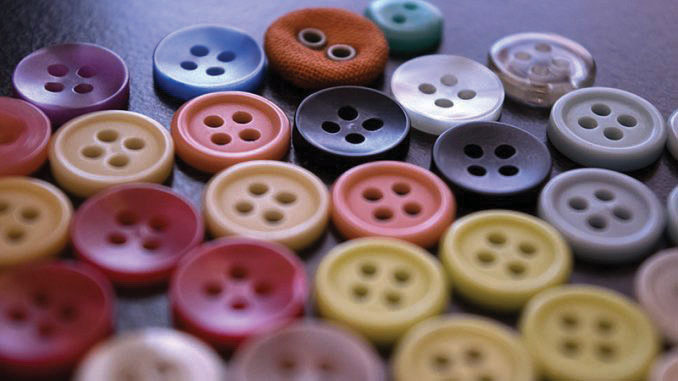 Those little round discs, there on your shirt and pants have a lot to tell about you, your personality, your choice, your likes and dislikes

Yes, buttons. I know they are the simplest of things. Some might be thinking what is so special about buttons to even think of writing about. If you think so, imagine missing a button on your pants for a second! Disaster. I know.  You will be eager for someone to sew that button on as soon as possible, so you can wear it.  That is when you realize the importance of buttons in your life.  Did you know that like anything else, buttons also have a history attached to it?

Never thought of it that way right? Well it does.  Yes, those little round discs, there on your shirt and pants have a lot to tell about you, your personality, your choice, your likes and dislikes. Though we are not willing to accept they are an important part of our life.  After all, they protect us from immodesty. Have you realized that often they give us something to do with our hands in nervous time?

I know we never even give a second thought at their colorful life and their journey through the ages.  Today I am going to take you through that journey and at the same time explore the fascinating story of how the button went from prehistoric necessity to multi-functional modern day essential.

Join me as I tell tales of kings and queens in a brief history of a button as I trace it from prehistoric times.  Sounds interesting? Let’s jump into our time machine and set the time to Phoenicia, 3000 BC, to explore the origins of buttons. Of course we will have to take a little help from archeologists. They have taken a lot of trouble digging up ruins and found many things. Upon close examination some of them objects resemble buttons. Some are round, some gold, some bone and some clay. Some are plain, others engraved with designs. But are they really buttons? Probably not as a functional fastener, but were certainly an ancestor of the modern button. Now that you are interested a bit, there are few questions that you want answered, right?

First buttons
‘So when were buttons used for the first time?   What was used to secure clothing before them?’ Humans always needed fasteners to hold their clothing together ever since prehistoric times.  They used pins made of bones that were woven in and out of the animal skin.  Actually, buttons date back to prehistoric times, but it was much later that they were used to fasten clothing together. Now let us come a bit closer to home, to Indus Valley Civilization.  I am sure you have heard about it. It’s in Pakistan.  Archeological findings there revealed button like objects dating back to around 2000 BC.  These objects were not used as fasteners, but as ornaments.

During those times, pins, leather lacings and belts were used for securing clothing. Early Greeks and Romans used shell, and wood buttons, sometimes attaching them to pins. Other early European ruins unearthed buttons of ivory, bone, jeweled gold and silver.

The invention of the first button and buttonhole closure system dates back to the 13th  century in Germany. That’s when buttons became fasteners for clothing. ‘Why?’ you ask.  The reason being a change in clothing style: from loose robes held together by pins and strings, to fitted dresses and suits. This invention of course solved the problem of securing clothing that was becoming more and more form-fitting, without having to resort to sharp pins.  Since then buttons and buttonholes covered the clothing of all rich people. The number of buttons on the clothing and the material they were made of became status symbol. At the time buttons were made of gold, silver, clay, wood and pewter, some were even made of diamonds.

What buttons did
Pretty soon buttons became a fad. Rumor has it that King Louis XIV of France spent five million dollars just on buttons during his lifetime. That is interesting.

There is yet another amusing rumor about the buttons on the sleeves of coats.  I know you too thought those buttons on the sleeve of your coat were just decorations with no purpose. Sorry to disappoint you. There indeed is a story behind this.  King Frederick the Great of Prussia (a German kingdom from 1701 to 1918 that included present-day northern Germany and Poland) started this practice in the 18th century.  Rumor has it that after an inspection of his troops, he ordered buttons to be sewn on the sleeves of their coats to discourage them from wiping their noses on them. Yes, so you see funny though it may be, buttons were functional after all at the time.

Can you think of any other use of buttons? No? Can’t think of any? I will give you one clue. During Civil War, American soldiers often carried small amount of gold in hidden compartment in the buttons that secretly opened. The gold gave them ‘trading power’ if they needed to use, either to bribe guards or pay ransom for a captured friend. Such buttons were also popular during World War I and II to carry messages, poisons, miniature compasses, and even pictures of loved ones.  You see buttons were important not just to hold clothing together but also for other purposes.

Finally, on a serious note, it is important not to take anything for granted.  Even the smallest of buttons have their importance.  Those humble buttons can be many things: an adornment, a fastening, a thing of exquisite design or a practical element meant to blend into the background. We all owe our thanks to those quietly unassuming but endlessly useful little item that is found almost everywhere you look.  From the living room sofa with its pretty upholstery buttons, to the cushions and pillows on our beds and the hats, coats, trousers and bags in our wardrobes.  It is a lesson to all of us that nothing is useless.

This is something we owe to teach our children. Everything has its value and importance in our life.  Life is too short to differentiate and discriminate.  Respect and value what you have in life.  Now that is not too difficult to explain to your children, right parents?

Pokharel is an educationist and author of several children’s books.