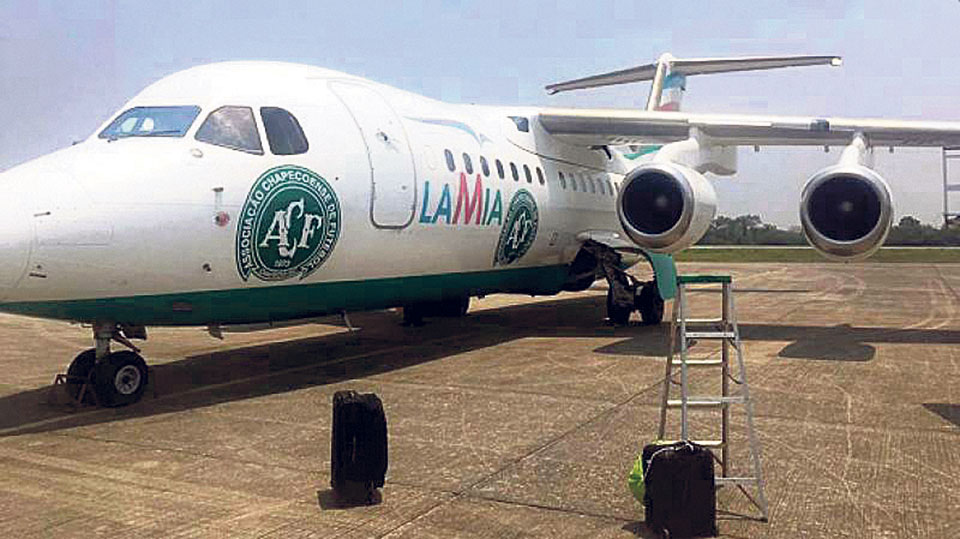 Airlines flying in to Kathmandu make sure that they have enough fuel for long hold ups, either due to cracks on the runway or a disabled aircraft or that parking space is full

It is accepted that overbearing confidence sometimes leads to unwarranted consequences. This happens too often in our everyday life. At times we get impatient trailing an overladen vehicle occupying the middle of a highway. Few years ago a well known personality got killed in an accident that should not have happened in the first place. Had he been as law-abiding, as during his bureaucratic days, he would not have overtaken from the wrong side. He perhaps faced similar situation on an open highway thinking it was safer from left than right.

With the above prelude this piece attempts to focus on the horrendous air accident that almost totally wiped Chapoceoence football team of Brazil headed to Medellin (Colombia) for Copa Sudamericana final. The team flew from Santa Cruz (Bolivia) for the 1605 nm trip onboard Bolivian Charter Airline LaMia on November 28, 2016.

Even with improvements in safety aspects globally, air accidents will still happen. Record show accidents have become progressively less frequent over the years. The most each airline and overseeing agencies need to do is to identify and redress deficiencies primarily under Operations/Maintenance/Training (OMT) headings. Ideally, anomalies need to be identified in advance, but it is easier said than done. No matter how vigilant one is, someone, somewhere along the task chain, involving hundreds of men, will err sometime. Cumulated over time, it can flare up as minor incident, if one is lucky.

The aircraft involved was a British made small jet, BAe-146 (or AVRO RJ85) able to seat no more than 112 but it still had four engines. It was conceived as an aircraft suitable for feeder airlines connecting airports like London City. Naturally, it had to have a short take-off capability but still be able to fly quietly. It was initially conceptualized with two engine but those available in the 80s were not powerful enough but were far too noisy to be appropriate. Having found a lesser thrust engine that met both requirements it ended up being a 4-holer instead. In fact, its engines are so small that it is often referred as the only aeroplane with 5 APUs. Auxiliary Power Unit is a tiny, unseen, jet engine in the tail cone, that helps provide power while on ground.

Questionable history
LaMia is seen to have a questionable history. It operated charter flights with a fleet of just two. One cannot help but shake one’s head in disbelief on seeing the blatant flaw in the flight plan that showed “flight time” and total “endurance” as exactly the same. Endurance is the duration an aircraft can remain airborne with the amount of fuel on board. That means Flt-2933 would have its fuel tank dry after 4h 22min. As the said time elapsed, the fuel dried out and the aircraft crashed, killing 71 people.

Normally, one has to ensure that the aircraft has enough fuel (a) to the destination plus (b) have reasonable amount for holding in the sky, due to traffic or weather, plus (c) further fuel to be able to fly to alternate airport, if required and (d) even have some reserve left after landing there. In other words, the flight had to have fuel well above that needed to fly straight to the destination even under the best of time and weather.

Airlines flying in to Kathmandu make sure that they have enough fuel for long hold ups. Here it could be either due to cracks on the runway or a disabled aircraft or simply that parking space being full or even due to delayed VVIP departure going beyond NOTAM period. Swallowing more than it could chew, TIA is functioning more like a disorderly bus park.

Tragedy of errors
Coming back to LaMia, the flight dispatcher seems to have alerted the Captain about the grave error. But Captain Quirogo said to have overruled, saying it was okay as he could do it under that. The system’s safety catch was knowingly breached by the emboldened Captain. It is suspected that he did the same in two earlier occasions that went unnoticed. But the question is what was he trying to prove? Was he so conscious about the carbon footprint that he did not want to carry a drop more than required, or the ATF was cheaper in Columbia than in Bolivia to justify full tankering at the destination? Even if it was so, the flight safety should not have been jeopardized in the manner he did.

It is usual for airlines to do so due to big price difference, RA jets are said to be getting filled up to the brim in airports outside Nepal for the same reason. Likewise, most airlines do not usually fill here unless in dire need. As acknowledged, ATF price is kept high here in order to subsidize other type of fuel used by the general public.

But contrary to anticipation, he was required to hold. Strangely, despite being on the verge of do or die situation the Captain remained surprisingly calm continuing to fly as directed by ATC. He was in the hold for 13 long minutes before he finally raised the alarm. But it was much too late as the engines were getting starved of fuel already. It was engulfed by series of events beyond anyone to control for as with no engine there was no electricity for navigation or for communication. He could still have just made it as he was barley four minutes away if he was able to make straight approach. But unfortunately for him there was another aircraft that needed immediate landing because of an emergency.

We see a stark similarity between the two accidents. In both the cases, the person in the driving seat or in command was complacent enough to knowingly err. It is an even bigger tragedy that both ended dragging other innocent souls along.

KATHMANDU, Sept 13: A tire of an aircraft of Nepal Airlines Corporation (NAC) from New Delhi got flattened while landing... Read More...

Why did Ilam’s Prem Acharya choose the path of self-immolation?
15 hours ago

Are We Prepared?
18 hours ago

We will proceed according to the law regarding Sandeep's return to the team: CAN President
9 hours ago