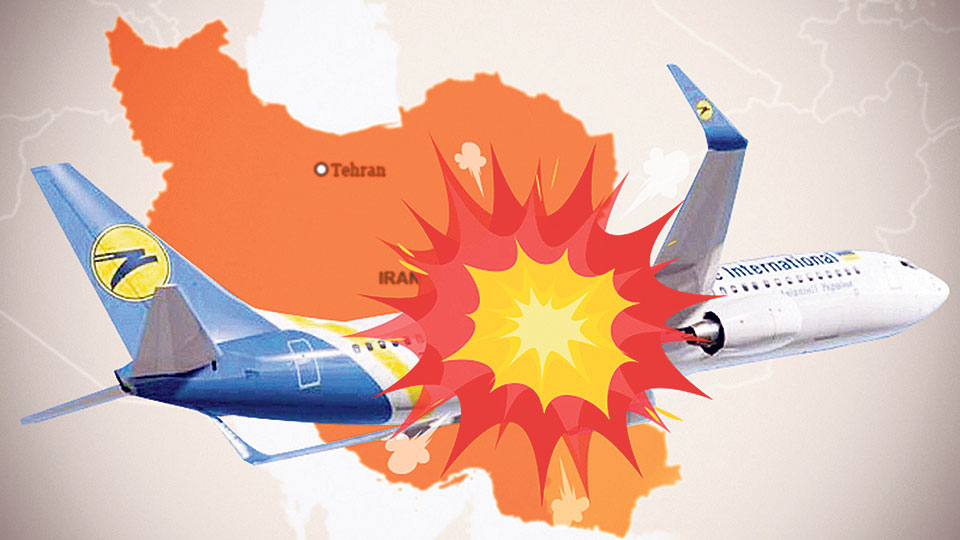 It was a period of heightened tension when the flight in question took off. Tehran airport was kept operational even as Iran had expected retaliation

I just could not avoid talking about Ukraine International Airlines (PS) horrendous misfortune this time even if wishing to move to another topic. Writing on different aviation aspects carries a risk of being contemptuously labeled as “one person expert” by people within the fraternity. Even as one such comment came to be known through social media, but the person labeled thus remained unnamed. I, for one, feel secure and proud for having no other credentials, on matters related to aviation, than as an “aviation geek”. No one should feel discomforted by what I usually write about, in manner I do. I may pose questions, interpret things differently, suggest extreme solutions or even have serious misgivings about projected benefits of mega projects. I am free to agree, disagree or to reason in a civilized manner as it happens to be as much of my prerogative as theirs.

Tragedy in Tehran
With above clarification in order, we now move on to Tehran. There is no point repeating details already known except that the flight was operated by a B737-800 (not MAX). The aircraft was delivered new in 2016 and was given a clean bill of health just two days earlier. It departed Tehran (IKA) at 0612 local (0242UTC) and was about an hour behind the schedule. Tehran had fine weather with good visibility, low westerly wind at 6 knots and air temperature at -1C. It was listed tenth departing on January 8, the one before was at 0539 and three more after 0612.

Iranian news channels reported firing of some ballistic missiles at US Army base in Iraq at 3AM and at 6AM it claimed having killed some 80 “American terrorists” as the result. It was apparently a period of heightened tension when the flight in question took off. More so, Tehran airport was kept operational even as Iran had expected retaliation especially as there are potential target areas near around IKA. They did not seem to have protocols catering to such eventualities. That aside, even the most basic procedure of setting “squawk code” before departure, one that helps radar identify each flight, seem to have been blatantly ignored. The air defense unit seemingly had no communication link with Tehran departure control. It would not have come to this otherwise. It was only at 0830 that Iranians gave the news that the Ukraine Airlines plane had crashed with 176 on board.

Further, Iranians kept on claiming, for full three days, that the B737 had engine malfunction. Pilots would have had enough time to state the nature of the problem faced while seeking to land immediately. Obviously, none of that happened despite Iranian claim, twin jets are capable of flying on one running engine, PS752 would too have landed if that was the case. But as the closer image of the fuselage wreckage became available random splinter marks were picked up by keen eyed professional drawing correct inference that missile was the culprit. It was as like MH17 that was brought down, incidentally, over Ukraine in July 2014. The situation there was bad, if not worse, with Russia having annexed Crimea. One expert analysis even deduced that the Iran fired missile must have exploded just beneath the cockpit, killing both crews instantly. Signs of shrapnel punctures torn inside provided the irrevocable proof of an external explosion scenario compatible with missile attack.

But in was rather usual for Donald Trump, of all the people, to have presumed that Iranian had “mistakenly” fired the missile. This possibly reflects the guilt embedded in the US administration memory for having done exactly the same to an Iran Air (IR655) flight in July 1988 that had 290 killed. There are other more serious examples of flights brought down by terrorist’s bombs. But among nations Russia is seen to be no less adept in refusing to accept state’s responsibility in the downing of Malaysian MH17 as like USSR, its erstwhile avatar, had shown no qualms in dispatching fighters to shoot down a Korean Air flight KE-007 (1983). In the interim three days Iran also tried to erase evidence by moving away the wreckage and bulldozing the crash site in contravention of the ICAO protocol about safeguarding of accident sites. But overwhelmed by visual and other recorded proofs Iran had no choice but to finally give in accepting that it had erred.

The figure of 138 heading to Canada out of 167 passengers looked quite high. But as Canada seems to have over 200 thousand of Iranian descent living there, the 57 listed as Canadians probably came from that group. With 139 (82+57) being either Iranian or of Iranian descent, it was no surprise that public went from one extreme of denouncing USA for killing of Qasem Soleimani to other extreme of denouncing Iranian leaders for having brought down the Ukrainian flight.

Unsolved case
The dispute over responsibility for the MH17 downing remains unresolved till date. The West and the Ukraine have blamed Russian-backed rebels while Russia feels it was doing of Ukrainians themselves. The missile launcher used was part of the Russian armed forces as an international team of investigators confirmed in 2018. It came from 53rd anti-aircraft missile brigade, based in the Kursk (Russia). The investigation was based on evidences from different sources including tracking movements of launcher unit and detailed analysis of audio and video images as revealed during the presentation of the interim results of the long-running investigation.

The review of audio recording showed the level of eavesdropping in a situation of high tension where literally nothing remains hidden. They had even tapped phone calls that featured men discussing the transport of the missile system from and then back into Russia. Audio released by Ukraine featured a panicked militant saying MH17 was shot down in the mistaken belief it was a military plane. “It was 100 per cent a passenger aircraft,” he was heard nervously telling his superior. The system was later seen driven back across Russian border minus one of its four missiles. As has come to be known, shortly after the plane disappeared, a post on social media attributed to a Russian army veteran and separatist leader, claimed rebels had shot down a Ukrainian military transport plane.

Person representing a well-known law firm specializing in aviation law said in a recent The Hindu interview that any such happening has to be investigated according to the standards and practices as spelt in Annex 13 of the Convention on International Civil Aviation (Chicago Convention). Additional amendment provides that states should refrain from exercising the use of weapons against civilian aircraft. But, unfortunately, many countries have not ratified this amendment. But while suggesting that states should refrain from such acts, it does not make the act illegal, provided the state had reasonable reasons to believe that the aircraft was on a destructive path. We can, therefore, never be sure that such thing would not ever happen in future given strained relations between countries in the region. This is further compounded by the presence of foreign armies under whatever pretext amidst all this. That combined with “fire first” attitude on all sides only helps in creating a doubly volatile mix. But we can take solace from the fact that Iran acted responsibly, even if late. But we are still baffled as how the three Iranian flights, that took off later, got away unscathed.

North Korea fires more missiles than ever amid coronavirus outbreak

SEOUL, March 29: North Korea fired what appeared to be two short-range ballistic missiles into the ocean off its east... Read More...

Iran has announced that it is withdrawing from the 2015 Iran Nuclear Deal. Pulling out of the deal that was... Read More...

Govt decides to reduce tax on petroleum products
46 minutes ago