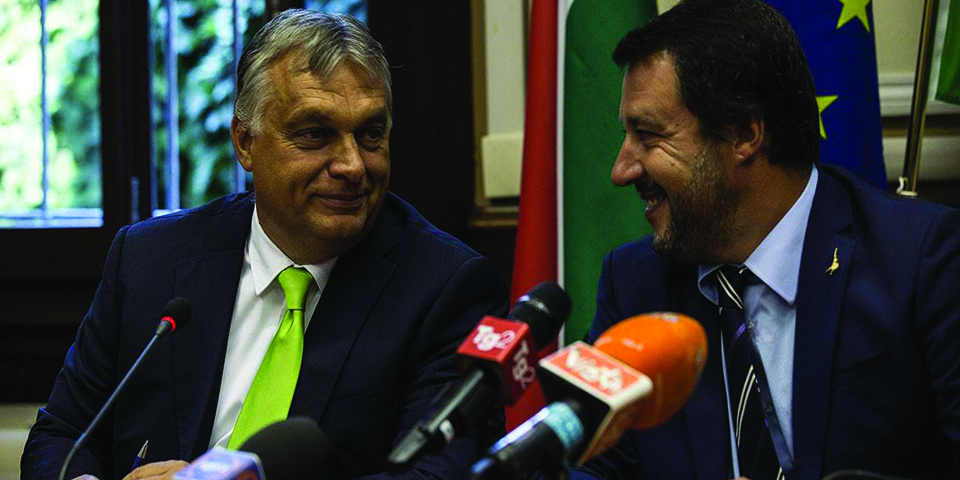 BRUSSELS – European security currently rests essentially on the NATO alliance and the principle of mutual defense, and on cooperation between national intelligence services working to prevent violence against people and national assets. But in an era when threats come from domestic extremists as well as hostile state and non-state actors seeking to undermine democratic institutions, this is not enough.

In recent years, intelligence sharing has stymied countless terrorist plots by Islamist extremists and far-right groups. But failures to share intelligence across borders have also resulted in horrendous attacks in Brussels, Manchester, and other cities.

Belatedly, European security services have also begun to focus on the threat that Russia poses to liberal democracy. Over the course of recent election cycles, the Kremlin has proved successful at compromising democratic processes and polluting public discourse. Making matters worse, the rise of far-right populists in key countries is undermining the security apparatus needed to counter Russian aggression. Intelligence sharing requires mutual trust, but the alliances that once provided the basis for trust are under increasing strain.

This is evident across Europe. In Germany, the former head of intelligence recently suggested to Bild that Austria’s intelligence services cannot be trusted so long as the right-wing Freedom Party of Austria (FPÖ) is a governing coalition partner. After all, in February, the FPÖ interior minister made the extraordinary decision to order a police raid on Austria’s main domestic intelligence agency, removing files and sensitive information.

The FPÖ has had a “cooperation pact” with Russian President Vladimir Putin’s United Russia party since 2016. Most worryingly, the agreement provides for information sharing on issues relevant to bilateral and international relations. If there is reason to believe that information is being transferred from Vienna to Moscow, then Austria could be cut off from a large amount of data essential for tackling extremism and terrorism. And yet that would undermine the security of all Europeans.

In Italy, the far-right League party, which governs in a coalition with the populist Five Star Movement (M5S), has also entered into a cooperation agreement with United Russia. And the League’s leader, interior minister and deputy prime minister Matteo Salvini, opposes EU sanctions against Russia, has been photographed wearing Putin T-shirts, and is a regular visitor to Moscow.

In Hungary, where both Salvini and the American “alt-right” proselytizer Stephen Bannon have been welcomed with open arms by Prime Minister Viktor Orbán, Russian intelligence services have reportedly maintained close ties with far-right groups for years. Moreover, Orbán and his Fidesz party control most of the media, which uncritically disseminates Russian state propaganda.

Finally, in Poland, Antoni Macierewicz, who was ousted as defense minister in January, has been accused of maintaining ties with pro-Kremlin far-right groups and the Russian gangster Semion Mogilevich. While in office, Macierewicz’s attempts to reorganize the army and Ministry of Defense led Poland’s NATO allies to question whether the country could be relied on to counter Russia.

In all of these examples, far-right populists are not just causing friction between national intelligence services; they are successfully politicizing the very institutions and legal instruments upon which European security depends.

For example, just as the Kremlin politicizes Interpol to harass its political opponents abroad, Poland’s ruling Law and Justice (PiS) party has used its veto power as an EU member state to ban one of its critics, the Ukrainian human-rights activist Lyudmyla Kozlovska, from entering the EU’s Schengen area.

It is absurd to think that a human-rights activist could be barred from the EU for criticizing one government while far-right white nationalists like Bannon can freely traipse around the continent fomenting extremism and Islamophobia. EU authorities must investigate the Polish government’s motives to ensure that the EU’s security architecture is not being exploited for political purposes.

Since invading eastern Ukraine and annexing Crimea in March 2014, Putin has waged a complex hybrid war against the West, combining information and cyber warfare with active special operations to disrupt European institutions. To that end, the Kremlin is actively supporting European populist movements and political parties and their efforts to exploit historical tensions and create divisions within the EU.

Such divisions play directly into Putin’s hands. A divided West with less intelligence cooperation is at greater risk of attack and more vulnerable to domestic extremism and distrust in democratic institutions. Putin would like nothing more than to turn the EU into a living hell.

How should concerned politicians and citizens respond? For starters, it is clear that the EU needs its own comprehensive inquiry into Russian interference in European affairs, along the lines of Special Counsel Robert Mueller’s investigation in the United States. Russian financing of European populist groups must be tracked and exposed, and its hybrid-war operations within the EU must be shut down.

Moreover, Europol should be given the power it needs to pursue those who are subverting European interests. Europe needs its own FBI—a law-enforcement and counter-intelligence agency that can work across borders and alongside national-level authorities.

Nothing, however, can replace a well-informed citizenry. In these dark days for democracy, we must all demand accountability from our governments, and insist that the rule of law and our cherished institutions be maintained.

Guy Verhofstadt, a former Belgian prime minister, is President of the Alliance of Liberals and Democrats for Europe Group (ALDE) in the