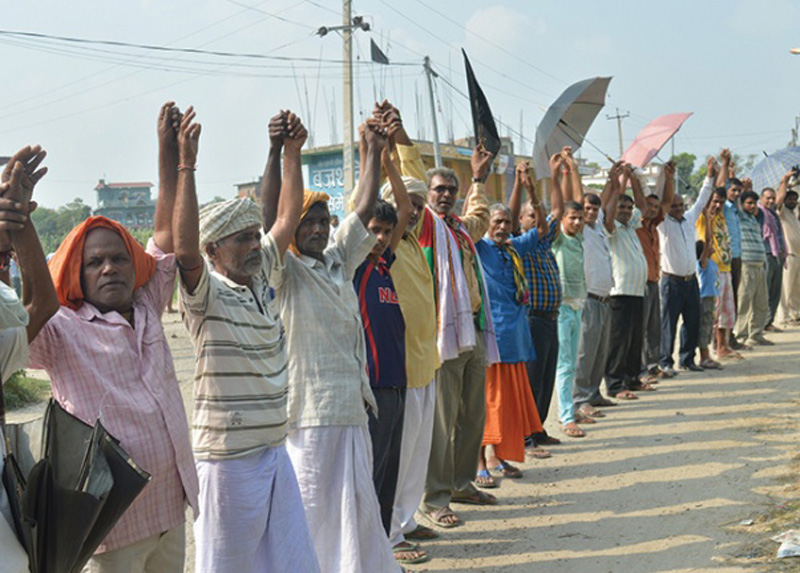 Madhesi leaders do disservice to their constituents when they time and again ask “Are we there, yet?”
Like Nepal, Canada does not have an independence day. Nepal was never ruled by a foreign force. Canada’s Head of State is still the Queen of England (i.e. it is still not an independent country, technically). Therefore, July 1 is celebrated as Canada Day, a celebration of its confederation—the birth of the modern federal Canada. This year Canada marks the 150th year of its confederation. The federal government was intent on celebrating this milestone, and in the lead up “Canada 150” signs popped up right across Canada. In fact, celebrations are planned throughout the year.

The lesson here for Nepal is to know and realize that even Canada—the shining liberal beacon that most other countries aspire to become—struggles to reconcile its past and its future. White European settlers invaded the land and murdered its indigenous people to the brink of extinction. Up until 40 years ago, the Canadian government forcefully took indigenous children away from their parents and put them in what were called the “residential schools” to strip them off their socio-cultural identities and make them “Canadian.” Scholars claim the residential school system did more damage to Canadian indigenous people than centuries of colonization.

How and to what extent should these grievances be addressed without hurting the country’s movement forward? The same question could be asked of us in Nepal, too. There is a large section of the population in Madhes that believes it has been wronged.

Nobody knows what every single Madhesi thinks, but Madhesi leaders have raised the issue of Khas dominance and centuries of marginalization as a grievance that needs to be redressed. I do not think the Khas leaders and citizens deny the fact.

Nepal has taken positive steps to right the historical wrongs. Reservations for marginalized and excluded groups on government jobs and scholarships is an example. Another example is the path towards federalization that we have embarked upon.

However, Madhesi leaders do a disservice to their constituents when they keep asking “Are we there, yet?” No, we are not there yet, and will not be for years to come. That question presumes the end destination is clearly marked and laid out. It is not. It is a process, and it takes time to even figure out what it is that we want, how soon we can get it, and how far we will need to go to get it.

As with the good people in Canada who are attempting to right the historical wrongs, those in Nepal also do not appear to have readymade solutions. That will require time and resources. Centuries of systemic oppression and negligence cannot be resolved on a whim. It is a process and should be seen as such. Demands for instantaneous fixes to inherently lengthy and complex issues do a disservice to the cause.

In the meantime, it does not help the cause if the ruling establishment keeps describing the Madhesi agitation as “foreign sponsored” or “anti-national” or “a problem.” Madhes being situated next to India is a geographical fate that no Madhesi had any hand deciding. However, as with the Mi’kma’ki in Nova Scotia, Canada, the indigenous people in Nepal’s Madhes have been here for a long time. It is amoral to label them anti-national and question their love for the land.

There are competing factions on both sides that benefit from the status quo of unresolved grievances and up-in-arms citizenry. They prefer the country in a perpetual state of chaos.

However, there is no enemy. There are simply unaddressed historical grievances. Madhesi parties agreeing to participate in the delayed local elections is a positive step in that direction.

Anurag Manandhar is a 28-year-old mechanic, who owns a workshop at Nagpokhari, Kathmandu. Originally from Melamchi, Anurag has been working... Read More...

KATHMANDU, July 11: A cabinet meeting held on Sunday decided to give consent to the Office of Prime Minister and... Read More...