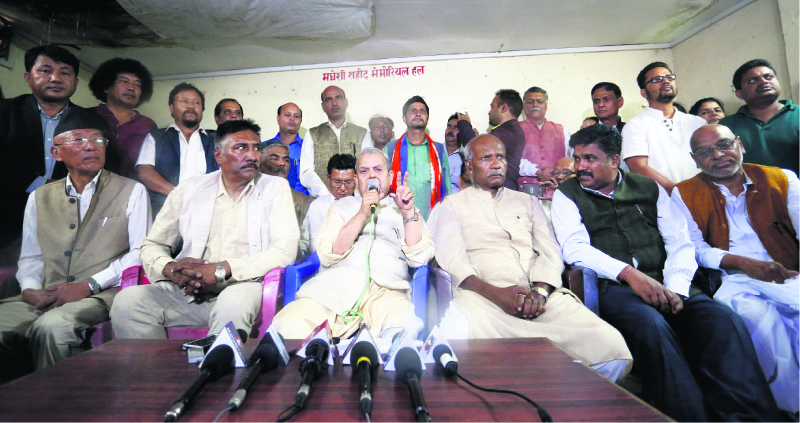 KATHMANDU, May 26: The Rastriya Janata Party Nepal (RJPN) has announced to boycott the second phase of the local polls accusing the government of “not showing enough sincerity to fulfill its demands”.

Organizing a press conference in the capital on Friday, just a week ahead of the date set for candidacy nomination, the party also unveiled a series of protest programs with an aim to disrupt the second phase of the local polls slated for June 14. The week-long protest, which is scheduled to begin from Saturday, aims among other things, to disrupt the candidacy nomination process and poll campaigns.

RJPN leaders said that they were compelled to take the decision to boycott the polls due to “government’s apathy toward implementing past understandings reached with the agitating parties”.

“We were hoping that the constitution would be amended before the polls as per a three-point agreement reached between the government and agitating parties. But the Nepali Congress and CPN (Maoist Center) appear to have made up their mind to go to the polls without doing so. This is betrayal,” RJPN leader Mahantha Thakur said. He said that the government had shown similar apathy toward increasing the number of local units and fulfilling other non-political demands of the party.

“The government should make sincere attempt to bring us on board the elections process. If that doesn’t happen, we will strongly oppose the polls,” another RJPN leader Rajendra Mahato told Republica. The first phase of the protest program scheduled to begin from Saturday seeks to disrupt election process including candidacy registration by the political parties.

The announcement comes as a big blow to the governing parties which were hoping that the RJPN would eventually decide to participate in the elections.

The announcement of the party “to take extreme measures to foil the polls” has raised doubts on whether the government can hold the elections in fair and effective manners.
Though RJPN has considerable support base in Province 2, the extent of challenge the party could pose to peaceful elections remains unknown.

If the protest program has come as a test for government to hold free, fair and peaceful elections, it also comes as a test of whether the RJPN can maintain the momentum that brought tens of thousands of people to a series of unprecedented protests in the months before promulgation of the constitution in 2015.

Observers say the protest program is unlikely to have considerable impact on the elections due to decision of other Madhes-based parties to contest the polls. Federal Socialist Forum Nepal and Nepal Loktantrik Forum Nepal have decided to take part in the election.

Talking to Republica shortly after RJPN’s decision to boycott polls, Federal Socialist Forum Nepal Upendra Yadav said that his party will indeed participate in the second phase of local elections.

“Our party (Federal Socialist Forum Nepal) has already decided to participate in the elections. We will take part in the elections like we did in the first phase,” Yadav told Republica. The local polls, Yadav said, was important to institutionalize the historic achievements including federalism and republicanism.

Yadav, however, clarified that the struggle for ‘equality and inclusion’ would continue even after the elections. In a different context, Yadav expressed dismay at the Supreme Court’s staying of the government decision to increase the local units. He, however, said that there was no choice other than to respect the decision of the court.

“The decision to increase the local units came too late. The government should have increased local units before the second phase. We have no choice but to respect the verdict of the Supreme Court,” said Upendra Yadav.

RJPN threatens to disrupt polls in other tarai districts too

KATHMANDU, June 15: The Rastriya Janata Party Nepal (RJPN) on Thursday said there will be no change in its plans to... Read More...