The event began with 1974AD’s hit performance, ‘Mutu Bhari Bhari’. Then the bassist for the band, Nirakar Yakthumba recalled his early days of the 1974AD. “We started 1974AD, 25 years ago. Nepali music was different back then. Our album, ‘Samjhi Baschu’ was released in 1998 AD. During that time, the music we do was not seriously taken. We were committed, I guess. Many people said it was impossible but we had a dream to do something for the music. Due to that, we have achieved a lot.”

When Manoj Kumar KC, the guitarist joined the band, people mostly preferred modern songs. “That time even came when people would prefer to check western songs than Nepali ones. However, ‘Samjhi Baschu’ became the milestone.” 1974AD is the first band of KC. He added, “From the day I joined 1974AD, I have been loyal and dedicated to the band. Actually, we all are.”

During the event, drummer and percussionist Sanjay Shrestha shared how he joined the band. Shrestha said he was in an instrumental band called Shristi before 1974 AD. “I was a big fan of 1974AD. Still, I am. Once I was touring the US with Shristi, we listened to 1974AD during the whole trip. When Nirakar dai invited me to join the band, it was like a dream come true. I have been associated with this band for over 20 years and I cannot describe in words about how happy I am.” After doing albums and playing national and international live shows for two decades, the band called a break in 2014. Different rumors started about the break-up. No matter what people commented, the band members really didn’t accept the broken up thing. Explaining more, Yakthumba said, “We didn’t have agenda when we started as we were just playing because of our love toward music. However, in 2009, Phiroj Shyangden moved to the US due to his personal reasons. Even after that, we tried really hard to push things up but the obsession wasn’t there. The band became void, subsequently. And there was Adrian’s solo career. It created miscommunication and misunderstanding. That’s why we called it a break.”

Yakthumba cleared the rumors about firing Adrian Pradhan off the band. “He was doing his solo thing. We never fired him and he never said he’d left the band. We just had to take a break due to our lack of passion.”

Commenting more, Pradhan joked about the load-shedding being the problem. “Due to a powercut, the studios became closed and we weren’t able to do new music.” Nevertheless, Pradhan reasoned it was the negative energy within the band for the break. He added, “Let’s forget about the past. We are pumped up now and fully inspired by the fans.”

So, what brought the band together? The answers to that question are music, fans, themselves and as Pradhan would add, “Money too (laughs).” The reunion would be hardly possible if the band members hadn’t realized the importance of being together, said Shrestha.

Even during the break, Pradhan would check every comment from the fans who wanted the legendary band to be back. “I used to feel like I had committed a sin of not joining my brothers. They have really inspired me to get back together.” As asked Shyangden on a video chat about how he’s feeling toward the reunion, he said he’s really excited to play with rest of the band members.

The happiest news to Nepali music fans is that the band, 1974AD is coming up with their tenth album around the end of 2019. Yakthumba commented, “We have already started working on a new album. We have so many songs that we are not even sure which to include in the record.” Likewise, KC added, “One thing is for sure – this album is going to be different.”

1974AD started around the late 90s. Since then, the band has done 9 albums. Their last album, ‘Hazaar Sapana’ was with the new lineup including Rohit John Chettri on vocals/guitars, Prajjwal Mukhiya on vocals/keyboards, Jacko Wacko on trumpet and Pratick Baniya on trombone. 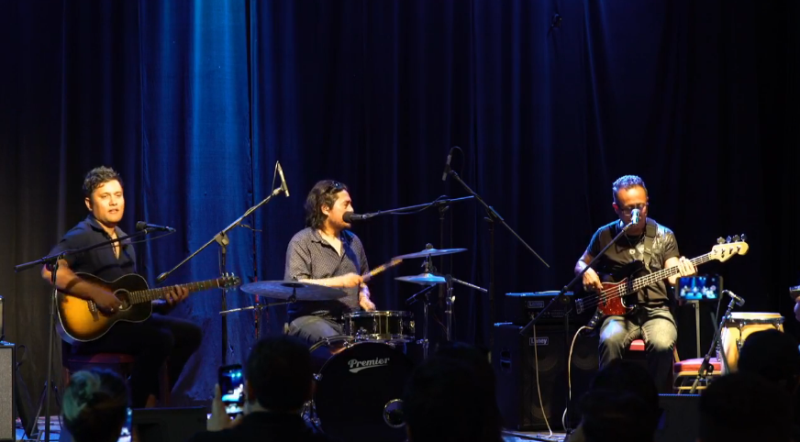