Three different musicians, already associated with their own bands came together with a powerful trio and named it Shree 3 (pronounced as Shree Tin). Comprising of Sarad Shrestha (vocals and guitar), Rozet Gurung (bass) and Robin Neupane (drums), Shree 3 is a rock band trying stone rock, desert rock and grunge. The band is releasing their debut album, ‘Drabya Dharma’ after three years since the formation.  The album will be launched at Purple Haze Rock Bar, Thamel on May 18. ASM, Kaagaz and Hermeneutics of Suspicion (H.O.S) are lined up for the supporting acts at the launching event.

If you are a music enthusiast who is into Nepali rock and roll scene, then Sarad is not a new name for you. Sarad has contributed as a guitarist for bands like Black Wizard, The Sound Mill, The Axe, Kathmandu Mayhem, and Intellectual Morons. Currently, he's associated with the rock band Tumbleweed Inc. and all-star Nepali band Project One along with Shree 3. 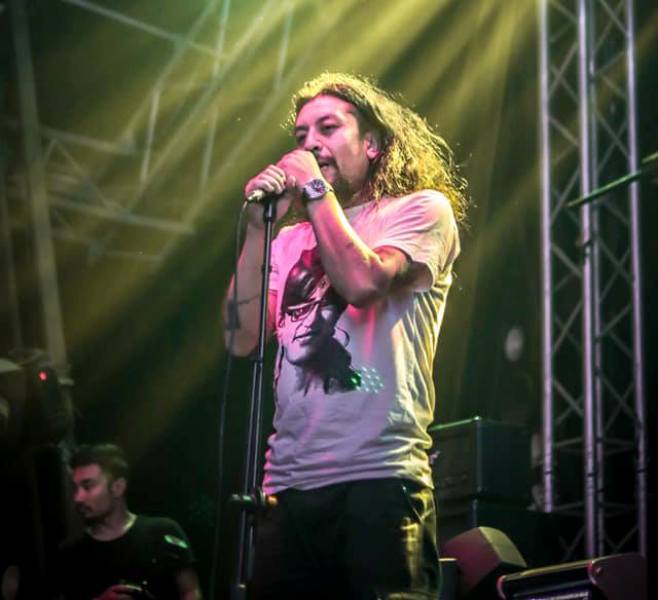 It has been over two decades for guitar maestro Sarad in Nepali music fraternity. Sarad also features with the vocals in this album. I interviewed him about Shree 3's debut album, 'Drabya Dharma'. Here’s what he had to say about the album:

What is ‘Drabya Dharma’ trying to tell? What does the title reveal?
Drabya is a Sanskrit translation for money. We also have a song of the same name in the album. The core of our album is themed on how money has become a religion these days. We do anything for it as it has already enslaved us. Bringing awareness is what we have focused on this album.

What drew you to form this band and record an album in the first place? What took you so long?
We three already had bands. I and Robin were playing for Tumbleweed Inc. Likewise, our bassist Rozet was doing metals. And during the grunge tribute show, as we were playing together, we felt the chemistry between us and that was unique. So, that led us to form this band.

At first, we weren’t serious as this was formed only for fun. But during our first jam, while we were playing, we instantly composed a song. The idea of working on the album struck us post the incident.

‘Drabya Dharma’ is finally reaching out to the music listeners after three years since the formation. The thought is that we just wanted to take it slow and do something to aware people.

Why not vocals before? Why in Shree 3?
When I was in The Axe, I never thought of singing as I enjoyed playing the guitar. It was the same with Tumbleweed Inc. where singing for that band was never in my mind. Thankfully, small local events, tribute shows and encouragement from brothers from Shree 3 have led me to try vocals. It has been going good so far.

Are there any particular songs in the album that you feel connected to because of its lyrics? If yes, how?
All the songs in ‘Drabya Dharma’ carry different meanings and try to say something. ‘River’ is about a fight for freedom. ‘Sanity Wreck’ is about turning ourselves into a monster. However, of all the songs I have written for this album, I personally feel connected to a song named ‘Bipana’. I wrote that song when I was at a depressed state of mind. That song is special to me.

How are you guys releasing this album?
This is a time of technology so, the album will be available on music streaming and on limited CDs. However, we have thought of releasing the album in vinyl and cassettes for our friends who live in foreign countries and also to recall the old days.

What are your expectations from ‘Drabya Dharma’?
Maybe the stoner rock and desert rock will be introduced. It is just my thought.

Any tour plans?
Well, we haven’t thought much about touring. Also, since the formation of the band, we haven’t done many gigs. I think we’ll tour Nepal first. And then, we will think about touring abroad.

Working for the girls’ empowerment and education