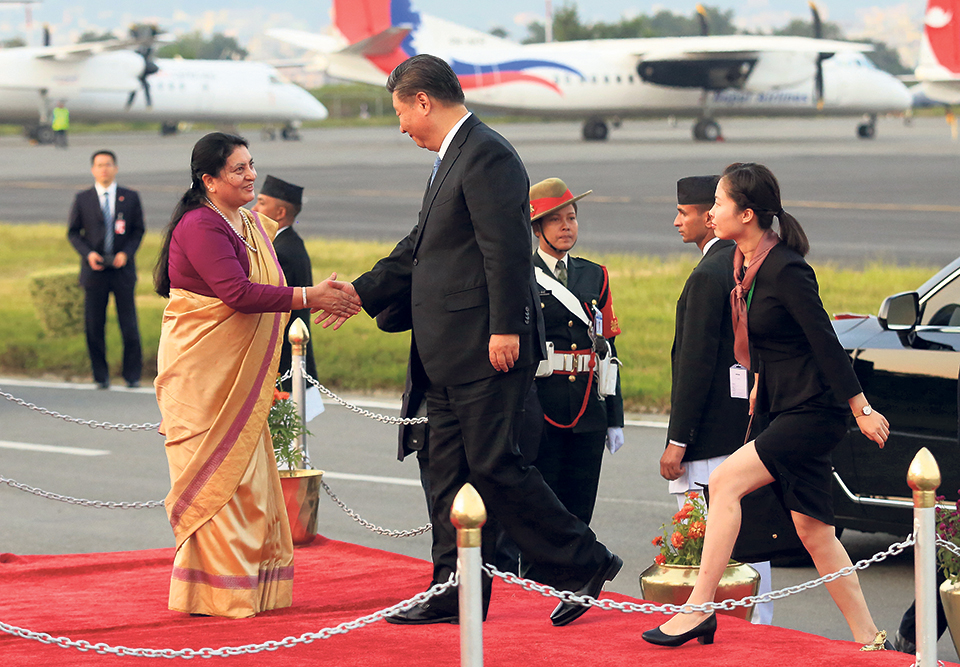 KATHMANDU, Oct 13: Chinese President Xi Jinping was given a warm welcome by the government and the people as he arrived in Kathmandu on Saturday afternoon.

Nepal’s President Bidya Devi Bhandari reached to the aircraft to personally welcome Chinese President Xi Jinping when he landed at Tribhuvan International Airport in Kathmandu for a two-day state visit on Saturday.

Such courtesies, although uncommon as the visiting head of states are usually welcomed by cabinet ministers or even senior bureaucrats, is not entirely new as late King Birendra and Sher Bahadur Deuba had jointly welcomed Jiang Zemin during his trip in 1996.

On Saturday, Xi was given a guard of honor by a platoon of Nepal Army personnel minutes after landing at the Tribhuvan International Airport.

As Xi and his entourage drove from the airport to Soltee Hotel, Soltimode, thousands of government staff, Chinese residents and some commoners carrying Nepal-China flags cheered and hailed Nepal-China friendship.

Later in the evening, President Bhandari hosted a grand reception in honor of Xi and his entourage. A Nepali band performed a fusion of Chinese and Nepali songs at the reception at Soltee Hotel attended by around 300 people.

The government had left no stone unturned in ensuring a fitting welcome to one of the most powerful leaders in the world.

On Saturday morning, PM Oli himself made sure that all potholes along major roads were fixed and blacktopped, sidewalks bedecked with flowers and gardens.

The government has announced Sunday as a public holiday.

UPDATE: Five dead, 12 injured in a road accident in Pyuthan
22 hours ago

Ward chairman missing in an accident found
4 hours ago