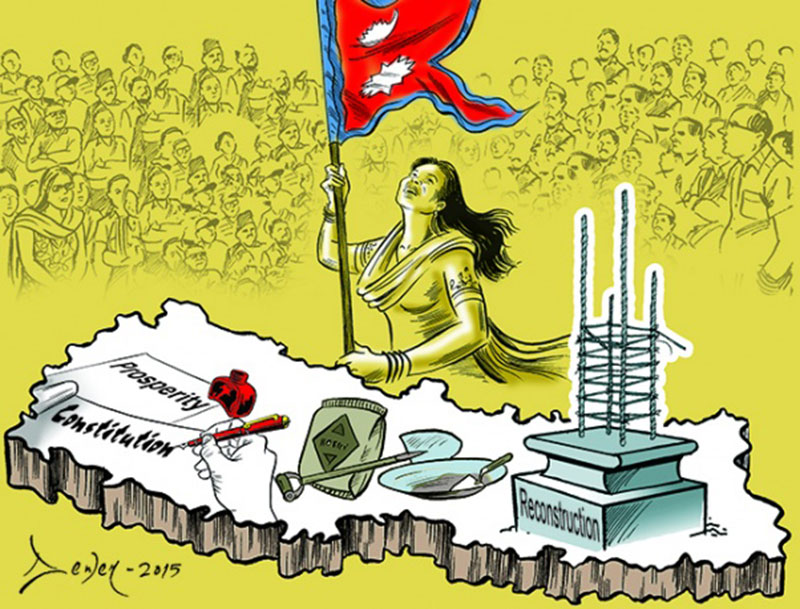 The generation that will lead Nepal in 2030 will be driven by pragmatism rather than ideologies of the bygone era that consumed their parents
With a new Constitution that embraces inclusive, pluralistic democracy, and a mixed market economy with egalitarian and socialistic aspirations, Nepal seems ready to embark on a path of rapid economic development. There is a chorus of political leaders saying our multiple political revolutions are now finally over and the time has come to focus on an economic revolution.

Surrounded by two of the world’s largest and most vibrant economies, enjoying tremendous goodwill and support of the international community, and with its own abundant natural resources and spectacularly beautiful landscape that could make it the world’s premier tourist destination, the stars seem fully aligned for Nepal’s economic take-off.

With such positive alignments and no domestic or external threat to its peace and security, Nepal ought to easily realize its vision of “graduating” from the status of Least Developed Country (LDC) by 2022, and join the rank of a middle-income country by 2030.

However, several formidable challenges stand in the way of realizing this vision. Foremost among these is a debilitating disease that has infected Nepal’s body politic: the dominance of powerful cartels and syndicates. In the guise of legitimate trade union activism and collective bargaining, syndicates and cartels of various interest groups brazenly flout the rule of law, make unreasonable demands from the government, discourage healthy competition and innovation, and act against the best interests of consumers and citizens.

Many of these syndicates operate as fraternal organizations of political parties and enjoy their protection and patronage. With the aim of extorting money and often using hyped up nationalistic or jingoistic slogans, they oppose and obstruct development projects. Thus teachers’ unions unite against any attempt to discipline non-performing teachers. Private medical colleges are allowed to operate without minimum required infrastructure or qualified personnel. Cartels of manpower agencies blatantly cheat poor migrant workers. Transport owners and taxi drivers demand the right to operate unsafe vehicles and resist entry into the market of better, safer, cheaper alternatives.

The worst and most corrupt of all such cartels are the unelected and unaccountable “all-party mechanisms” that replaced elected local governments nearly two decades ago. They collude to siphon off huge sums of local development funds for their pet projects, manipulating tenders, bribing inspectors and condoning shoddy work.

Even the elected coalition governments at the national level operate as cartels in allocation of budgets and contracts, and appointment of officials including ambassadors, judges, university professors and military officers on the basis of sharing of spoils, known as political bhāgbandā.

Such politicization of public institutions, including the civil service, distorts national priorities, subverts rational decision-making, exempts officials from accountability for results, and erodes people’s faith in our institutions.

In its attempt to accommodate many competing ideologies, Nepal has concocted the fusion of the worst elements of the capitalist and socialist systems: crony capitalism instead of a more enlightened welfare capitalism, and party-based cartels and syndicates regulating public and private enterprises instead of democratically-functioning regulatory bodies. The consequence of this has been that shady politics always trumps over sound economics.

The experience of most other countries that have achieved rapid economic growth and sustained social progress indicates that the most important factors for their success have been a combination of good governance, rule of law, political and social stability, under a broadly democratic framework. At present, Nepal is sorely lacking many of these ingredients for success.

Nepal’s new constitution has instituted a mixed proportional representation system in legislative bodies that makes it virtually impossible for any party to win a majority. With dozens of political parties and without any minimum threshold for representation in the parliament, even fringe parties can hold national politics hostage. Thus Nepal seems doomed to have unstable coalition governments always struggling for their own survival, and unable to take bold decisions or to remain in power long enough to implement them.

A further complicating factor is the challenge of setting up federalism which is likely to be time-consuming and expensive. There is a real risk that the political and economic power and perks historically concentrated in Kathmandu will simply be devolved to a handful of federal headquarters rather than to far-flung villages and municipalities.

The hope for overcoming this pessimistic scenario lies in the fact that increasingly Nepal’s younger generation is unlikely to accept or tolerate this state of affairs. In the past illiterate and innocent Nepalis were often swayed by revolutionary slogans and catchy promises of political demagogues. Having experienced all kinds of political experiments with little tangible results, the youth of Nepal now demand and expect practical outcomes in terms of jobs, income and opportunity for further prosperity.

In the past decade, identity politics dominated political discourse especially with regard to federalism. This discourse contributed to coming up with a more inclusive constitution with many progressive, affirmative actions in favor of historically marginalized groups. However, continuing exaggerated claims and demands in the name of identity are now becoming increasingly counter-productive, as they perpetuate political instability and economic stagnation that actually hurt the marginalized communities disproportionately.

Like young people all over the world, what motivates Nepali youth most is the potential to maximize prosperity for themselves and their children. As pragmatism for prosperity displaces the divisiveness of identity politics, I see Nepal turning a sharp corner in accelerating economic development and social progress.

I expect Nepal to reach a tipping point within the next decade when a new generation of Nepali youth exposed to the forces of globalization—because of the communications revolution, increased education, empowerment of women, and impact of massive labour migration—will take the reins of Nepal’s politics and governance.

Within a decade I see Nepal enacting constitutional amendments to ensure more stable governments with fewer political parties, as in all mature democracies. I see there being a public revolt against anti-development cartels and syndicates, and forcing political parties to dismantle them.

The generation that will lead Nepal in 2030 will be driven by pragmatism rather than ideologies of the bygone era that consumed their parents and grand-parents. Harnessing the country’s immense potential of hydropower, tourism, strategic geographic location, and its highly mobile and adaptable youthful population, I expect the 2030 generation to spearhead a rapid transformation of Nepal into the Himalayan Tiger of economic growth and social progress.

And once the Himalayan Tiger is unleashed, we can expect Nepal to become a dynamic hub of a resurgent South Asia, whose citizens will make their presence felt in the world’s most influential A-list institutions as prominent academics, creative artists, innovators and businessmen, philanthropists, sports stars and other professionals.

This write-up was adapted from an article that appeared in the 25th anniversary edition of Nefport, courtesy of the Nepal Economic Forum

Smoking more than 20 cigarettes a day can damage your vision, a study co-authored by a Rutgers researcher finds. ... Read More...

No big party shows vision in manifesto on education: Expert

KATHMANDU, Nov 10: None of the big parties have come up with agenda and policy in their election manifestos for... Read More...