A COVID Challenge for Nepal Army 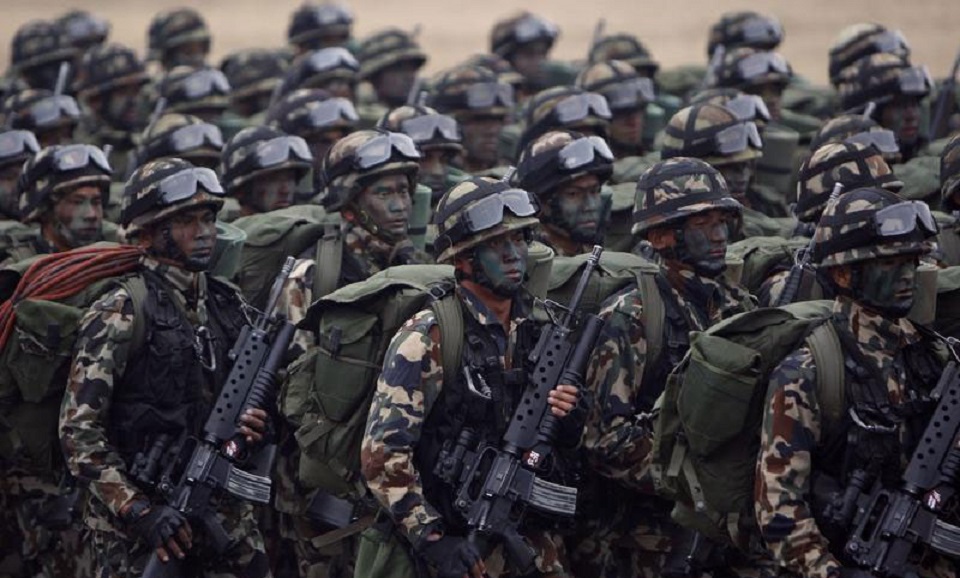 What is the point of having a large NA in this poor country in peace-time if not to fight the human insecurity of our citizens when a global pandemic has made millions of Nepalis vulnerable?

It breaks our hearts to see the plight of thousands of our Nepali compatriots stranded just across our southern border desperately trying to return to their motherland but prevented from doing so, not by any alien power but by their own government.

Yes, we live in extraordinary times of a horrendous pandemic. It is understandable for the government to ask its citizens to suffer some inconvenience and make personal sacrifices for the sake of the larger public good for compelling reasons for an unavoidable short period. But it is unconscionable and unconstitutional to deprive citizens of their right to return home for a prolonged and unspecified period as it is the case in Nepal at present.

It is ironic that while we take pride in facilitating the evacuation of many foreigners wanting to return to their homes from Nepal, the government prohibits the return of tens of thousands, and potentially up to a million plus, Nepali migrant workers abroad who have lost their jobs, whose visas have expired and who are surviving in precarious conditions as unwanted aliens.

There is no evidence of any proactive preparations being made to facilitate the earliest return of these vulnerable citizens. The government’s “wait and see” approach is both a violation of our citizens’ right to return home and a dereliction of duty by a democratically elected government. Faced with similar situation, most other countries—even poor, land-locked or sea-locked ones and many lacking good medical services—have devised ways to facilitate the return of their citizens abroad who wish to do so. One common approach has been to deploy their national security forces to assist.

The Nepal Army and Police did assist in setting up and managing the Kharipati quarantine center to look after a small number of Nepalis who were flown back from Wuhan, China. Apparently, they did a good job. They are also helping with other measures to combat COVID-19 as requested by the government. Some of these, such as helping build quarantine centers in various provinces and offering logistical support to civilian health services are very appropriate and welcome. But others, such as procurement of PPE and other materials from abroad bypassing normal procurement rules and channels, are disingenuous and inappropriate.

It is sad and inexcusable that while pleading lack of resources, the government has failed to mobilize our sizeable security forces of nearly 100,000 NA and 40,000Armed Police Force in a manner that is commensurate with the threat to our citizens’ human security.

The modern definition of national security or national defense encompasses the security of a nation state, including its citizens, economy, and institutions, going well beyond the traditional concept of protecting a state’s territorial integrity within fixed borders. In an era of globalization, when many “problems without passport or visa” such as environmental pollution, infectious diseases and pandemics, free flow of information, trade and commerce through the Internet travel across borders, human security becomes the corner-stone of national security.

Nepal has supported the concept of human security in numerous debates and decisions at the United Nations, including General Assembly resolution 66/290 that defines human security as an approach to identify and address widespread and cross-cutting challenges to the survival, livelihood and dignity of the people.

Many UN peace-keeping missions in which the NA, APF and Nepal Police participate with great distinction also focus on enhancing human security in some of the world’s most dangerous trouble spots. Why should not they do so in their own country when the lives and livelihoods of millions of fellow Nepalis are at risk?

Nepal Army already has a Disaster Management Directorate with close to 2,500 personnel who are trained as primary responders. It also has a Disaster Management School in Kathmandu capable of training many more. NA’s Medical Corps comprises over 1,200 personnel including several hundred doctors, nurses and auxiliary medical personnel. At a time of crisis like the current one there is no reason not to deploy them fully on a war footing.

After all, what is the point of having a large NA in this poor country in peace-time if not to fight the human insecurity of our citizens when a global pandemic has made millions of Nepalis vulnerable? We certainly do not need a large reserve of armed personnel in barracks as Nepal has no need or plan to wage territorial wars against external enemies, and our self-defence against any determined military aggression by our huge and powerful neighbors can only be skillful diplomacy rather than our military prowess.

Deploying the NA and APF in the fight against COVID-19 to secure our borders and strategic international entry and exit points around airports, is a perfect role in the intersection of national and human security. Protecting our compatriots who are stranded and vulnerable in foreign lands and securing their safe return home is also a duty of our diplomats reinforced by our national security services in times of extraordinary crises.

Specifically, in the context of the fight against COVID-19, I see the NA being deployed for the following tasks: As Nepal’s greatest vulnerability to COVID-19 is from infections being imported from abroad, particularly from across our open and porous border with India, largely due to Nepali migrant workers forced to return home, the highest priority should be given to ensure much tighter control and regulation of our border crossing points in close coordination with our neighboring countries.

Nepal’s civilian administration, with its cumbersome bureaucracy shackled by political patronage, is incapable of rapid action on a large scale. That is precisely where the NA has a comparative advantage. It should be deployed to build and manage large reception and quarantine centers inside Nepali territory in about a dozen key border crossing points from India to temporarily receive, test, counsel and if, necessary, quarantine people who are infected or highly vulnerable, before they are released to travel to their hometowns, or referred to other hospitals or treatment centers.

Similar arrangements should be made for the travel of Nepali citizens, especially migrant workers and students returning by air from abroad in the vicinity of Kathmandu’s international airport.

Nepal Army’s military and field hospitals in Kathmandu, Itahari and Nepalgunj should be utilized and, if feasible, expanded to test and provide emergency treatment for COVID-19 patients. Similarly, its fleet of field ambulances should be made available, and possibly further increased to ferry such patients.

As NA’s existing specialized staff and equipment may be inadequate to cope with the large influx of returnees to Nepal, it should be allowed and assisted to contract out additional temporary medical, paramedical and engineering staff to help.

One could even envisage securing some volunteers from the large number of medical doctors, nurses and security personnel currently working abroad, with the help of the Non-resident Nepalis Association (NRNA) and the retired NA and ex-Gurkha troops. Let us recall how hundreds of Nepalis in diaspora returned home and helped their families and communities in the aftermath of the devastating 2015 earthquake.

Besides these specific measures to help Nepali migrant workers and students from abroad, the NA’s support should be mobilized and greatly expanded, as it is already being done on a small scale, to support the efforts of the Ministry of Health in the areas of logistics, transportation and supply management in which military personnel are often better trained, skilled and disciplined. Long-term security sector reform

Beyond meeting the urgent need for responding to the current threat of the COVID-19 pandemic, this crisis can be a testing and training opportunity for the NA to greatly enhance its capabilities in disaster management which is already one of its recognized key functions. It is beyond the scope of this brief article, but as I have argued elsewhere, we need to greatly enhance the disaster management capability of NA in the broader context of long-term security sector reform.

During the decade of the Maoist insurgency (1996-20060), the size of NA doubled from 46,000 to 96,000. And Nepal’s defense budget quadrupled from less than NRs. 3 billion to more than NRs. 13 billion. In addition, a whole new Armed Police Force was established that swelled to over 30,000 with concomitant budget increases.

Recognizing that we did not need to retain such a bloated security apparatus in peace-time, the Comprehensive Peace Accord (CPA) and the Interim Constitution of Nepal called for “determination of the appropriate size of the Nepali Army”, including making its structure and composition more inclusive and representative of the diversity of Nepal’s population.

Although some modest efforts were made to implement these commitments, the size of NA and APF have not been reduced, and their budget has continued to grow. While there is no political appetite for right-sizing the NA and APF, the agenda for restructuring them to meet the real national and human security needs of the country still remains valid.

During the peace process I recall proposing that in the changing context of Nepal’s real security needs, it would be desirable to restructure the NA to undertake four major tasks:

1) The traditional military functions of defending and safeguarding the nation’s sovereignty and
territorial integrity, and helping maintain peace and security,

3) much stronger role in disaster management and humanitarian crisis response, and

The NA is already involved in such activities to some extent. What is being proposed is to make this more formal and systematic, including reallocation of the defense budget and human resources to reflect these priorities.

I believe Nepal can and should aspire to become the world’s number one peace-keeping troop contributor, and develop the NA’s capacity on disaster management into a world-class institution capable of responding not just nationally but internationally as well.

Let us turn the curse of the COVID-19 crisis into a blessing in disguise as one more opportunity to transform Nepal Army into a world-class institution to strengthen our national and human security and contribute to global peace and security.

Nepal Army launches probe against 27 over irregularities in recruitment process

KATHMANDU, Oct 23: The Directorate of Public Relations and Information (DPRI) of the Nepal Army has launched an investigation against... Read More...

KATHMANDU, May 15: The main opposition Nepali Congress has strongly opposed the bill tabled by the government at the Parliament... Read More...

NA set up camp at Lomanthang

MUSTANG, Nov 5: The Nepal Army (NA) has set up a camp at Lomanthang of upper Mustang. The army camp was... Read More...