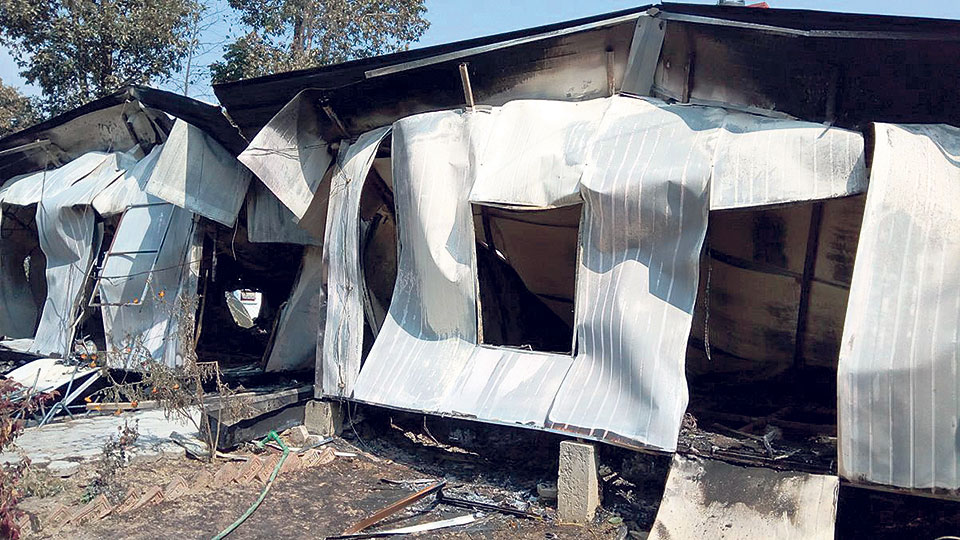 The prefab cabins of World Vision International with their warped metal claddings after the fire.

Preliminary investigation shows that the fire caused damages to property worth around Rs 7 million, according to Dinesh Baral, the district manager of the organization.

He informed that the fire spread in two prefab cabins of the organization. “All the furniture, few sets of laptops and essential documents was gutted by the fire,” added Baral.

The fire was brought under control two hours later through joint efforts of the Nepal Army, Nepal Police and locals. A fire engine from Chautara was also used to fight the fire.

“By the time the fire was doused, everything was destroyed,” Baral informed. The cause of the fire has not been established yet. However, short circuit has been suspected as one of the probable causes.

Among many activities, the non-government organization is involved in several post-earthquake recovery efforts within the country after the catastrophic 2015 earthquakes.

ILAM, March 12: Property worth around Rs 1.5 million was gutted by fire at Ilam municipality-1 this morning. ... Read More...

TAPLEJUNG, Oct 10: Three houses at Sagadin Market at Kehwang VDC in Taplegunj district were reduced to ashes in a... Read More...