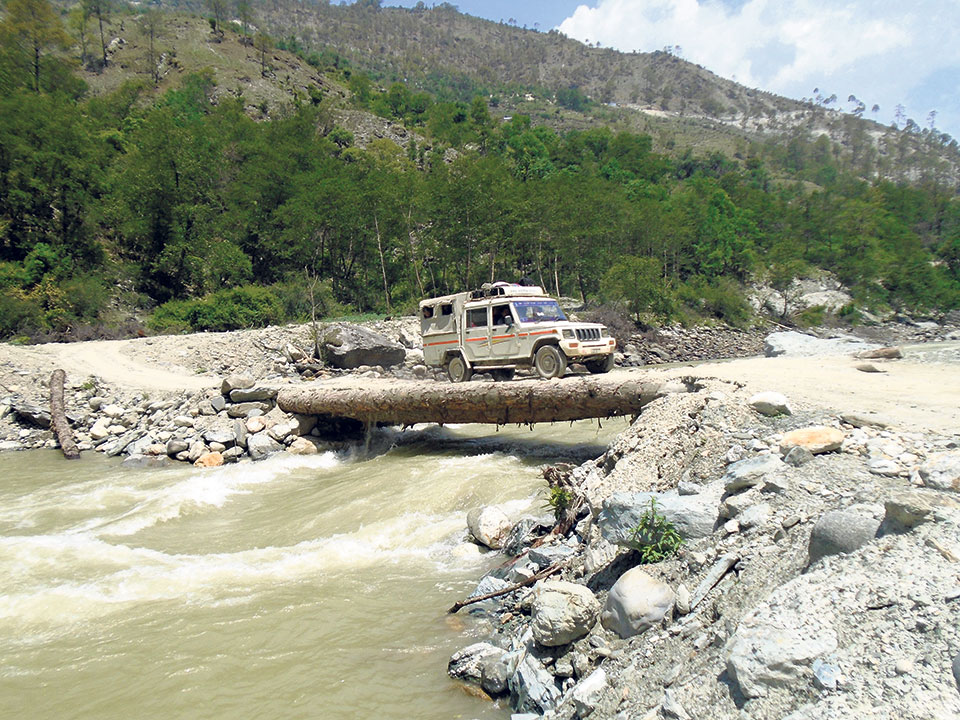 A makeshift motorable bridge made of tree trunks built by the villagers over the Seti River at Dhaulabagar of the six-kilometer road section pictured on Thursday.

BAJHANG, June 1: Locals of Talkot Rural Municipality-5 in Bajhang district have constructed a six kilometer long road in their village by selling ornaments and keeping their land as collateral to raise the required fund.

Residents of Khaila, Bhetkala, Bhandari Gaun and Kota of Khaila Talkot Rural Municipality-5 united for the purpose. The men in the villages sold their wives’ gold jewelry and took loans to build the road from Ruwatol to Khaila.

These villages have long been ignored by the government authorities even after the federal government came into being. At the end, villagers had to take maters in their own hand by raising funds by themselves.

Amar Joshi, one of the locals, said he contributed by selling two tolas of gold belonging to his wife. “From salts to other foods, we have to purchase it from the markets and carry it on our backs to transport it to our house. As the government did not care to alleviate our difficulties, we constructed the road ourselves,” he said.

During the last local elections, political parties had asked for votes making various promises, including ‘Gau gau ma Singha Durbar’ (Singha Durbar in every village). So far, the villagers are disappointed stating that all the promises remain unfulfilled even months after the elections.

“We heard lots of promises during the elections. Many politicians came to us. But in reality, all of them cared only about themselves and none of them cared about solving our problems,” said Ram Bhandari, another local.

The villagers spent Rs 7.2 million to construct the road. Apart from their own savings, they collected Rs 2 million from donation while Rs 1.8 million was provided as aid by former Dhamena and Talkot village development committees a year ago.

RAMPUR (PALPA), May 9: The locals in eastern Palpa are forced to scour for drinking water, the basic essential need... Read More...

Women keep their ornaments as collateral to help build road

MYAGDI, Dec 17: Fed up of the local authority's cavalier attitude towards the expansion of a road at Bhakimli-5 in... Read More...

Villagers forced to migrate for lack of drinking water

PALPA, Feb 16: Villagers of Balepandhera, Bahundanda and Kamitole of Rampur municipality-10 have begun migrating due to severe crisis of... Read More...