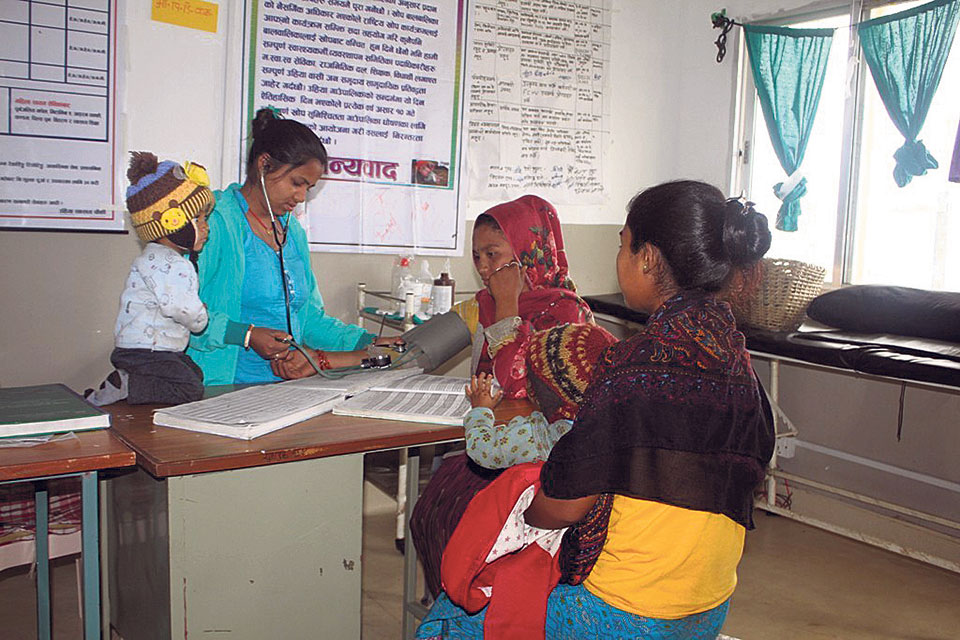 GORKHA, June 9: Uhiya village of Gorkha is unique. Here, people take medicines from doctors but hardly take it without getting it treated by shamans. Preferring shaman's directions to that of doctors is a rule of thumb here. Everyone is comfortable about it here around, reports a local Janga Bahadur Gurung.

"There are no Jhakris (Shamans) in the community of BK (Bishowkarma) but in our Gurung tole, there are many Jhakris. And those Jhakris are our doctors. Even medicines received from health post is taken to Jhakris and is consumed only after they pronounce mantras on it," he said.

Shubha Narayan Das, health assistant at Uhiya Health Post is not surprised. He has seen it since he was posted here. "They have deep faith in shamans. But doubt doctors or medicines. They don't take medicines unless shamans gives green signal," he narrated.

The village is three days away (now with a new road track till Machhekhola, which was constructed by Nepal Army, it is two-day journey) from the district headquarters. Communication and transportation service are rare here. One can talk through CDMA service but villagers have to walk at least half an hour uphill for this.

"In the BK community, they get drunk often all the time. They are considered lower caste as well, so we don't get shamans from their community. But in Gurung community, you will get so many shamans, they are the ones who take care of people's health," Gurung narrated.

Suman Gurung, who works as technician in northern part of Gorkha nodded in affirmation. According to him, it is due to the lack of awareness, people in Gorkha villages still largely depend in shamans. Uhiya village 'respects' shamans, he said.

"It is a kind culture here. They have high regards for shamans," noted Suman. "In Uhiya village, shamans are quite popular. You will get shamans in almost all Gurung houses, they are approached when children, men, or women fall sick," he added.

Locals report that around 80 percent of houses in Uhiya depend on shamans. Both due to the lack of proper health facilities as well as deep-rooted faith in the shamans, they have continued the dependency, he said.

"The government has not been able to bring impressive health policies. Health facilities are not available in villages. There are few health posts in the village, but they do not quite attract people," Suman stated. "That's why people continue to have strong bonding with shamans. They are there, available any time," he added.

Seeking services from shamans is not a low cost affair. All the stuffs demanded by shamans for puja have to be purchased. Liquor and cock, among other things, are to be offered without question. There are only few shamans, who provide services without a cock and liquor. On top of the puja materials, dakshina (cash) is also expected by shamans. Interestingly, shamans, after they 'do their part of job', send patients to health post. If patients go to health post without consulting them first, 'that does not work', shamans say. None questions the shamans' predictions.

"They have certain style. Once they come in form, they tremble like anything. Then they smoke, and drink. They go intense, furious and 'diagnose' the patient. Then they announce the disease and after that, as per the need, patients are sent to health post, hospital," Suman elaborated.

Many a times, he has found shamans themselves visiting health posts. But even that is not questioned by people. "They hardly doubt the power of shamans. The fear of being troubled in future keeps them nervous and faithful," Suman said.

Worse thing is, shamans take time in referring patients to doctors. They keep the matter to them unless it becomes severe. "Till it looks normal, shamans keep control of the patient. Only after it seems to go out of their hand, they tell patients to go to doctor. By that time, it becomes quite late sometimes," Suman said.

"In such urgent situations, people are forced to take away patients to headquarters or Kathmandu by chartering helicopters," he added.

Though they show strong faith in shamans and do not hesitate to state that shamans are their refuge', locals indicate that better health services could change the scenario. According to Gurung, services in health posts are not reliable. Presence of health workers and doctors is even rare in remote areas. The lack of effective health care in villages has let the shamans remain influential Suman said.

RUKUM, Feb 1: There is a small village named Aala in Sisne Rural Municipality ward no 6 of Rukumkot, which consists... Read More...

Patients cared for by women were less likely to die or return to the hospital after discharge ... Read More...

Nagma-Gamadhi road to be upgraded
14 minutes ago