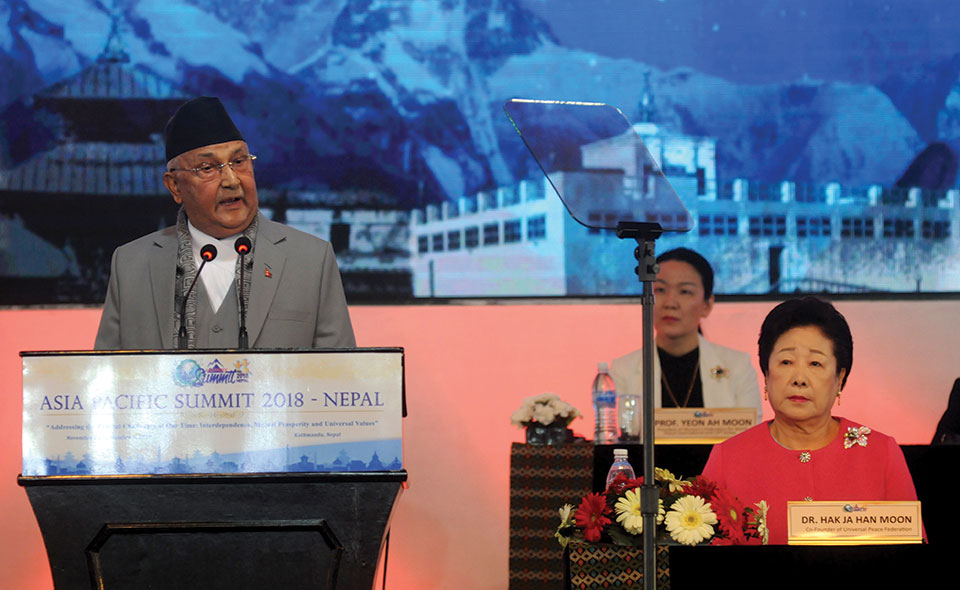 The recently concluded Asia Pacific Summit 2018 with the theme “Addressing Critical challenges of our Time: Interdependence, Mutual Prosperity and Universal Values” organized mainly by Unification Church of South Korea was mired in controversies due to obvious reasons. Universal Peace Federation (UPF) was one of its co-organizers.

Universal Peace Federation which is the wing of Unification Church of South Korea is founded by late Rev Sun Myung Moon who was born in 1920 in North Korea. He founded an array of religious academic, educational, arts and peace organizations working in more than 190 nations—dedicated to the belief that world peace must begin with harmonious families.

Ironically, Moon who was reported to have had dedicated his life for harmonious families, divorced his first wife and married Hak Ja Han in 1960 who was half of his age at the time of marrying her. After marrying Hak Ja Han he kept her under virtual house arrest with determination to make his bride pay for Eve’s original sin.

His Unification Church grafted Christianity with Confucianism and anti-communism. In 1935 while praying near Mount Myodu, Moon said that Jesus appeared to him on Easter Morning commissioning him to take on a special mission on Earth having to do with Heaven’s work. He even preached that on several occasions he was guided directly by Abraham, Moses, Jesus, Mohammed, Buddha and other Saints and Sages of all faiths, who met him in spirit and contributed to his understanding of God. Finally, he prophesied himself as the second incarnation of Jesus creating confusions among fellow Christians.

Even his wife Hak Ja Han is reported to have declared herself only daughter of Jesus and mother of all during her inauguration speech in Asia Pacific Summit in Kathmandu.

As a person born and raised in Protestant Christian family I can say that teachings of Moon families are unbiblical and heresy. Nowhere in the Bible is written that Hak Ja Han is only daughter of Jesus and Moon is second incarnation of Jesus. The first chapter of John the gospel says “But as many as received Him (Jesus), to them He gave the right to become children of God.”  As majority of Nepali churches don’t buy this unholy and self exalting teachings of late father Moon, I was rightly infuriated by the news unnecessarily dragging Nepali churches into the peace summit. Most Christian organizations even released press statements distancing themselves from unholy nexus of politicians and contractors of religions who organized Asia Pacific Summit.

Therefore Nepali Churches had nothing to do with the summit. Chairman of Universal Peace Federation, Nepal chapter, Ek Nath Dhakal, who chiefly organized this summit, is practicing Hindu but many regard him as Christian which he vehemently denies. Even within a Nepali Christian circle many mistakenly regarded him as a devout follower of Jesus and voted his Nepal Family Party in the first Constituent Assembly electing him as a lawmaker through proportional system. Many Nepali Christian leaders have been hurt by his double standard. Therefore, the government decision to support and collaborate with controversial organization in organizing this summit deeply dismayed us.

Using state coffers and machineries for the flagrant promotion of a particular religious organization is against the spirit of secularism enshrined in our constitution. The government decision to invite Chief Minister of Indian State of Utter Pradesh,Yogi Adityanath, as chief guest at Bibaha Panchami ceremony is also wrong. Yogi Adityanath who is actively advocating for Hindu Kingdom in Nepal is divisive political figure even in India. Inviting him as a chief guest goes against the ethos and spirit of constitution.

It was disheartening to see government elected by popular votes bowing down before a foreign lady who falsely regards herself as only daughter of Jesus while treating Nepali Christians with suspicions. Nepali Christians are often accused of proselytizing.

Even though the constitution has declared Nepal as a secular republic, the state is bringing laws to curb the rights of Christian minorities. On August 8, the Parliament passed a new criminal code that incorporates constitutional restrictions on the right to freedom of religion or belief. Criminal code criminalizes “hurting of religious sentiments” and prohibits religious conversion. The “offence” could result in five years in custody and a fine up to Rs 50, 000.

Therefore the government should repeal or amend its constitutional and legal provisions on religious conversions to bring them into compliance with international religious freedom standard.

Let me hope the government will correct these mistakes in coming days and will embrace the spirit of secularism enshrined in our constitution.

BHADRAPUR, Sept 19 : Leaders of the Limbuwan movement who are not happy with the new constitution, asserted that their... Read More...