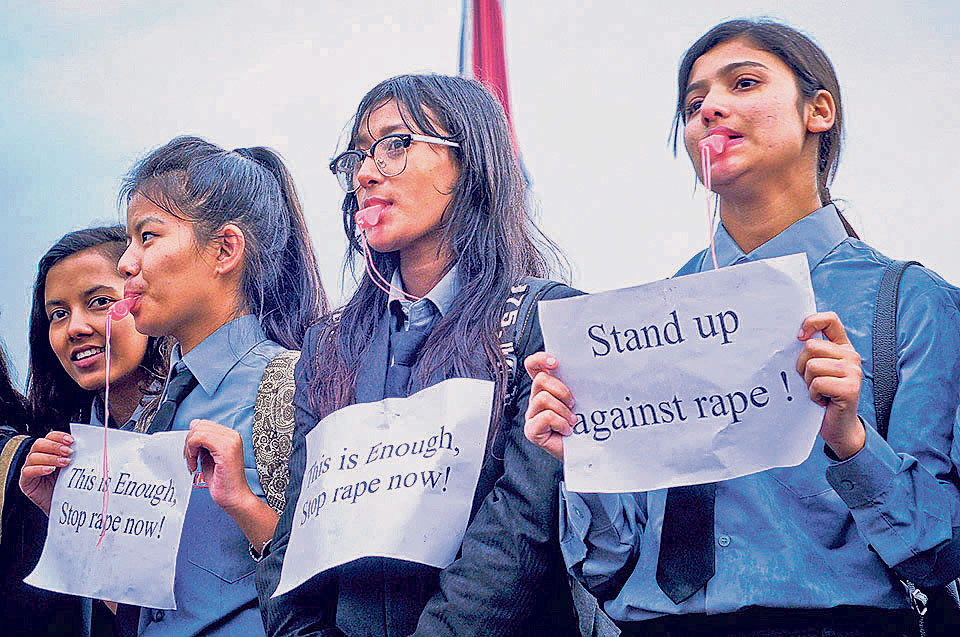 A thirteen year old girl was brutally murdered after rape in Nimbukheda of Bhimdutta Municipality in Kanchanpur district in July. This has sparked tension in Mahendranagar as local people are mounting pressure on the local government to take action against the perpetrators. For the victim’s family, it was indeed a nightmare to witness the cold blood death of their beloved daughter after rape. Instead of devoting their time and resources to nab the criminals of reported inhumane crime, local administration tried to suppress people’s genuine protests and reportedly pressured the victim family to cremate the dead body of the girl.

What happened in Kanchanpur is only a tip of the iceberg. In recent days, the cases of violence against women and girls are reported daily in the national media. Recently some girls were rescued from the clutches of traffickers in New Delhi, India with the help of Indian administration. Some months ago a local woman in Kailali was severely beaten with the false accusation of witchcraft.

It was more disgusting to have the mayor of the municipality found to be supporting perpetrators instead of throwing them in jail for their inhumane treatment. There was a case against serving deputy superintendent of police (DSP) in recent months by his own wife that he had repeatedly abused her both physically and emotionally.

We have already seen a cabinet minister in the government resigning after public outcry against his unfounded and disparaging remarks against female medical students studying in Bangladesh. After his remarks many girl students studying medicine in Bangladesh and their parents expressed vehement wrath against the law minister. And he was forced to tender the resignation.

According to the recent statistics available for the year 2007/8 there were 317 cases of rape reported to the police whereas 70 cases had been filed for attempted rape. There were 1100 cases of domestic violence against women throughout the country reported to police during the same period. In 2016/17, violence against women has sharply increased. As many as 1139 cases of rape were reported, whereas 531 cases of attempt rape were filed. It is disheartening to see our sisters and daughters being harassed and sexually exploited by their own relatives and those who are meant to protect them.

The United Nations defines violence against women as “any act of gender based violence that results in, or is likely to result in, physical , sexual or psychological harm or suffering to women , including threats of such acts , coercion or arbitrary deprivation of liberty whether occurring in public or in private life.”

According to the UN report, one in three women and girls experiences violence in their lifetime. Globally women and girls are being abused every hour. We see twitter and Facebook feeds being flooded with the allegations of sexual conducts after the emergence of #metoo movement.

Hollywood is currently advocating the “times up” movement against gender-based violence in the entertainment sector. Worst case of violence against women in the modern world was reported some years ago in Amstetten, Austria when 73 years old father was found captivating her own daughter for 24 years in a windowless cell raping her and gathering her seven children. In India though rape perpetrators are given death sentences, cases of sexual harassment have been found to be on the rise in the recent years. Therefore violence against women (VAW) is not only confined within our country. It has become a global epidemic.

Today violence against women exists in many forms. Women are emotionally tortured as they are made to feel weak and unsafe before men. They are even restricted to express their feelings and share their pains. Their desires and frustrations remain suppressed. Consequently most women have suffered from mental depression.

As this is happening, our society, guided by the male chauvinism, hardly listens to their sufferings. Even religions tend to treat women unjustly depicting them as being impure and subordinate to men and cause of evil.

Women constitute more than half of the country’s population and yet literacy rate of women stands at 65.9 percent. In the recent times, there has been tremendous progress in women empowerment in the country. Women occupy the seats from the president to deputy mayors of numerous municipalities. Even the constitution stipulates that 33 percent of the seats in the parliament should be reserved for women. Thus our laws are largely women-friendly.

Yet, many in Nepal tend to think that our social structure will breakdown if women are empowered politically and infidelity will increase if they are bestowed more rights. Some even think that empowering women will create disharmony in the society and the family.

Orthodox thinking like this is fuelling cases of violence against women. This is the reason why despite reasonable representation of women in politics and despite having women-friendly laws, Nepali women are falling prey to domestic violence, including rape.

Thus we need to educate our children from the young age that women and girls are to be respected and treated equally. Let us introduce such subjects in the school curriculum itself. The new generation should be given civic education as to how they should behave with girls and women.

Let’s bring in remittance as much as we can through skills but not at the cost of our emotional wellbeing Read More...