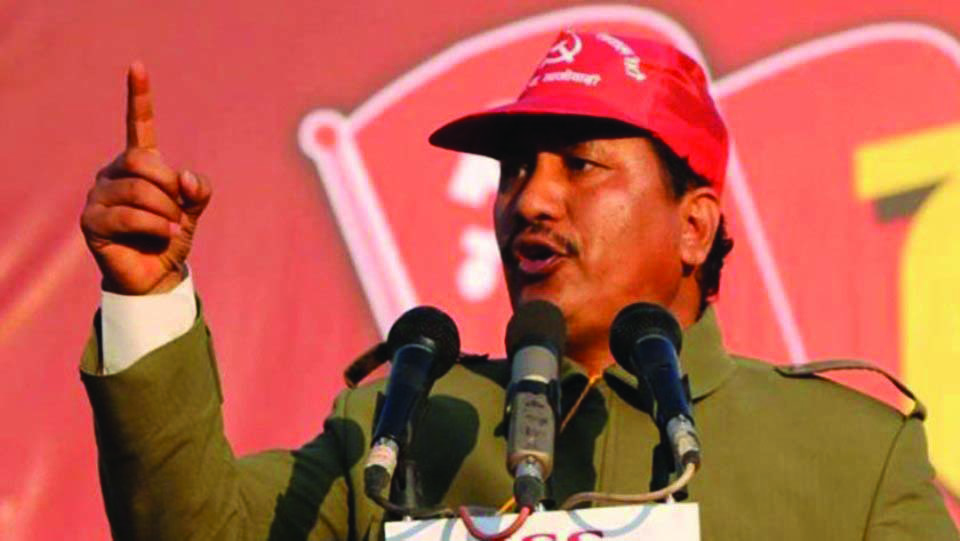 When the government can mainstream the secessionist outfit, why cannot it address Biplab’s concerns through talks? Why cannot it bring Biplab to peaceful politics?

When the decade-long Maoist insurgency, which resulted in deaths of over 17,000 people and destruction of vital infrastructures, came to an end along with the signing of Comprehensive Peace Accord (CPA) in 2006, there was a hope that the country was firmly set on the path of, peace, development and prosperity. But what followed was the era of long transition coupled with political instability. Deadly 2015 earthquakes woke leaders up from deep slumber. Then, they fast-tracked the constitution writing process, sidelining genuine grievances of various communities. Netra Bikram Chand ‘Biplab’ is trying to cash in on people’s resentment at the moment.

Today, Biplap group stands as a major security threat to Nepal. On May 25, prior to nationwide strike, his cadres launched series of explosions inside Kathmandu Valley. When Home Minister Ram Bahadur Thapa said there were no civilian casualties but cadres of Biplab died in the explosions, it triggered public outrage against him. Even during the 2017 elections held under the new constitution Biplab’s outfit had detonated over a hundred improvised explosives targeting rallies of influential leaders. Recent arson on Ncell towers has proved criminal mentality of Biplab’s group.

Biplab’s group has been launching violent activities with the goal of “completing the revolution” that it says was abandoned when the Maoists led by Pushpa Kamal Dahal joined the peace process in 2006. Home Minister Ram Bahadur Thapa is accused of branding the Maoists offshoot by security experts when he disclosed that Chand-led Maoists have established four companies of the fighters. Out of 19,000 Maoist combatants verified by the United Nations Missions in Nepal (UNMIN) only about 6,500 were integrated into Nepal Army. The rest took voluntary retirement or simply disappeared. Even during the verification process, some weapons were found missing. Recently captured weapons from Biplab’s cadres, which were subsequently investigated by the security forces, show that Biplab is using the same weapons the Maoist fighters used during the insurgency. This means the group of Maoists led by Biplab did not return all the weapons during the army integration process. Biplab had expressed displeasure over integration of Maoist combatants into Nepal Army then and called it a Maoist “surrender.”

It shows that before joining the peace process Biplab had well prepared and thought about waging a war against the state. As the transition prolonged after peace process due to infighting among political parties, it created a breeding ground for Biplab’s forces to flourish. It is said that his group enjoys the support of many within Nepal’s disadvantaged, marginalized communities frustrated by casteism, corruption and underdevelopment.

Recent killing of Sarlahi district in-charge, Kumar Paudel, in extrajudicial encounter has further infuriated the group and it is unleashing terror and violence in the country. In the meeting of state affairs and good governance committee of the federal parliament home minister was drawing criticism from his own comrades due to his unbelievable reports on recent killing of Paudel. After the killing of Paudel in police encounter human rights activists have called for fair investigation into the case. When law enforcement officials kill a person after taking him/her under control, it amounts to crime.

The government seems to be responding to Biplab’s violence with violence, which is not right. This is why people are questioning the government’s intention. The government of K P Sharma Oli further infuriated Biplab’s group when, on March 12, it officially declared it a criminal group and banned all its activities. Some legal experts argue that banning a political party is unconstitutional and it only makes the banned organizations more popular. Most leaders, who emerged as the country’s prime ministers, were once the members of similar banned outfits. Thus top leaders, including the prime minister himself, should have learned a lesson from their own experience. After then government banned Maoist party led by Pushpa Kamal Dahal and Baburam Bhattarai and termed it a terrorist organization, it led to the bloodshed in the country. When King Gyanendra sidelined the mainstream political parties, it sowed the seed of People’s Movement.

Since the government declared Biplab’s outfit a criminal group, it has arrested over 640 leaders and cadres of the outfit. Biplab seems to be taking revenge against the government for the same. Biplab is the offshoot of Maoist party. Thus his group should be treated as a political outfit and the government should reach out to it for dialogue. When the government can mainstream the secessionist outfit, why cannot it address Biplap’s concerns through talks? Why cannot it bring Biplab’s group to peaceful politics? Biplab’s group is unleashing violence and committing atrocities. People are worried that the country might be headed toward another conflict. Therefore, without further delay the government should call Biplab for talks and find peaceful solutions to the concerns he is raining.

Govt itself has obstructed construction of Gautam Buddha International Airport: Poudel
21 hours ago