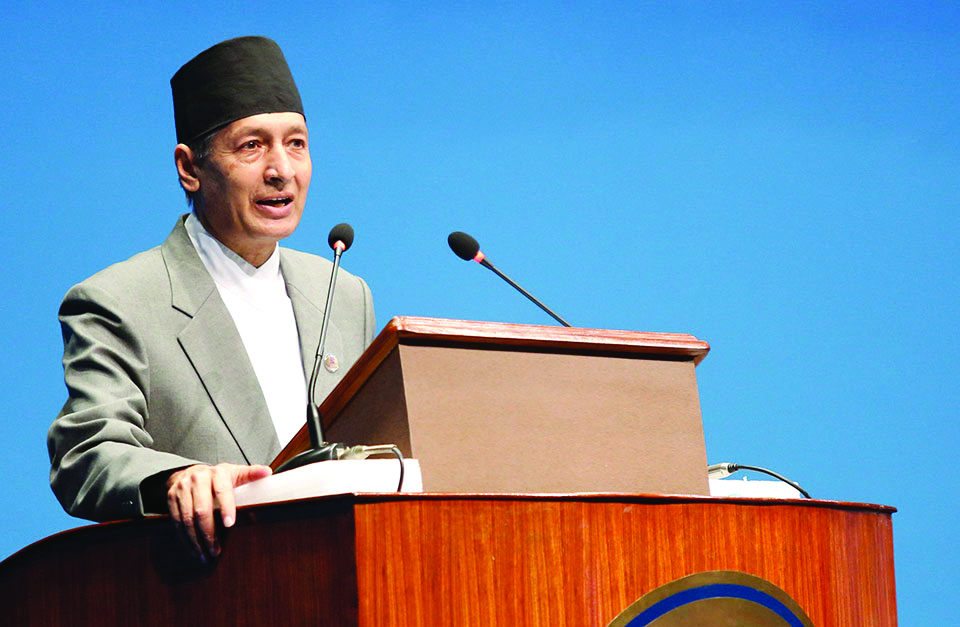 How will Nepal achieve 8.5 percent growth? Likely sources of growth do not point to more than a mediocre performance, around four to five percent

You must have heard of comedians on stage getting the rabbit out of a hat and less often out of pocket. However, with respect to political miracles in Nepal, we can envisage a scenario of economic growth coming out of politicians’ pockets, which is the case of Finance Minister Yuvraj Khatiwada recently making an upgrade of Budget’s GDP growth forecast for the fiscal year 2019/20 to a solid 8.5 percent rate, higher than the earlier forecast of 7.5 percent.

However, no explanation is given for this upsurge in growth—which is the annual percentage rate of increase in the inflation-adjusted value of goods and services produced in any given year. We can simply assume that Finance Minister saying such things without explanation and justification is like oozing out economic growth from his pocket or by performing magic.

But, simply, we do not believe in magic, especially when it comes to science like economics which doesn’t leave out much to imagination or wishful thinking. Any finding or judgment about the economy’s performance must be backed up by hard facts, which generally means from empirical tests of theoretical principles. However, in the current environment of the level of scholarship at the Ministry of Finance, it is highly unlikely that its pronouncements are based on serious studies of economics, of growth economics in particular.

In its simplified version, economic growth signals the movement of the economy from one point to another—from low to a higher level. Defining economic growth as increase in the values of goods and services produced in an economy over a period of one year, the projected growth of 8.5 percent or any other number means that the volume of goods and services from year 1 to year 2 will be enlarged by 8.5 percent—which the Finance Minister designates as close to two-digit—meaning double-digit growth.

So what makes the economy increase its size, from one year to the next? This is a simple question but the answer is not that simple. Economic growth requires growth in factor inputs and use of technology that helps input factors—primarily labor—to become more productive. If we calculate economic growth as output per worker, then economic growth in per capita terms narrows down to the increase in the productivity of the workforce or, simply, growth in productivity.

At this point, the simplicity of the concept of economic growth vanishes and complexity creeps in because it requires explaining how productivity grows which, in short, is labor productivity.

Again, for simplicity, we can attribute growth to sources—such as physical capital, human resource, natural resource and technology to name a few—which help labor become more productive. All these inputs combined—in some proportion—help labor perform its work better than just using raw labor, which we call unskilled labor. Education is the primary means of making a worker more skilled, while the use of more equipment, a larger volume of natural resource and improved technology all combined make labor produce more from a given amount of resource.

How these sources of productivity actually grow over time and how they get combined to yield per capita income growth differs quite substantially from country to country, depending on the environment that surrounds their use, such as the country’s politics, rules and regulations and its justice system—the so-called noneconomic factors that also affect growth, at times quite substantially.

How is 8.5 percent growth going to be achieved? There is no explanation given for this upsurge in growth but we can go through growth determinants to getting an idea of how much the economy can grow on an annual basis and where this growth comes from.

First, we need to factor in the labor supply. In an underdeveloped country like Nepal, annual increase at 2-3 percent rate is expected which, however, is unlikely for Nepal for the reason of a significant outflow of workers for overseas employment, nearly one hundred thousand workers per year.

Such an outflow is a significant loss of workers for local employment, probably equal to new entrants in the labor force. This would mean almost no increase in labor supply to the domestic economy implying that all of 8.5 percent growth in GDP during 2019/20 will have to come from growth in other factors contributing to growth—capital stock, natural resources, technology upgrade and managerial innovations. However, it is hard to justify a bourgeoning growth taking place in any of these factors that could be fueling this level of growth in Nepali economy.

Take the capital. How much capital is needed to produce the 8.5 percent growth rate, given that nothing else changes? There is a wide variation in capital-output relationship across countries but, on an average, 5 to 1 ratio tends to hold, meaning that each five percentage point increase in capital stock in terms of GDP would help GDP to grow by one percent. For 2019/20, gross fixed investment is projected at upward of 35 percent of GDP, a surprisingly high number for a country like Nepal with the historically low-growth economy.

Most likely, the projected investment rate of 37.5 underlies the high GDP growth projected for the current year but this assumes that investment target is realized and that capital is used in productive ventures, and, most importantly, there is no leakage of investment funding to other uses, such as kickbacks and corruption, which, as past evidence suggests, has played large role in the low effectiveness of capital use in Nepal.

Another point is 37.5 percent rate is a gross figure that includes wear and tear of capital items and obsolescence, all of them large consumers of capital assets, mostly for the reason of the low quality of new investment (roads, bridges, irrigation canals, electric grids and water and sanitation infrastructure) and leakage through corruption. Also, there is usually a shortfall in implementation, because of financing difficulties, a shortage of input supplies and contractual disputes.  Overall, we can expect that as much as half of capital invested each year gets used for new capital stock. Net investment then is likely to be 20 percent or less, compared with the projected gross rate of 37.5 percent. This level of investment is unlikely to get us higher than four percent growth.

Additionally, there are reasons to believe that the expectation of high investment growth is based on flimsy ground. As it stands, much of the projected investment is expected to take place in the private sector on which practically no data exist, Similarly, the private savings rate is assumed at an upward of 40 percent which is not believable in a country with a large subsistence sector where saving is practically nil. It may be that workers’ remittances are treated as saving which, however, is wrong for the reason that most of remittance receipts finance consumption, with a large part of it going out in imports.

Looking at other growth factors—upgrade of technology and improved management practices—they can hardly be expected to be the leading factors of growth for Nepali economy. Looking at unchanged technology being used in agriculture, manufacturing, construction, and transport sectors, they can’t be large contributors to growth.

Because the likely sources of growth do not point to more than a mediocre performance for the economy, which more likely will grow 4 to 5 percent in 2019/20, about half the rate the Finance Minister says the economy will grow. In most parts, growth fundamentals are lacking which, however, isn’t a new story for Nepal but a historical record. We can look at the long-term data of the past 50 years period that show the country’s per capita income now stands at about $800, compared to about $100 in the late 1960s. The average price level in dollar term shows a similar increase based on US consumer price data. This makes almost a complete offset of the increase in nominal per capita income, suggesting an unchanged level of real income and unyielding poverty over several generations.

We can also look elsewhere for evidence of exaggerated claims of economic growth and ensuring prosperity. One such case is a recent study by Arvin Subramanian, Professor at Harvard and former Chief Economist at IMF, of India’s national accounts data. Making use of a new methodology, Professor Subramanian’s study of India’s National Accounts yields an average of four percent annual growth from 2011 to 2017, about half of what the official data show.

NC-proposed candidate must be made new President: Sharma
1 minute ago

Why was the University Bill introduced, leaving aside the Education Bill?
21 minutes ago