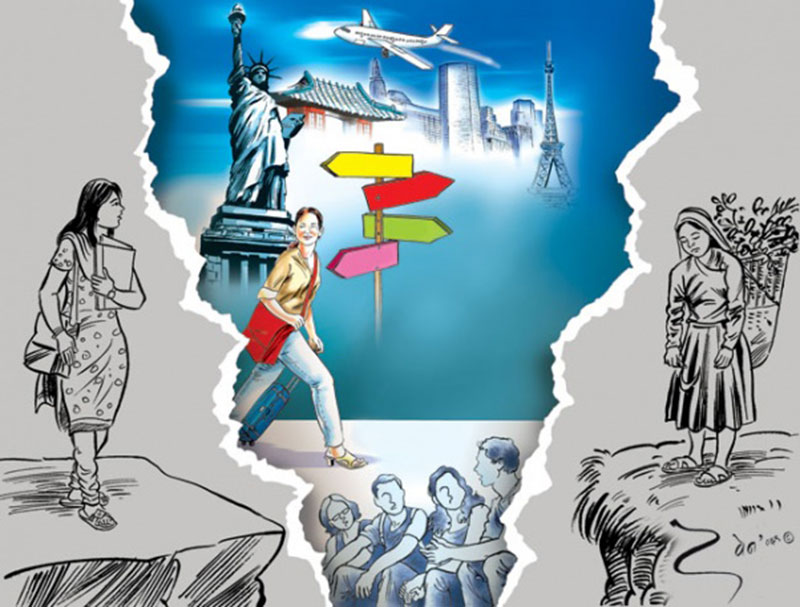 Around 70 percent Nepalis are engaged in agriculture. But since most of it is primitive, youths are not attracted
Last week I was invited to facilitate a talk-session on unemployment and skill development that was being organized by an NGO. In course of my research for the talk, I was stunned to learn of the high rate of unemployment in Nepal. Currently, around 450,000 people join the labor market annually. The government has failed to create opportunities for most of them. A study of the International Labor Organization (ILO) on Nepali youths between 15 and 29 says 26.1 percent of university graduates are unemployed. As there is slim chance of being employed in Nepal, more and more youths, even the educated ones, are looking to go abroad. According to the Foreign Employment Promotion Board, every day, 1,800 youths leave Nepal for employment abroad.

Article 33(1) of recently promulgated constitution says “Every citizen shall have the right to employment. The terms and conditions of employment, and unemployment benefit shall be as provided for in the federal law.” Simply enshrining the right to employment as a fundamental right won’t solve Nepal’s unemployment problem, unless the government is also serious about creating new jobs. Nepal’s top priority right now should be providing gainful job opportunities to its unemployed youths rather than distributing unemployment allowances. In my view enshrining unrealistic and expensive promises like unemployment allowance makes the constitution shallow. Even though unemployment has been Nepal’s underling cause of poverty and backwardness, there has been no serious discussion on the issue. This has happened as our political parties have in recent times been completely occupied with political agendas.

Political instability is one of the many reasons why Nepal, abundantly rich in natural resources, is still a poor country with such a high unemployment rate. No government formed after 1990 has been able to serve its full five-year tenure. To create job opportunities in the country we need foreign investment. But the government has failed to create investment-friendly environment, not the least due to the rampant nepotism.

According to the ILO, only 10 percent of vacancies in Nepal are filled through advertisement, while the rest are taken up by acquaintances and relatives of the rich and the powerful.

Around 70 percent Nepalis are engaged in agriculture. But since most of it is primitive, youths are not attracted to it. If the government provides subsidies to farmers (in keeping with its annual budget) and brings youth-friendly agriculture policies, it could probably stop the large number of youths looking to head out of the country at the first available opportunity. Another reason for high unemployment is lack of industries. Strikes, long hours of power-cut, widespread extortion and militant trade unions have decimated manufacturing.

Industries at the receiving end of the deadly earthquake were further affected by the India-imposed blockade. Without industrialization it’s impossible to address unemployment. Nepal’s theory-oriented education system has been successful only in producing educated but unemployed youths, those singularly unfit for today’s competitive job market.

In his highly acclaimed book Fatalism and Development: Nepal’s struggle for modernization Dor Bahadur Bista, one of the Nepal’s pioneering anthropologists, writes that a major obstacle to Nepal’s modernization is the Hindu notion of Karma: the belief that one’s fate is written on one’s forehead at birth and nothing can be done to alter it. As people believe in fortune rather than hard work, they blame their wretched fate whenever the going gets tough.

Another reason people shun work is the caste system, writes Bista. Caste system has created a highly segregated society. Those at the top hierarchy of caste system abstain from physical work and depend on charity of others. “As a career objective in modern Nepal, every Nepali tries to have a Jagir, a salaried job, where one doesn’t have to work but will receive a pay check at the end of each month,” Bista writes. Unless we as a society emerge from this narrow mentality, we will never be able to value work or to create enough opportunities to employ all our youths.

Of course, the government has to play a lead role in employment-generation. But we as individuals also need to emerge from our caste-inscribed mindset. It’s unfortunate that those who have skills in traditional works are treated as untouchables. We thus don’t honor labor. If we were ready to do any work that is available, half of Nepal’s unemployment problems would be solved.

LONDON – At 3.6 percent, unemployment in the United States remains near its lowest level since the late 1960s. There... Read More...

Yes, you can call me an optimist. My wife worries more about how she might fail rather than just doing... Read More...

“What did some of my brothers win yesterday?” asks PM Oli
17 hours ago

Either prove your majority in the parliament or step down, Deuba tells PM Oli
16 hours ago