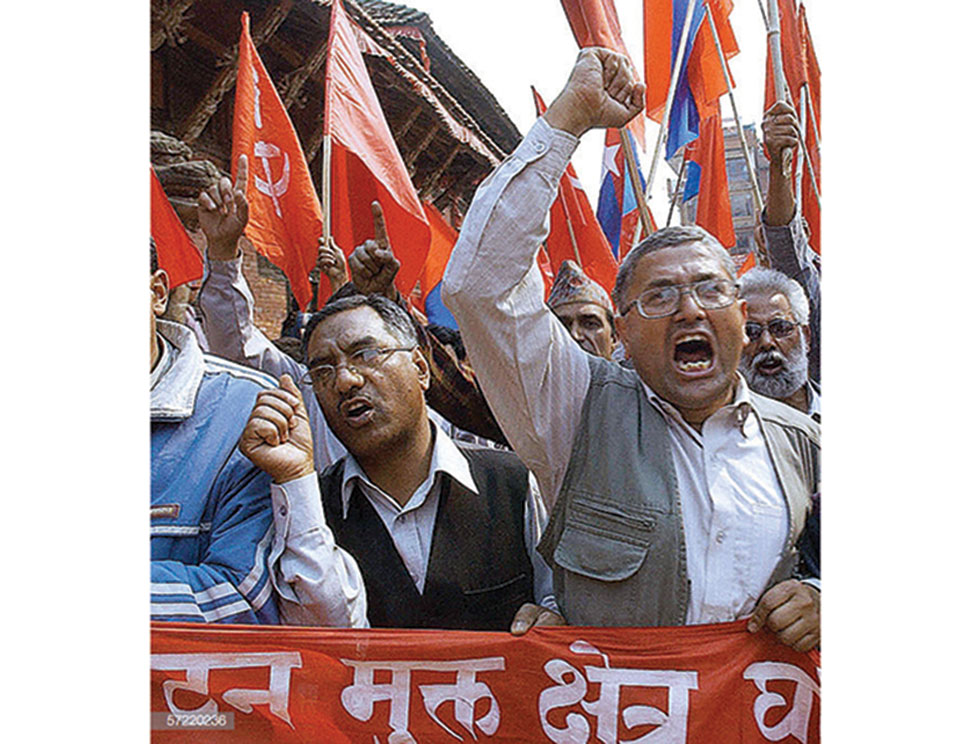 Complying with the geo-political reality in South Asia, the Great King Prithvi Narayan Shah in the late 18th century appropriately defined Nepal as “a yam between two boulders”. However, in due course of time, the equal and great friendship with its two giant neighbors, China and India, intended to ensure Nepal’s overall prosperity, did not live up to the Great King’s expectation. Why Nepal failed to ensure political stability and economic development and keep pace with its historic neighbors in reaping the benefits from their booming economies to advantage?

Nepal adopted the policy of maintaining territorial integrity and identity and exhausted all political, diplomatic and security resources toward achieving this. The politico-military situation in the sub-region, compounded by internal political instability due to the lack of democratic institutions, have been the driving factors defining the conventional approach to national security strategy adopted by Nepal.

Political change of 2006 followed by the protracted transition created a great deal of confusion in redefining national security policies and strategies in the changed political context. Taking undue advantages of prolonged transition, multifaceted threats to national security are emerging due to the fragile democratic institutions, lack of a strong committed government, and a weak national economy.

National security can be defined as the security and protection of national values and interests from all kind of threats.

Furthermore, Kautilya stresses that out of these four threats, the internal threat internally abetted is the most dangerous one and needs to be addressed promptly. If one applies this to the Nepali context, they fit very well. What has most significantly impacted Nepal’s stability is the rise of internal armed conflict as a byproduct of political, social and economic deprivation imposed upon the population.

It was an internal threat mainly abetted by internal factors but at later stage exploited by external factors. Though rulers and political masters always perceived external aggression as the principal threat to Nepal’s existence, such an understanding could not be justified in the post-cold war scenario.

Nepal is most unlikely to face a direct military invasion because of its extensive historical bilateral relation between its neighbors and more importantly Nepal’s geo-political significance for the both. Hence, with regards to its territorial integrity and sovereignty, the assumption of Nepal being vulnerable to a conventional military threat from its neighbors cannot be realistically justified. What Nepal possesses can only be classified as arrays of nonconventional external security concerns or vulnerabilities such as political intervention, economic interference, border management issues, water management issues, social including religious dominion, transnational crimes, international terrorism, ecological disasters, external migration and refugees activities, spillover effect of regional military conflicts, including nuclear catastrophe and so on.

Kautilya’s legacy
Kautilya suggested various prescriptions relevant to the state’s power and international relations. He clearly highlighted the importance of seven constituent elements (prakritis) for prosperous state which are nothing but related to four elements of national power (DIME: Diplomatic, Information, Military and Economy) in the contemporary world.

The most important are the national ‘leadership’, a long missing link in Nepali politics and a strong ‘security forces’ to provide physical security from potentially high internal troubles rather than external threats. The ‘Fort’ in today’s world can be equated to geography/terrain as by virtue of its unique strategic location, Nepal enjoys geopolitical territory that is shielded from external direct threats and it can leverage this element as its soft power.

Furthermore, one school of thought interpreting the Kautilayan theory categorizes three types of neighboring state: enemy (aribhavin), friendly (mitrabhavin) and brotherly (bhrytyabhavin) seems pertinent in Nepal’s context. Nepal’s relationship with India has remained brotherly, and friendly with China. Historical evidence demonstrates that Nepal’s independence and sovereignty can only be preserved by adhering to the policy of sandhi (peace treaty) and asana (neutral) with its big neighbors.

Other Kautilyan foreign policies of samsraya (alliance or seeking protection) or dvaid-hibhava (double policy) are not applicable because of the geopolitical reality. Bilateral peace pacts with two big neighbors will essentially eliminate their suspicions of security threats which otherwise may arise from external sources. This policy, if complemented with economic cooperation with both neighbors, best guarantees Nepal’s sovereignty and prosperity.

Suggested National Security Architecture for Nepal
Kautilya’s prescriptions with regard to statecraft and international relations are still pertinent and can be applied in our context. They can be especially helpful in contemplating Nepal’s national security architecture.

This can be achieved by adopting a national security strategy (Figure 1) that combines the contemporary strategy formulation framework (ends, ways and means) with Kautilaya’s foreign policy theory (sadguna) of peace treaty (sandhi) and neutrality (asana).

The author is retired brigadier general of Nepali Army.
sooryapkha@gmail.com 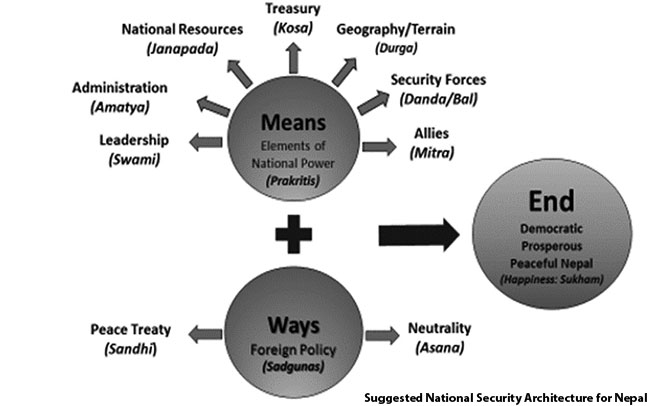 KATHMANDU, Oct 11: Of the eight countries in the South Asian Association for Regional Cooperation (SAARC), Nepal has the lowest... Read More...