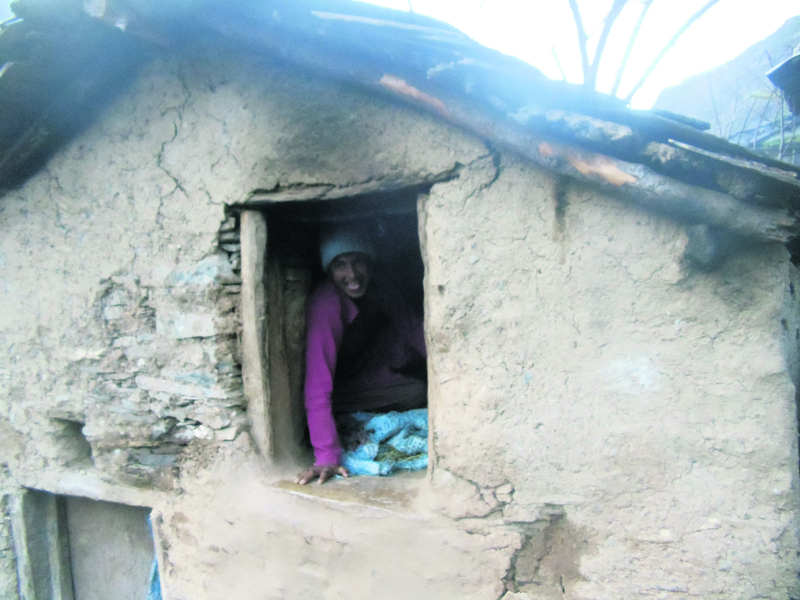 Kalapati Kuwar, a 12 class student, inside a hut made for women to stay during periods. Though she has unrestricted access to toilet at her college in the district headquarters, she said her family does not allow her to use it at home during her periods.

BAJHANG, Feb 8: For Bajhang, toilets are a recently introduced novelty. Within some years they have become ubiquitous. However, male and elder female members of 20 villages in the district have decided to keep them off limits to women during menstruation and during post-delivery period, at least.

With the support of government and non government organizations, households even in remote villages of the district boast of toilets nowadays. But all of these households don’t let menstruating women to use the toilets fearing deities, who they feel ‘despise menstrual blood’.

Restrictions have made it difficult for the women. They are being deprived of using toilets even though they were massively engaged in constructing them. They carried mud and stones for making these household toilets, but they have been asked to not use them when they need it the most.

“While making those toilets, men did not carry even a single stone or timber. We women did all that. Now, we have been restricted to use them,” Kalpana Joshi of Adukali village said expressing anger and disgust at the decision. “It is during menstruation and delivery that we need toilets more than ever. Not only that, we are even discouraged from using toilets even when not menstruating,” she added.

“Though we have toilets at home, we are still forced to relieve ourselves in open fields when we are out for work,” Joshi shared adding that most of the families do not allow women to use toilet even when they are sick.

Kala Khadka of Khaditola village was of opinion that men’s supremacy over women is the reason behind the decision which she put as a “very unjust practice”. “Health workers suggest us to adopt sanitation and hygiene habits. They ask us to compulsorily use toilet. But men do not understand that,” Khadka said. “Men cannot understand women’s problem. They decide everything, even the use of toilets. It would be great relief for us if they could realize that toilets are essential for women too.”

She further stated that in some families women are not even allowed to touch toilets during menstruation or during the post delivery period. “It is taken as very bad practice if women touches toilet. These are considered a part of the house, which cannot be touched and defiled by a female who is menstruating,” she stated.

As women are not allowed to use toilet, they often litter around water sources. When they reach the water sources to wash clothes or fetch water, they answer the nature’s call just there. Or else, they use farms or forests for the purpose. According to Khadka, the ban on toilet has made it very dificult for women. But change is hard to come by, she feels.
“Unless the men think differently, it is not going to change. When those toilets were under construction, they only laid down the stones. Women had carried the stones, mud to construct them, even during their menstruation,” she asserted questioning why were menstruating women not restricted from carrying those materials.

In Khadka’s village, there are 602 families. Each of those families have toilet and that was why the village was declared ‘open defecation free (ODF) village’ three years ago. Thole Sarki, another resident of the village said that women have no choice than to use open areas for peeing and defecating. “They search for water sources, river banks, fields or jungles. That’s their compulsion,” Sarki said, who is known as a social worker in his locality.

Sarki also recalled that he, among few others, had protested when the village was being declared ODF zone. More toilets have been added in the villages since then. But restriction for women to use toilets sustains. “At the time, we were not excited about the announcement as women were not welcomed to use toilets. But they did it anyway,” Sarki said. “Even now, people have not changed.”

Worshipping of deities with strict rituals is commonly practiced by locals in Bajhang villagers. Shamans mostly advocate restricting women’s access, Sarki remarked. “Women have been restricted from using the toilets because of the shamans and the women themselves. The shamans instill fear in them in the name of god and the women believe it and don’t dare to defy it,” he said further adding that most women are not aware of health and sanitation aspects of using toilet.

Navaraj Joshi, local of Adukalika village argued, like many others in the locality, that letting women use toilets during menstruation would anger the deities. “See, you have to be disciplined. You can’t challenge religious matters?” he asserted denying to reason further on the issue.