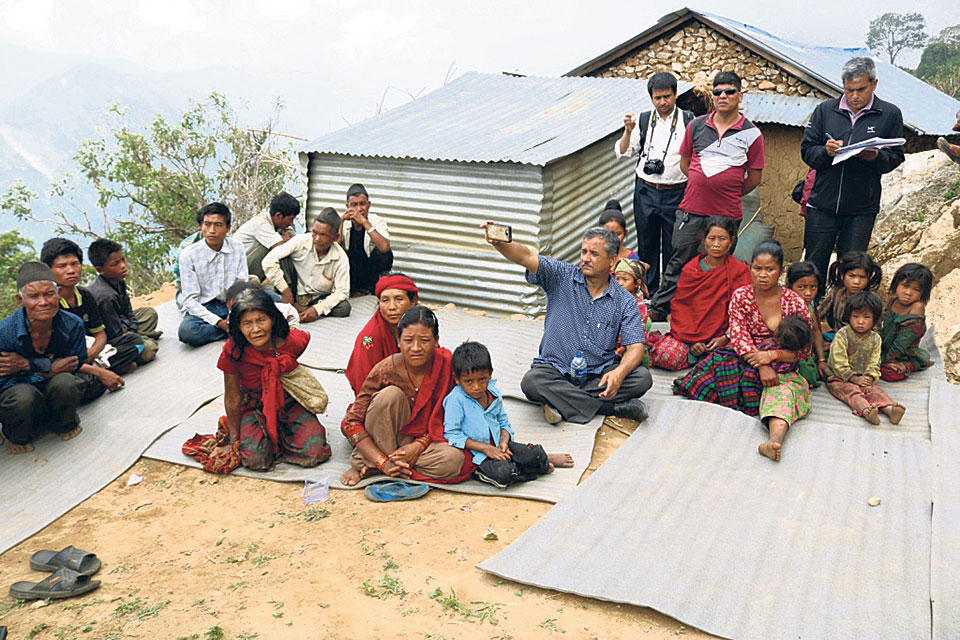 Chepangs, Rorang Rural Municipality officials and stakeholders participate in a discussion program organized at Brushbang hill of the rural municipality, in Dhading in this recent picture. Photo: Sarita Shrestha/Republica

DHADING, May 29: Nutrition, comfort, sanitation and so on are not such familiar terms for Fulmaya Chepang of Brushbang hill of Rorang Rural Municipality. She always ate what was available around. There was no choice. Having to get a full meal would be considered a matter of luck. “There was never enough food to eat, even when I was a nursing mother. It has been a life full of miseries,” she laments.

Life has not changed for this elderly mother. She wears tattered clothes and sleeps on the floor. “It is the same since my childhood. I have not known what it is like wearing new clothes. Even during festivals, we can hardly buy a new pair of clothes.”

Over 30 families of Chepangs have been living in Brushbang hill at an altitude of 1,845 from the sea level for many years now. Isolated in the mountain, neither the government nor civil society ever offered them real help, they say. On the other hand, despite giving them good spaces in their reports, NGOs and INGOs have also done nothing substantial to free them from miseries, they add. Chepangs were and remain poor and underprivileged.

“People would come, talk to us, take our photos, but nobody understood our problem,” Fulmaya reports. “We do not have even drinking water here. We have to walk down the hill for three to four hours to fetch water.”

Health posts are not nearby. When they suffer from fever, they call shamans. Many a time, life is lost, but the Chepangs do not visit the doctor.

“We have no faith in doctors. Neither do we have any access to them,” Fulmaya explains. “We have our dhamis (shamans), who look after us.”

Schools are not available for children. Fulmaya is not literate. Most of the younger generations are not educated either. “Schools are very far from here. How to send small children there? If there had been schools around, maybe our younger generations would have benefitted from it,” Fulmaya said while expressing positiveness towards education.

There are farms to cultivate crops, but water crisis mars everything. Fields are dry, and the Chepang families rely on jungle roots and fruits for survival. “It was easy to find food in our time. These days, it’s very challenging to find food in the forest,” Fulmaya said.

Fed up with hard life, the Chepangs have agreed to shift away from their settlement. Earlier, they used to think that they would never leave their ancestral place. “We could not even think of going away from here. This place has a deep connection with us. We have been living here since ages,” said Fulmaya. “However, in the hope of a better life, we are now ready to move from here.”

“If they arrange facilities for us, maybe we would have a better life. Maybe our children, grandchildren could go to school and lead a good life” Fulmaya stated.

Chepangs have demanded concrete house with toilet and access to health post, school, and water facility. “Everything is important, but water has been our biggest thirst,” Fulmaya said. In fact, those families had been demanding for drinking water facility for a long time now. Since their demand was not heard, they had made up their mind to migrate from their ancestral land. A new settlement for Chepangs being readied

Rorang Rural Municipality has been building a new settlement for the Chepangs and hand it over to them before Dashain. A model village for them is being readied near Talti area of the rural municipality. It is expected to offer all the basic amenities.

“We are working in full speed to build a new settlement for them. We are hoping to finish it before Dashain,” said the rural municipality’s chairperson, Pitta Bahadur Dallakoti. “If possible we are aiming to finish the construction before the festival. If not, Dashain is the final deadline to complete it,” he added.

Dallakoti informed that the settlement would have all the necessary facilities. “Power, road, water, health post, school, toilets, and so forth. They will feel very different,” he said. He further stated that the Chepangs would also be offered farms so that anyone interested in farming could start farming. “They won’t have food and water crisis after migrating to the settlement. We have managed everything for them, even farms to grow crops, vegetables, fruits,” Dallakoti said.

Meanwhile, Fulmaya said that she would believe in the government only after seeing it for herself. “Even earlier, they would come to us during elections, would promise great things, but nothing ever changed for us,” she said. “This time, we are preparing to migrate. It is an excruciating decision for us, but we are doing it for ours and mainly for our children’s future,” she added.

She said that resolving the water crisis would be a great relief for them, along with the ability to send their children to school.

KAVRE, Feb 1: It takes half an hour for Shubhdra Giri of Kattike Deurali-7 of Kavre to reach her school... Read More...