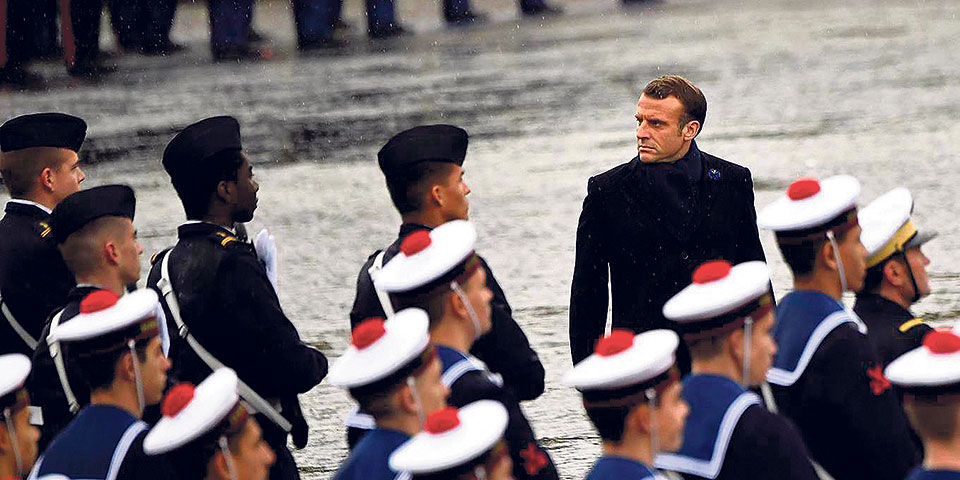 PARIS – In a recent interview with The Economist, French President Emmanuel Macron presented his geopolitical vision of the European Union’s future. In the process, he spoke of a “NATO brain death,” which sounded to many like an echo of US President Donald Trump’s own description of NATO as “obsolete.”

But Macron was not echoing his American counterpart. Macron’s concerns about the state of the alliance reflect his recognition of grim facts on the ground. For the first time since World War II, Europe finds itself without a notable ally or partner. Far from an aberration, Trump’s trade wars and betrayal of allies represent a new norm for the world order.

Multilateralism, human rights, and respect for international law are now under threat everywhere, owing to demagogic attacks on liberal-democratic principles and Trump’s open support for authoritarians. On both sides of the Atlantic, populist politicians regularly mock the idea of an alliance based on shared values, while China and Russia continue to expand their spheres of influence unchecked.

Turkey’s recent invasion of northern Syria, owing to the betrayal of the Kurds who had led the fight against the Islamic State (ISIS), also undercut EU interests.

As David Sassoli, the new president of the European Parliament, has pointed out, Turkey’s incursion amounts to “an act of war carried out by a NATO state”— one that remains officially a candidate for EU accession. Similarly, Macron has warned that Turkey’s “unilateral military offensive … poses a humanitarian risk to millions of people,” adding that the Turkish government will “be responsible in front of the international community for helping Daesh [ISIS] building a Caliphate.” Likewise, German Foreign Minister Heiko Maas has condemned Turkey’s “invasion” as an outrageous and illegitimate act that will trigger a resurgence of ISIS and a new wave of refugees.

These are strong words. The question is whether Europe can match them with concrete action. So far, it has imposed an embargo on European arms sales to Turkey. But Turkey’s military—the second-most powerful within NATO—is not in urgent need of EU weapons. Besides, Turkish President Recep Tayyip Erdoğan now seems to prefer Russian arms, including the S-400 missile-defense system, which Turkey purchased in defiance of NATO objections. Moreover, the EU itself remains dependent on Turkey to hold back the tide of refugees from Syria and elsewhere in the Middle East. Erdoğan has long believed that the mere threat of throwing open Turkey’s borders with the EU will keep European leaders in line.

Or, consider the cases of Ukraine and Georgia, where Russia continues to thumb its nose at the EU. Given that the European project’s raison d’être is to expunge wars of aggression and nationalism from Europe, the EU’s inability to influence events in either Ukraine or Georgia is quite telling. The EU’s failure to protect its own security against a hostile neighboring power reveals the extent to which it has been institutionally weakened.

To be sure, the EU has built a vast internal market and extended protections for civil, economic, and social rights to countries and communities that were once under the heel of Soviet totalitarian rule. But as important as these political and economic victories are, they have proven insufficient for ensuring Europe’s durability.

Hence, Macron (and many others) have concluded that Europe must confront its destiny of becoming a “sovereign power.” Above all, that means creating a European army and developing a fully independent capacity for self-defense. Until very recently, this idea was taboo, particularly in the United Kingdom, which did not want to endanger its “special relationship” with the United States. Although British Prime Minister Tony Blair and French President Jacques Chirac agreed in 2003 to coordinate arms procurement and pool military resources for the construction of a battle-ready aircraft carrier group, no follow-up action has been taken, perhaps—as some think—as a result of US objections.

But now, even Germany is beginning to recognize the need for European defense autonomy. In November 2018, Chancellor Angela Merkel delivered a speech to the European Parliament advocating the establishment of “a proper European army.” And in little-noted remarks at the Bundeswehr University Munich more recently, German Defense Minister Annegret Kramp-Karrenbauer, a likely successor to Merkel, called for a substantial increase in German military spending, and for the creation of a new national-security council to lead a more assertive defense policy.

Such sentiments are hardly confined to Germany: the European Commission’s Eurobarometer survey finds that 75 percent of Europeans favor a common EU defense and security policy, and that a majority expects to see the creation of an EU army in the near future. Moreover, Brexit offers a perfect opportunity for the EU to move toward more shared military equipment and research programs, joint troop trainings, and eventually a common defense strategy.

To that end, France and Germany have committed to reinforce industrial cooperation through projects such as the Future Combat Air System, the Maritime Aircraft Patrol, and the Main Ground Combat System. But these will not get off the ground until 2035. If Europe wants a military posture that is not “brain dead,” it must stop dithering in the face of growing threats.

There is ample evidence to show that a European army would be effective in safeguarding European security interests, even in the immediate term. The jihadists who seized North Mali in 2012 were forced out by a French-led military intervention. That mission has been a success so far. But in the absence of a wider European commitment, can it last?

Noëlle Lenoir is a former member of France’s Conseil Constitutionnel, the Conseil d’Etat, and a former minister for Europe
© 2019, Project Syndicate
www.project-syndicate.org

KATHMANDU, August 17: European Union has welcomed the decision to split CAAN into a regulatory body and service provider. ... Read More...

Compromise? Time ticking down for Britain to come to Brexit agreement

LONDON, April 7: Britain’s government held out the possibility of compromise on Sunday with the opposition Labour Party to try... Read More...

Rs 100,000 each given to families of five children drowned in pond
14 minutes ago