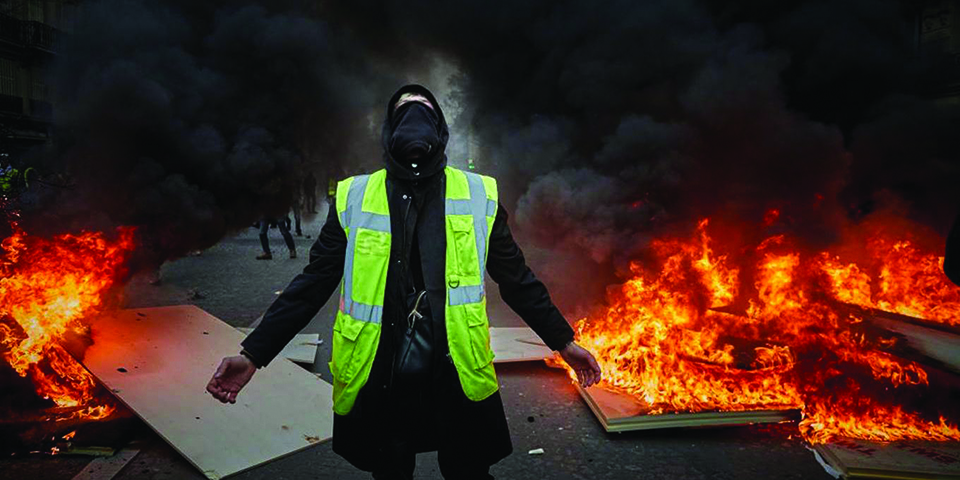 PARIS – Emmanuel Macron’s unexpected victory in the 2017 French presidential election, with 66 percent of the vote, made France seem, at least to some, a safe haven from the populism roiling European politics. His triumph came as a relief to a large majority of the French, as well as to other governments in the European Union and around the world.

But Macron’s victory incited a form of near-hysterical derangement among his opponents on the extreme right and left. The increasingly violent, racist, and anti-Semitic “Yellow Vest” protests are the visible manifestation of that rage.

True, some of the blame for this lies with Macron, and with the technocratic tin ear of some of his team. In particular, the sharp increase in taxes on fuel announced in November 2018—a move intended to advance the president’s climate agenda while helping, at the margins, to balance the budget—disproportionately hit rural and suburban voters, who were already feeling squeezed economically. This triggered the Yellow Vest rebellion.

But as the protests have shrunk in size and intensified in violence, Macron and what he represents have become the focus of the extremists’ hate. For starters, Macron stands out nowadays for his commitment to revitalizing Europe. He rejects the emerging consensus that mainstream politicians can defeat populism only by downplaying their support for the EU. Instead, Macron relentlessly asserts his belief in a strong, democratic, and prosperous Europe that is capable of acting with authority in the world.

Moreover, Macron has so far pressed ahead, despite the protests, with the reforms he promised during his campaign. Laws to increase labor-market flexibility, ensure ethical behavior by elected officials and civil servants, and modernize the country’s obsolete university entrance system were adopted in less than a year. But Macron underestimated the difficulty of reducing France’s budget deficit and public debt to comply with eurozone rules, contributing to his decision to raise fuel taxes last November.

Today, Macron’s opponents from across the political spectrum portray themselves as part of some spontaneous popular movement. But the truth is that many of the politicians Macron defeated in his victorious campaign are now out to undermine him. To the astonishment of many, former President François Hollande, whom Macron once served, now openly encourages the Yellow Vests to harden their protests. Laurent Wauquiez, leader of the center-right Republicans, has actually put on a yellow vest. Meanwhile, far-right leader Marine Le Pen and far-left leader Jean-Luc Mélenchon both sense revolutionary possibilities in the protestors’ rage.

The Yellow Vests may seem to resemble other populist forces in Europe, in particular Italy’s Five Star Movement. But the French protesters are extremely violent in both word and deed. Macron and his wife are threatened with death almost daily. This is reminiscent of the vicious attacks against Léon Blum, France’s Socialist prime minister in the mid-1930s, who was later sent to Buchenwald by Marshal Philippe Pétain’s collaborationist World War II government.

Charles Maurras, a prominent Catholic essayist and journalist of the interwar years who became a member of the prestigious French Academy, called Blum “a monster” and “a man who deserves to be shot, but in the back.” Today, the far-left deputy François Ruffin vents his hatred of Macron in similar terms. Not since the 1930s has France experienced such hysteria against a political leader in office.

Violent words go hand in hand with violent deeds. Stores have been smashed and looted. Public buildings, parliamentarians’ offices, and even the private property of the President of the National Assembly have been destroyed by fire. Deputies have been threatened (including with a gun), newspaper headquarters have been ransacked, and more than 1,500 police officers have been injured.

How did France get to this point? It is no secret that Kremlin-funded television channels RT and Sputnik—followed by social networks and other TV stations—have provided platforms that encourage the incitement of rage, anti-parliamentarism, lies, disinformation, racism, and anti-Semitism. France seems to be living daily through the “Two Minutes Hate” of Orwell’s 1984.

The material and moral damage to the country is considerable. But there will not be a civil war. A clear and broad majority of the French are exasperated and shocked by rising violence and intolerance. The CFDT, the country’s most important labor union, has taken a stand against “all forms of violence.” Laurent Berger, its leader, has argued that, “If a trade-union organization had been responsible for as much violence in a movement that it triggered, it would be banned for at least 20 years.” And Macron himself is gaining renewed legitimacy for facing down the crisis with self-control and sticking to his reform agenda.

But the Yellow Vest movement is far from over, and the clock cannot be turned back. First and foremost, the authorities must punish the perpetrators of violence and vandalism severely, beginning by requiring them to compensate victims, and eliminate all forms of impunity. Ideologically motivated assault and destruction must be treated like any other violent crime. Anything less would encourage those who would embrace violence in pursuit of their aims.

Second, fake news and abuse of social media, which is endangering social cohesion and democracy itself, must be confronted head-on. Macron’s great “National Debate” via local meetings and the Internet is providing a useful counterweight. He continues to assert himself as a truly outstanding debater. But this unique experiment will end on March 15. For the sake of French and European democracy, one hopes it will give a new impetus to the much-needed reforms that France has been awaiting for decades.

Noëlle Lenoir is a former member of France’s Conseil Constitutionnel, the Conseil d’Etat, and a former minister for Europe

Madrasa education to be included in government curriculum
27 minutes ago