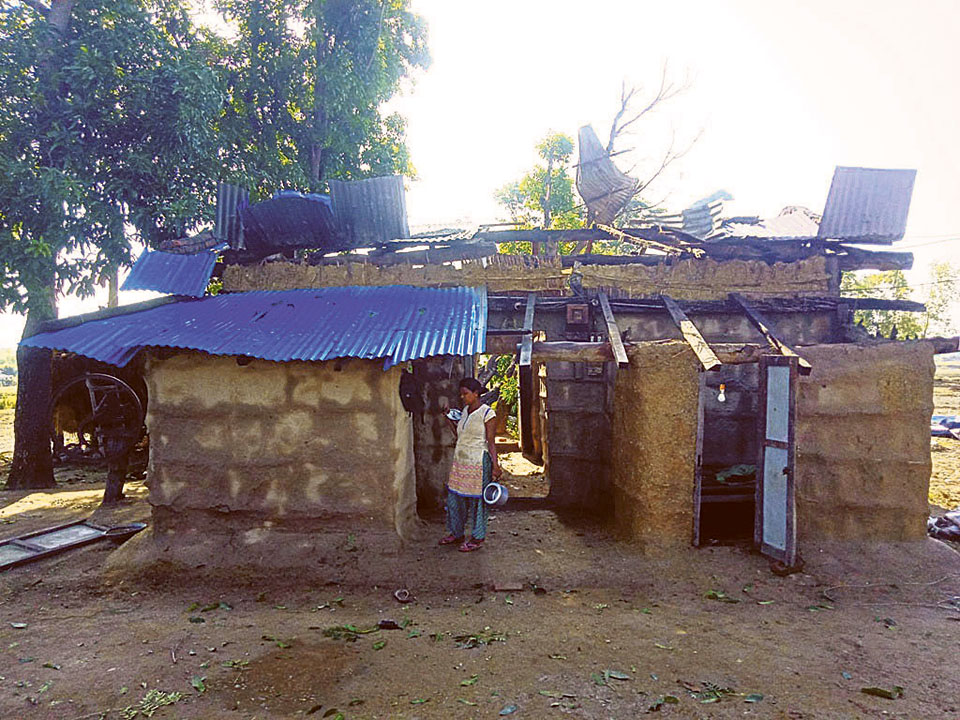 DHANGADHI, June 8: A storm on Thursday evening killed two people and injured 99 others in Kailali and Kanchanpur districts. The storm felled trees, electricity poles and tore down the tin and thatch roofs of many houses. Large areas in the districts are without power while several roads that were blocked by felled trees have reopened Friday.

Around two dozen local newspapers could not go to print on Friday while the FM radio stations were forced to halt operations owing to the power outage.

The deceased have been identified as Lahanu Dagaura of Tikapur Municipality–2 and Bir Bahadur Chaudhari of Godavari Municipality–8 of Kailali.

According to police inspector at Kailali District Police Office Prakash Bahadur Dangi, Chaudhari was riding a motorbike when it collided with a tractor during the storm. “He died on the spot,” Dangi said. “He was 31.”

There was a panic among people as heavy storm wreaked havoc in seconds. In Kailali district alone, 76 people have been reported injured. According to the chief district officer of Kailali, Yagya Bahadur Bohora, two of the injured were sent to India for treatment. “The storm has left many injured and some have received serious injuries. Two people have been sent to hospitals in India for treatment,” he said. Among the injured, 66 have already returned home after treatment.

In Kanchanpur, of the 23 people injured, eight are still undergoing treatment at the Seti Zonal Hospital while 15 have returned home after treatment.

Most of the schools remained closed in the two districts on Friday. School buildings also suffered damage due to the storm.

Similarly, police stations, ward offices, and private quarters of government officials have also suffered damage. According to police inspector Dangi, Traffic Police Office of Dangadhi has also been damaged. “We have yet to assess the property damage caused by the storm,” Dangi said.