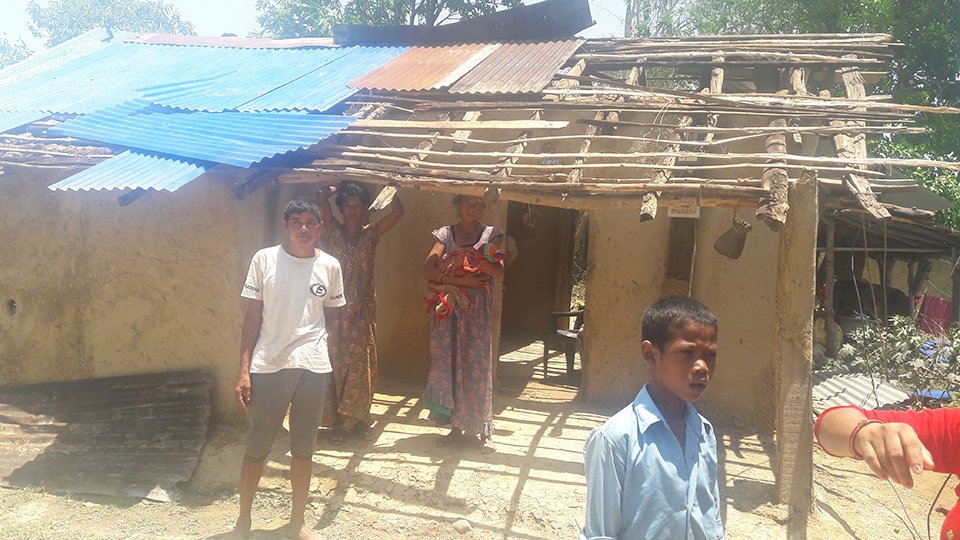 Houses in Mukta Kamaiya settlement of Jugeda where roofs were blown away by the wind.

DHANGADHI, June 9: The scorching sun was setting at last and locals in various parts of Kailali were returning home for the evening when the devastating storm on Thursday descended upon them. There were no dark clouds in the sky and for a few minutes, people could not believe what was happening all around them. The shock weather phenomenon left two people dead and injured 99 others. In those 15 minutes, 1,745 people in Kailali were displaced from their homes.

The storm struck around 7:55 pm, leaving in its wake thatched roofs thrown onto the ground, trees uprooted, electricity poles knocked down and dust hovering in the air and playing tricks with visibility.

The storm left hundreds in Kailali and Kanchanpur displaced from their homes, it has been learnt. More than 1,200 electricity poles were leveled.

That evening, 82-year-old Ram Singh Rawal of Bedkot Municipality-10 in Kanchanpur was with his wife, daughter and grandchildren in their mud house with its tile roof . His daughter-in-law was cooking in another house. On hearing the storm noise, they closed the door. "However, after a while our house shook and fell upon us. The walls caved in and crushed us," said the octogenarian .

Fortunately, the family was rescued by neighbors on time and taken to Seti Zonal Hospital. Four of them were injured. They spent the night under the open sky.

The storm also flattened the house of Jit Bahadur Chaudhary of the freed Kamaiya community in Dhangadhi Sub-Metropolitan City-12. His family also had to sleep under the open sky. Most local houses had zinc sheets for roofing these were blown away.

The incessant rain that followed inundated what remained of most of the houses . "It has been just a month since we built our home with a loan. It was not even complete. We now have to shelter with our neighbors," said Jit Bahadur's daughter Rabina who was injured in the storm.

Bandhuram Chaudhary and his seven member family is also sheltering at their neighbor's house. "Rain has damaged all our foodstuff and we had to sleep on empty stomachs," he said .

As the wind toppled more than 1,200 electricity poles in the two districts, locals are spending their nights in the dark since the last two days. The high temperatures have made life more difficult still . The mercury is around 42/43 degrees Celsius and they can't use electric fans.Tents distributed to victims

According to Chief District Officer (CDO) Bohara, distribution of tents has begun . "We have formed a committee in each ward led by the ward chief to make sure no genuine storm victim gets left out," he said adding, "We will soon distribute other relief material also."

KAILALI, June 9: The Sudurpaschim State government has decided to provide Rs 150,000 each to the families of those killed... Read More...