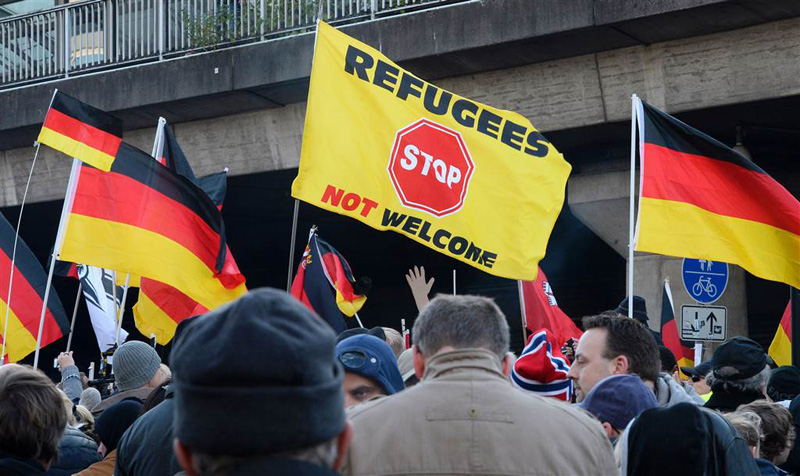 BERLIN: As Germany prepares for this month’s federal election, the country seems remarkably resistant to the populist challenge that other Western societies have faced. With the right-wing populist Alternative für Deutschland (AfD) and their far-left competitors Die Linke both hovering at around 10 percent in the polls, a victory for Chancellor Angela Merkel is widely viewed as the most likely result. But that doesn’t mean that Germans are satisfied.

A Merkel-led government could either be a continuation of the grand coalition between Merkel’s Christian Democrats and the center-left Social Democrats or some other political constellation. In either case, it would seem to imply that Germany is less vulnerable to the populist temptation than some of its Western counterparts. This is often attributed to two structural causes.

The first is Germany’s singular historic track record of right- and left-wing totalitarianism. And, indeed, the legacy of Third Reich hyper-chauvinism and “actually existing socialism” in the eastern part of the country has inculcated in most Germans a cautious centrism, rendering extremist parties unsupportable for the majority of voters. In Germany—even more so than in most other countries—the more extreme a political party becomes, the more limited its popular backing.

The public response to recent inflammatory statements from prominent AfD leaders seems to confirm this rule. The call by Björn Höcke, the AfD’s state leader in Thuringia, for an “180-degree turn” from the post-World War II tradition of atoning for the crimes of the Nazi era, and AfD deputy leader Alexander Gauland’s reference to “disposing of” Germany’s integration minister of Turkish origin “in Anatolia,” repelled voters. Likewise, Die Linke’s call to abolish NATO, together with its cozying up to Russia, has left the party politically toxic in most of western Germany.

The second commonly cited cause of Germany’s resilience to populism is its economic strength. The country’s unemployment rate is currently at a record low, and GDP has grown by nearly 10 percent since 2013. Add to that a functioning welfare system, and it is clear why the inequality-focused outrage that has fueled voter revolts elsewhere is gaining little traction in Germany.

But this does not mean that all is quiet on the populist front. In fact, the relatively weak support for populist parties in German elections obscures an undercurrent of dissatisfaction in German society that bears striking similarities to the anger that has fueled the rise of anti-establishment parties in Europe and beyond.

According to one recent opinion poll, 71 percent of German voters actively distrust their government, while 70 percent have no faith in the reporting of the mainstream media. Established political parties fare even worse: 80 percent of Germans trust political parties “little or not at all,” and nearly 60 percent no longer believe that they can devise solutions to pressing problems.

Moreover, in a list of “trusted professions” compiled by the Global Trust Report last year, German politicians came in dead last—well behind insurance agents and advertising specialists. At the same time, the number of attacks—from insults to property damage to bodily harm—against elected officials tripled in 2016.

Nowadays, even public support for democracy cannot be taken for granted in Germany. According to one recent poll, only 62 percent of young Germans agreed that “rule of the people by the people” was the best form of government—hardly a robust majority.
Beyond such general skepticism, there is a clear and growing gap between the views of ordinary citizens and the government’s policy approach—the so-called “Berlin consensus.” This is particularly apparent with respect to migration: contrary to the view shared by virtually the entire political establishment, a majority of Germans wants to close the country’s borders to refugees, with 70 percent believing that “Islam does not belong to Germany.”

Perhaps more surprising, there is a similar disparity between voters and political leaders on certain economic issues. Only about 31 percent of German voters actively oppose kicking Greece out of the eurozone—something that German leaders have proved loath to do. And two-thirds of Germans support protectionist measures, derided among most politicians, to safeguard German jobs.

Given this widespread support for such positions, it is too early to say that Germany is somehow immune to populism. True, historical taboos and a booming economy have so far prevented popular discontent from surging into the corridors of power. But that discontent continues to bubble beneath the surface—manifested on social media and in political absenteeism—and it shows no signs of waning.

So, rather than taking comfort in populist parties’ relatively weak performance in this month’s election, Germany’s political class should take action. For starters, political parties should recognize Germany’s “hidden” populism for what it is: a serious structural challenge. They should then redouble their efforts to reach out to disgruntled voters on the left and the right who—justifiably or not—feel economically, culturally, and politically disenfranchised.

Here, post-election proceedings may prove decisive. While continuing the current coalition may seem advisable in policy terms, it could well strengthen the hand of advocates of radical political change. It may seem paradoxical, but fighting extremism in Germany may demand less political centrism. In fact, four more years of “stability” in Berlin could ultimately bring Germany’s anti-populist Sonderweg to an abrupt end.

The author is Head of the International Policy Department of the Friedrich-Ebert-Stiftung © 2017, Project Syndicate www.project-syndicate.org

Our most vulnerable need protection during the pandemic. We can then celebrate the constitution

Will your daughter look upto to the Constitution of Nepal 2015?

What would be the dream of parents for a daughter born today on constitution day in the middle of a... Read More...

The story of full, half and empty glass

It is time for true nationalists to form a united front to not only implement the constitution but also to... Read More...