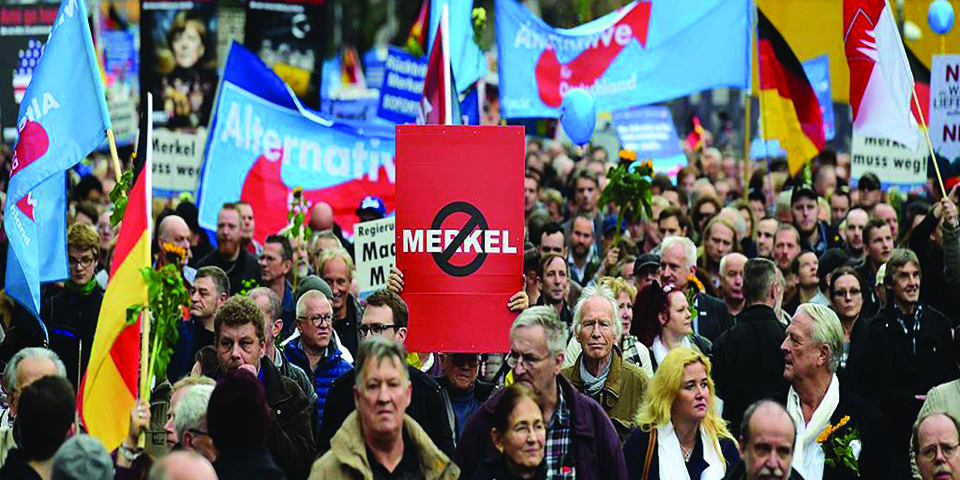 Combining anti-establishment rhetoric on cultural and economic issues has worked well for right-wing populist parties. Will it work in Germany?

BERLIN – If opinion polls counted as elections, large parts of Germany would already be governed by the far right. In several eastern German states, the Alternative für Deutschland (AfD) has established itself as the strongest political force. Almost everywhere else in the country, the party currently ranks second—on par or just ahead of the struggling Social Democrats (SPD) and behind only Chancellor Angela Merkel’s Christian Democrats (CDU).

In coming weeks, matters could get even worse. In regional elections in Bavaria on October 14 and in Hesse two weeks later, the AfD is poised to enter the two last remaining regional parliaments without far-right representation.

Concerns about immigration continue to fuel this surge. In the eastern city of Chemnitz, recent anti-foreigner riots and pro-tolerance rallies provided a stark reminder of how divided the German public remains on migration.

But it would be a dangerous miscalculation to regard the AfD as a xenophobic, single-issue party. The AfD has always been a political chameleon, cleverly exploiting mismanaged issues. This arc of anger began during the euro crisis, proceeded to migration after the summer of 2015, and most recently discovered integration and Islam as wedge issues to boost support. With each turn, the party widened its appeal. Now, it seems to have another target in its sights: liberal economics and a vulgar ethno-socialism.

This turn to “social justice” issues is counterintuitive. The AfD was born in 2013 as a euro-critical “party of professors,” many of them economic liberals, and neoliberalism remains part of their offspring’s DNA. To this day, the party’s official statements promote free trade, increased competition, a lower tax rate, and austerity in southern Europe.

But what worked for the one-time professors’ party is unlikely to pave the AfD’s path to power. For many blue-collar voters, particularly in eastern Germany, neoliberalism is a non-starter. Recognizing this, the AfD leadership has recently started to shed the pro-business baptism gown that the party has long outgrown. The goal is to establish the AfD as a new mass party, or Volkspartei, which could prove a mortal threat to what is left of the SPD, as well as to Germany’s wider political system.

In Bavaria and Hesse, the AfD’s campaign already reflects this change. Calling for higher pensions and improved medical services in rural areas, and criticizing high rents, the party aims to “be social without turning red,” as one campaign slogan puts it. And the AfD leader in Brandenburg, Andreas Kalbitz, recently announced that the party plans to focus on “social justice” in upcoming elections in three eastern German states next year.

The driving forces behind a more “socialist” AfD can be found in Germany’s east, where firebrand party leaders like Björn Höcke of Thuringia have long called for “a party of patriotism and solidarity.” For many, that is a thinly veiled bow to National Socialism. Höcke and Jürgen Pohl, an AfD Bundestag member, recently put forward some of the program’s key ingredients, which include higher pensions and inclusion of the self-employed in the state-run pension funds—policies that would focus on ethnic Germans.

The AfD will hold a special party convention early next year to formalize programmatic changes and establish a unified position on social issues. The explicit aim, according to Höcke, is to combine “identity and solidarity” in order to reject “neoliberalism and its history of failure.” While a heated internal debate can be expected, the Höcke wing currently seems to have the wind at its back.

At the federal level, an AfD majority is highly unlikely as long as the German economy is booming. But a much stronger far right is a near-certainty. Combining anti-establishment rhetoric on cultural and economic issues has worked remarkably well for right-wing populist parties elsewhere, and the question for many German observers is not whether this formula will work in Germany, but how well.

The polls are not reassuring. A study presented last week by the Bertelsmann Foundation, an independent think tank, stresses that issues such as income distribution or affordable housing can effectively act as “bridges” between the extreme right and voters at the political center. Up to 30.4 percent of German voters are open to AfD positions, according to the study.

In view of this potential, much will depend on how Germany’s center responds. One idea is that a division of labor between the CDU and the SPD could diffuse the current challenge. The CDU could recapture AfD voters by strengthening its conservative positions on cultural and identity questions. The SPD, by contrast, would move to the left on social and economic issues, stressing equality, solidarity, and justice, and thus closing the ideological gap that is empowering the AfD.

But this will be difficult to do for the CDU and the SPD. Locked in an unpopular grand coalition, such an ideological realignment would make finding common ground in the government increasingly challenging and could well result in an early federal election. And such an outcome would only further strengthen the AfD.

Michael Bröning is Head of the International Policy Department at the Friedrich-Ebert-Stiftung, a think tank affiliated with the Social