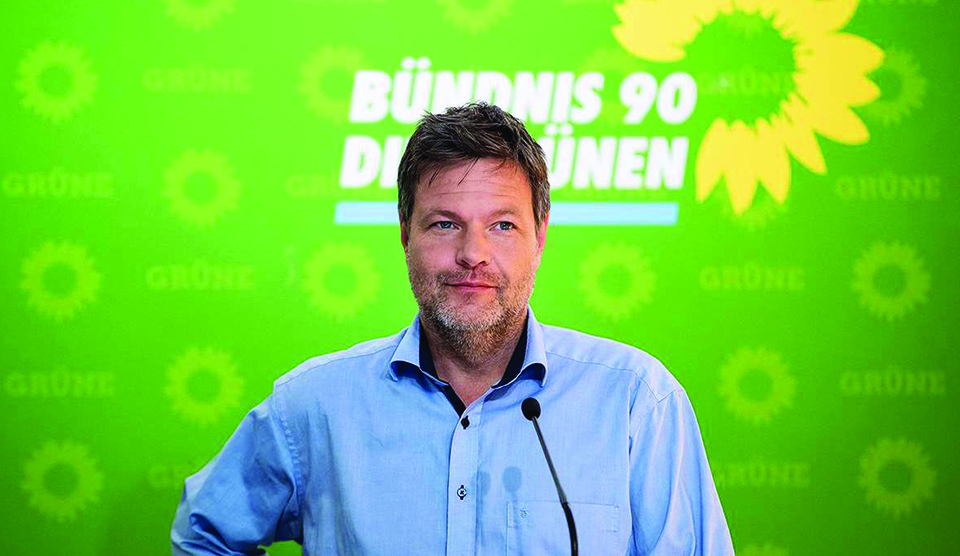 With Germany’s traditional parties continuing to hemorrhage voters, public support is swinging to the Greens, whose new leaders have been preparing the party for prime time

BERLIN – If current polling trends continue, the next German chancellor could well be Robert Habeck, the co-leader of the Greens. His party has emerged as the strongest political force in the country in recent polls, and for weeks Habeck himself has ranked as one of Germany’s most popular politicians.

The Greens owe this seismic shift in their favor to several factors; chief among them is the German public’s growing frustration with the ruling “grand coalition” of the Christian Democratic Union (CDU); its Bavarian sister party, the Christian Social Union (CSU); and the Social Democrats (SPD).

Annegret Kramp-Karrenbauer, who succeeded German Chancellor Angela Merkel as the leader of the CDU in December, has been trying to restore her party’s popularity by emphasizing her conservative track record. But the CDU’s star continues to fall, and recent polls indicate that a mere 13 percent of voters consider Kramp-Karrenbauer a suitable candidate for chancellor.

The SPD is faring even worse. Following a disastrous showing in the European Parliament election in May, the party is currently being administered by a trio of interim leaders. Not surprisingly, only a minority of Germans believe the grand coalition will survive the coming months.

As the coalition crumbles, the two parties that stand to gain are the Greens and the right-wing populist Alternative für Deutschland (AfD). Founded in 1980 as a pacifist environmental movement, the Greens have recast themselves as the natural political home of culturally liberal, economically pragmatic urban middle-class voters.

The new dispensation is embodied in the party’s two leaders, Habeck and Annalena Baerbock, who both belong to the movement’s “Realo” wing (as opposed to the “Fundi” faction of environmental hardliners). Since taking joint control in early 2018, Habeck and Baerbock have been quietly overhauling the organization’s traditional image as the “party of prohibitions.” The party’s hallmark proposals—for example, vegetarian food in all workplace cafeterias and a tripling of fuel prices, among others—have largely disappeared.

Moreover, while the Greens have shifted to the center, the center has moved toward the Greens. Once-radical Green demands to phase out nuclear power and legalize same-sex marriage are now government policy and fully in keeping with mainstream views.

Likewise, following intense heat waves and global protests highlighting the threat of climate change, most German voters now believe the issue should top the political agenda. The Greens, of course, have been saying that for years, which is why they win in a landslide when survey respondents are asked: “Which party has the best answers to the questions of the future?”

And then there is Habeck himself. Despite having spent over a decade in politics, he is widely perceived as an anti-politician, combining authenticity and straightforward language with personal charisma. He holds a doctorate in philosophy and has published novels and children’s books, as well as translated volumes of poetry, many with his wife. He has also defied left-wing orthodoxy by advocating a progressive form of patriotism (a sensitive topic in Germany), which could endear him further to voters in the center.

In light of Habeck’s sudden rise to prominence, some leading media figures have already labeled him “Germany’s next Kennedy.” But a more appropriate comparison is to French President Emmanuel Macron. Like Macron, Habeck has captured the imagination of an enthusiastic voter base, and filled an ideological vacuum left by the political establishment. And while there are differences in style and substance, the two leaders hold similar views with respect to European integration, multilateralism, migration, and climate change.

Moreover, both men are, in their own way, polarizing figures. Since winning the French presidency two years ago, Macron’s support has plummeted. Beyond the “yellow vest” (gilets jaunes) protests that have roiled Paris and other cities, two-thirds of French voters now say they are dissatisfied with Macron’s performance.

Macron is learning the hard way that winning an election is not the same thing as winning the political debate. The German Greens should take note, especially given that some of their political ambitions remain unclear. The party has yet to present convincing positions on a wide range of foreign-policy and domestic issues that future German governments will have to address. Once in power, the Greens could thus find themselves facing a Macron-esque dilemma: moderate their agenda and risk alienating the base, or push through far-reaching reforms and risk a popular backlash.

To be sure, Germany is not in the same boat as France. Unemployment remains low, and a majority of Germans are content with their economic situation. But polarization between haves and the have-nots is growing, and the high social costs of the Greens’ environmental and energy proposals could face stiff resistance. With the AfD waiting in the wings to exploit popular discontent, the Greens’ favorable standing in current polls should not be taken for granted. One way or another, a Green government would face opposition from its own supporters or from the broader public, depending on which route it chooses. Its success would depend in large part on its coalition partners. If support for the Greens persists, the party will have to decide between assembling a left-leaning alliance or reaching out to the center-right CDU/CSU.

That choice, assuming it becomes necessary, will belong not just to the Greens, but also to their constituents and the other parties. Habeck may well accede to the chancellorship, but it is impossible to predict the coalition he will have to work with, or the mood of the country he will govern.

Michael Bröning is Head of the International Policy Department at the Friedrich-Ebert-Stiftung, a think tank affiliated with the Social Democratic Party of Germany