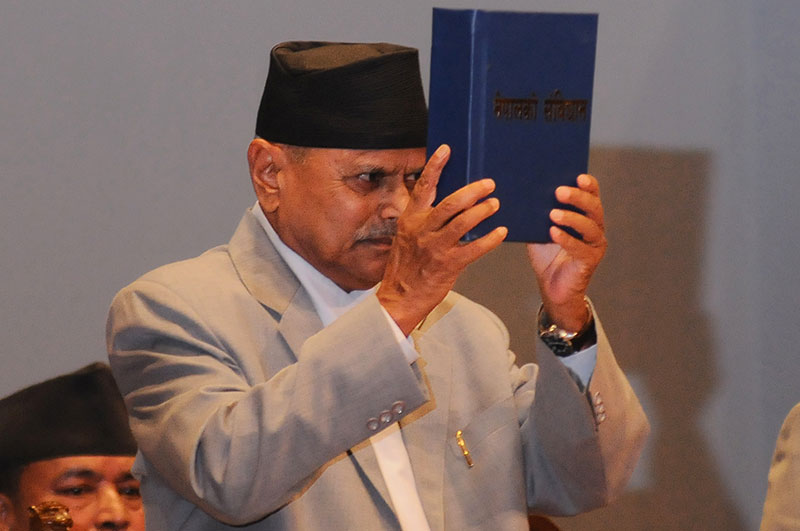 Suffering severe public humiliation can plunge an individual into depressive pits of darkness with dire consequences for the mental and physical wellbeing of the person. The first Vice-President of the Federal Democratic Republic of Nepal perhaps learnt relatively early in his career that dishonor was the price that an ethnic Madheshi had to be prepared to repeatedly pay in order to survive in public life. That’s how Parmanand Jha probably endured the disgrace of being thrown out of the race of permanent judgeship of the apex court on unsubstantiated charges.

Even as an elected representative, Veep Jha began his term on a controversial note when he chose to wear Dhoti-Kurta to his inauguration and decided to take the oath of office in Hindi. For the nationalist Nepalis of left, right, center, and everything in-between, the conduct of the newly elected public official was profane to the point of being sacrilegious. The Supreme Court of Nepal—the ultimate protector of the purity of patriotism in the country—later ruled that the Veep’s oath was unconstitutional.

Unlike the second body with the same name, the first Constituent Assembly in the history of Nepal knew that it was merely representing the sovereignty of the people and was not a sovereign by itself in any way. It made peace with minorities by amending the constitution to allow elected officials to take oath in their own languages. His point made, Jha then agreed to be sworn-in again to the same post after hanging in the limbo for almost six months. Chastened, the Veep was never seen in public except in the official outfit of hyper nationalists.

Veep Jha spent his term languishing in the corner room of Election Commission building where few cared to find out whether he had anything to keep himself busy. The vice-president continues to be the only ceremonial post in the current constitutional setup with no role and little responsibility beyond an obligation to be present at official functions.

After retirement, Jha has discovered that even his presence is no more required at public ceremonies. On Republic Day this year, he had gone all dressed up to watch the parade at Tundikhel only to discover that no seat has been assigned to the first vice-president of the country in the viewers’ enclosure. Sometime last month, the Veep went public with his complains about wilful neglect of the state that doesn’t pay his dues and has saddled him with cumbersome obligations of maintaining security detail only to be poured with prompt scorn. Jha is a deeply religious man; he will probably endure his karma just as he did after being left out of the judgeship race in the past.

FALLEN ANGEL
Even though Jha later turned into a conformist, he had begun his political career as a Madheshi activist. There is a reason he offends nationalist sensitivities of pure patriots that watch Hindi movies; listen to Hindi songs; stay late to catch Kapil Sharma’s comedy shows; speak Hindi to their professional colleagues and commercial partners; issue instructions to most workers in Hindi; but can’t stand when it is pointed out that just as Nepali is the language of the State in Nepal, Hindi rules the roost in the marketplace. Hindi is the de facto lingua franca of bazaars. Jha had merely attempted to confer legitimacy to everyday reality with his oath.

Former President Ram Baran Yadav must be wondering where he went wrong even though he did everything by the book. He had a successful medical practice in Janakpur when he was picked up to be in the team of doctors attending upon BP Koirala. After a while, he chose to remain a private physician of the late leader. Upon BP’s death, he resumed his practice and prospered in his hometown. When Nepali Congress once again began to function like the private limited company of the Koirala clan, he rose through the ranks to become its Secretary General. Things turned topsy-turvy only when GP Koirala realized that there was no way for him to be the first elected president of the newly declared republic.

Initially, Yadav was chosen to be the loser in the presidential elections. However, Koirala’s chutzpah at the last moment worked wonders. Koirala (Lalu Yadav used to call him Guruji!) deftly mobilized his contacts with Mulayam Singh in Uttar Pradesh to neutralize New Delhi and made Upendra Yadav choose caste loyalty over community solidarities. Ram Baran Yadav remained beholden to Koiralas for as long as he was in office. What he failed to realize, or refused to accept, was the fact that his strength lay in being a model Madheshi rather than whatever he thought of himself. After the second Constituent Assembly came into being with much less Madheshis, his influence began to wane.
Unlike the wheels and deals that had resulted in the restoration of the dismissed army chief to his post and subsequent resignation of the prime minister, political conspiracies leading to the 16-Point deal completely bypassed the president. When Yadav tried to raise some valid concerns, he was silenced in an unceremonious manner.

Given his political and educational qualifications—a ferocious Naxal with little formal schooling—Premier Kahadga Prasad Sharma Oli can be forgiven for not being able to differentiate between a specialist doctor and a paramedic that usually administers injections. Perhaps because of his background, Premier Oli often takes pride in his rudeness. But even the-then Premier Sushil Koirala paid no heed to the presidential pleas for the moderation of chauvinistic politics. A lawyer like Krishna Prasad Sitaula jeeringly dismissed Yadav’s appeals and darkly hinted at calamitous consequences should the president decide to listen to the voice of his conscience.

When CA-I was functional, Yadav used to roar like a lion against meek Madheshis that talked about equality with dignity of diverse identities; equity with reparation for the past neglect; and construction of stronger national solidarities upon fresh constitutional foundations. After the PEON recaptured the State with the help of the judiciary, he learnt to wag his tail like a well-trained tiger of a circus. While promulgating the constitution that had alienated the people from their State, President Yadav appeared more like what they call in Nepali gau prani—helpless creature akin to a cow. It has been such a long journey for the fiery revolutionary of Mithila from being an icon of freedom struggle to the symbol of meek Madheshi’s innumerable vulnerabilities.

In less than a year, Yadav must have begun to accept that no matter how hard one tries, even perfect mimicry in thought, conduct and action can’t earn a seat in the rank of masters. His advisers may have told him that repeatedly bowing to a controversial constitution will look poignant on television screens. In reality, it appeared pathetic in the extreme. Madheshis were mourning their martyrs mercilessly slain by the security forces, many shot from point-blank range and mostly above the waist. Perhaps the Presidential Palace was bathed in celebratory illumination when most Madheshi householders had chosen to switch off their lights in silent protest.

FORKED CONSCIOUSNESS
In Marxist theory the “false consciousness” is a way of thinking that prevents the subaltern from perceiving the true nature of its social or economic oppression. Sociologist and civil-rights activist W. E. B. Du Bois—born an African-American but died a Ghanaian—talks movingly about what he calls the “double-consciousness”. It is a collective feeling of disgrace that borders on self-hatred where members of the dominated community are beset with the shame of “… this sense of always looking at one’s self through the eyes of others, of measuring one’s soul by the tape of a world that looks on in amused contempt and pity.”

Somewhere between delusions of the subaltern and the distress of the subjugated population, the Madheshi middleclass falls in the category of a subordinate group that suffers from what can perhaps be termed as a “forked consciousness” of false hopes and intense anxiety.

For the Kathmandu bien-pensant, there is no problem in Tarai-Madhesh except dowry, Dalits and the development-deficit. Policy-making in New Delhi has gone back to the limousine liberals that are chauffeured to the Lodhi Gardens for their morning constitutionals where they discuss the Brexit aftermath, the Trump bump and the Xi Jinping seesaw rather than the plight of Madheshis. Under the circumstances, toadyism appears the sole option of survival. But experiences of Jha and Yadav aren’t inspiring. Perhaps they too will someday realize that there is no real alternative to sustained struggle for dignity and democratic rights.

UML’s taunting and insulting of Madheshis led to Saptari deaths

After five people were killed in Saptari last Monday, Madheshi Morcha has been especially aggressive toward CPN-UML. It also withdrew... Read More...