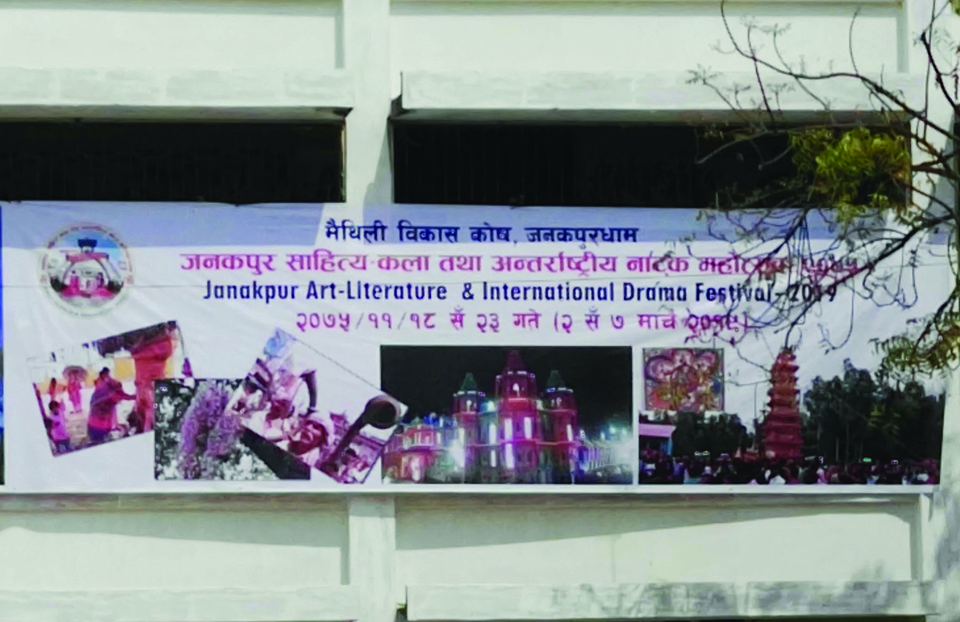 In difficult times of identity crisis and loss of dignity, uselessness of art comes quite handy. Arts help endure whatever the outcome and conserve energy for another struggle

Janakpur retains its small town ambience despite being the capital city of Province 2 of Federal Democratic Republic of Nepal. Strangers greet visitors like long lost friends. Shopkeepers inquire about place and length of stay. Women can be seen selling twigs in the morning that some pilgrims prefer to use to clean their teeth. Then there is the balmy weather of early spring to welcome visitors with warm sunshine.

The conversation in the streets takes place in at least three languages. Everyone above 50 years of age, almost all women and the entire working class, talks to each other in Maithili. Hindi seems to come more naturally to shopkeepers and returnees from West Asia and Malaysia. Many youngsters, however, prefer to chat in Nepali. Realization of benefits of learning the language of power in Nepal apart, the ‘boarding schools’ of the profit sector that prohibit students from speaking any other language within their premises have begun to show their impact upon the preferred  medium of expression.

The wholesale privatization of education in the mid-1980s introduced English as language of aspiration in the hills and mountains and Nepali in the urbanizing settlements of Madhes. Marketization appears to have helped make Mahendrism somewhat more acceptable to the masses. Coercive approach of the state had incited resistance. Persuasive method of the profit sector has bred conformism.

Ribbon development along the main transportation route is the common characteristic of most towns in Madhes. Janakpur, however, has an identifiable centre: Over a century old Janaki Mandir built in Mughal-Rajputana style. All roads beginning from Parikrama Sadak that circumambulate the town lead towards the palatial shrine.

Commercial activities remain concentrated on what was known as Station Road and was named as Rajrishi Janak Path after it was mettled with Indian assistance in the late 1960s. Shops have also come up at Ramanand, Kadam, Murli and Shahid Chowks at four corners of Parikrama Sadak. But streets connecting Janak and Ram Temples with Janaki Mandir are still places that attract pilgrims to their shops.

For the Ramanandi sect of Vaishnav Hindus, Janakpur is a Dham—a place of pilgrimage where the very soil is sacred—and that remained the primary identity of the town till the early 1960s. Waterbodies were clean. Mango orchards dominated the landscape. Then the Russians built the cigarette factory and workers from surrounding villages poured into the sleepy town to make a living. Overnight it acquired the identity of an industrial center.

At about the same time, airport connected the place with Kathmandu, which meant that it was no longer a punishment posting for well-connected technocrats and ambitious bureaucrats. By the 1970s, it had become an important node of the development industry. Janakpur Agriculture Development Project, bankrolled by the Japanese, was a giant scheme that employed hundreds of people. Its achievements are some of the best kept secrets of the Panchayat era. Agriculture dependent upon vagaries of monsoon is unlikely to be developed with good intentions alone.

After Dham, the budding industrial town and an evolving service centre, Janakpur emerged as an activist hub of oppositional politics once again in the wake of Referendum and its ramifications on the system of governance in the early 1980s. Philanthropic physician Laxmi Narayan Jha was one of the first reported persons to be ‘forcibly disappeared’ by the state that received international attention. His whereabouts remain unknown to this date.

The movement of 1990 established the credential of the town as a beacon of hope. Outside of Kathmandu, neighborhood of Janakpur had to suffer most at the hands of repressive government. After the restoration of multiparty democracy, it became a bastion of Nepali Congress once again.

Mired in power struggle, the NC government failed to live up to its promise. If the government of the 1990s can be remembered for its only one ‘contribution’ to the social economy of Madhes, it has to be its decision to begin issuing passports from district administration offices. The facility sent manpower agents scurrying to the countryside in search of young men willing to work for a pittance in West Asia to escape the grinding poverty of their villages. After the Gallawals of Chandra and Juddha Shamsher that had denuded the hills and mountains of Nepal of their able-bodied young boys, the exodus of human capital in early noughties from Madhes needs to be counted as the third most important event that transformed the social dynamics of the country.

Political economy can’t remain unaffected by the changes in social relations. Barring honorable exceptions, the so-called upper castes of Madhes—the Badaka Lok of Kayasthas, Brahmans, Bhumihars and Rajputs—had made peace with the reality of Panchayat. It wasn’t very difficult for them to change loyalties and become bigwigs of political parties after the restoration of democracy in 1990. The moneyed middle castes of Yadavs and Sahs were energetically wooed into party folds. Maoists mobilized the downtrodden across caste division. Denied space in existing political parties, the newly empowered beneficiaries of remittance began to look for a platform to raise their voice. The political economy of remittances galvanized the newly empowered and Madhes Uprisings capitalized their rage to its advantage.

Even though he would later emerge as one of the biggest beneficiaries of First and Second Madhes Uprisings, the first President Rambaran Yadav had derided protests in no uncertain terms from various public forums. He was right in recognizing the subtle anti-NC tone of Madhes activists. After all, Madhes had reposed its faith in NC but was denied dignity even under parliamentary democracy. But the reason he failed to recognize faces shouting slogans was different from his assessment that they were hired crowds ‘from across the border’. Since the good doctor had lived as a neighbor of Koiralas and Sharmas in the predominantly Pahadi neighborhood of Brahampuri, the demography of Janakpur has completely changed.

Earlier only landlords and moneylenders from villages built their townhouses in Janakpur. When land prices went up even in rural areas due to the remittance-generated cash flow, people with small landholdings began to sell their village property and migrate to towns for education of their children. It’s natural that old timers that grew up knowing every one that congregated around Janaki Mandir for evening stroll and political chitchat were unaware about the existence of a deracinated generation stalking newly developed Chowks and Toles in utter frustration. By 2008, the NC had lost its primacy in the public life of the town.

Failure of the Third Madhesh Uprising de-legitimized Madhesi parties to such an extent that most of them had to change their names. Of the two such major formations, one calls itself Federal Socialist Forum. The other one is more of a political umbrella of ambitious politicos but claims to be National Peoples’ Party. None of them can claim Janakpur as their stronghold. If at all, the town has acquired the distinction of being headquarters of self-rule activist CK Raut, who happens to swing between undeclared house arrests and ill-substantiate police custodies. In search of a new identity, the town is trying to revive its heritage in arts, culture and music.

The problem with cultural identity of Janakpur is the conflict between its role as the pivot of Madhes politics and centre of Mithila civilization. The ‘Wineglass Model’ of federalism has turned the State into just a thin stem that the PEON holds to take occasional sip at the federal level and put it down whenever necessary on the ground. Members of the state legislature habitually complain that Ward Chairpersons of rural municipalities have more authority and influence than they do.
The state government in Janakpur has responsibilities other than its own. As the legatee of the Madhes Uprisings, it has to live up to the expectations of Madhesis that don’t live within its territory. The onus of proving the viability of federalism as a principle of governance is also upon its frail and fragile shoulders. Little wonder, it looks towards art and culture for solace. All art, however, is quite useless as Oscar Wilde famously said.

Art for the sake of art is a doctrine dating back centuries. But when art is for its own sake, uselessness is perhaps inherent in the act. It then becomes a way of expression that generates compassion, empathy and reflection. In difficult times of identity crisis and loss of dignity, uselessness of art comes quite handy. Resolution of contested issues lies in the political domain. Arts help endure whatever the outcome and conserve energy for another struggle.

Art of wait and see

In the emerging Chinese view, any leverage or advantage the US has over China in trade is far exceeded by... Read More...