The last days of Netanyahu?

TEL AVIV – At long last, Israel has taken a step back from the religious nationalist abyss into which Prime Minister Binyamin Netanyahu had been leading it. In the September 17 parliamentary election, the country’s second in five months, the “natural coalition” of Netanyahu’s Likud party, Orthodox groups, and proto-fascist factions failed to reach the 61-seat threshold that would have enabled him to form another government.

For Netanyahu, who has spent 13 years in power, this election was only partly about his nationalist political project. His main aim was to reproduce the only coalition that could grant him parliamentary immunity from his imminent indictment on charges of fraud, bribery, and breach of trust. 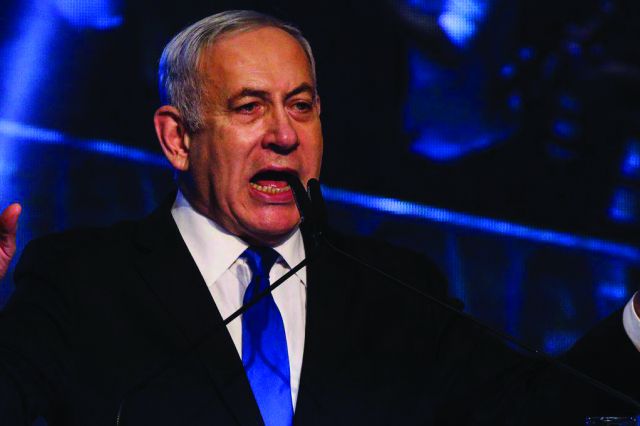 For starters, he recklessly pledged to annex the Jordan Valley—part of the West Bank—without any strategic assessment of the consequences. In addition, he proposed a bill that would have allowed Likud activists to place cameras in polling stations; when the bill failed to pass, Likud claimed that opposition parties were planning to steal the election. Meanwhile, the prime minister’s Facebook page warned supporters that Israeli Arabs “want to annihilate all of us.”

Furthermore, Netanyahu called on the public to boycott Israel’s most popular television channel for producing an “anti-Semitic” series on the kidnapping and murder of a Palestinian teenager by Jewish extremists in 2014. In reality, he was attempting to stop the channel from airing leaked material pertaining to the criminal investigation against him.

In his desperation to be re-elected, Netanyahu also irresponsibly fanned regional tensions in order to bolster his reputation as “Mr. Security.” Israeli attacks against Iranian targets in Syria and Iraq suddenly increased exponentially amid a blaze of media publicity (against the advice of the military, which has always counseled opacity in such matters).

More audaciously still, Netanyahu considered postponing the entire electoral process by starting an all-out war against Hamas in Gaza, which he had always been averse to doing. Thankfully, the army’s chief of general staff, Aviv Kohavi, and Attorney General Avichai Mandelblit blocked this initiative, arguing that Netanyahu could not initiate hostilities without following due legal procedure. Netanyahu spoke with Trump about a US-Israeli defense treaty, an absurd idea that the entire security establishment has always opposed for limiting Israel’s freedom of action.

Even if these parties did command a majority, it would take a dramatic act of political bravery for three former generals to form a government with an Arab party consisting of anti-Zionists and Islamist groups.

Yet excluding the Joint List from the coalition-building process would be an unpardonable blunder. These Arab parliamentary factions represent a genuine desire among Israel’s Arab minority—which comprises 20 percent of the population and is currently undergoing a momentous process of “Israelization”—to form part of an all-Israeli political project based on democratic governance and an end to the politics of xenophobia and incitement.

To complicate matters further, the key to breaking the post-election deadlock is Avigdor Lieberman’s Yisrael Beitenu party. A political cynic known for his anti-Arab outbursts and annexationist zeal—he himself lives in a West Bank settlement—Lieberman almost doubled the number of seats won by his party. He did so by pledging to enter only a grand national unity government with Likud and Blue and White, while excluding the Orthodox parties and the messianic far right. Blue and White eventually seconded Lieberman’s proposal, but with one crucial twist: it would not share power with an indicted Netanyahu.

The political battle will therefore now center on the key question in this election: Netanyahu, yes or no? Will Blue and White stand by its pledge? And will Likud members find the courage to unseat their leader (presumably an easier task now that his spell has clearly been broken)?
Israeli politicians’ ingenuity in circumventing their professed principles should never be underestimated. One way out of the impasse could indeed be Lieberman’s grand coalition, but with the premiership rotating between Gantz and Netanyahu: the former could head the new government for the first two years of its term, while Netanyahu deals with his legal problems. But this is only one of many creative options that might emerge in the coming days.

Clearly, this election is no victory for the Israeli peace camp, or even for the center-left. Whatever government emerges will not resuscitate the all-but-dead two-state solution, and will most likely launch a massive military campaign against Hamas in Gaza—something on which the two largest parties concur. It is also likely to engage with the United States regarding President Donald Trump’s “deal of the century” aimed at strengthening the Palestinian economy—a plan that the Palestinians are expected to ignore altogether.

Nonetheless, the election result comes as a relief, and one is right to sense a breath of fresh air. Israeli voters have stopped the country’s slide toward xenophobic theocracy (one hopes not just temporarily). Moreover, halting Netanyahu, with his imperial ways and his divisive politics of hate and incitement, was no small achievement.

Israel’s national poet Nathan Alterman might therefore have described the outcome as the “joy of the poor,” also the title of arguably his most famous work. But with the country again preoccupied with political bargaining, and regional tensions on the rise, it remains to be seen how long the elation will last—and whether Netanyahu really has left the political stage.

Shlomo Ben-Ami, a former Israeli foreign minister, is Vice President of the Toledo International Center for Peace. He is the author of Scars of War, Wounds of Peace: The Israeli-Arab Tragedy

TEL AVIV – Nobody should be surprised that US President Donald Trump’s Middle East peace proposal is heavily tilted toward... Read More...

NEW YORK – It has been nearly 60 years since the philosopher and historian Thomas Kuhn wrote his influential book... Read More...