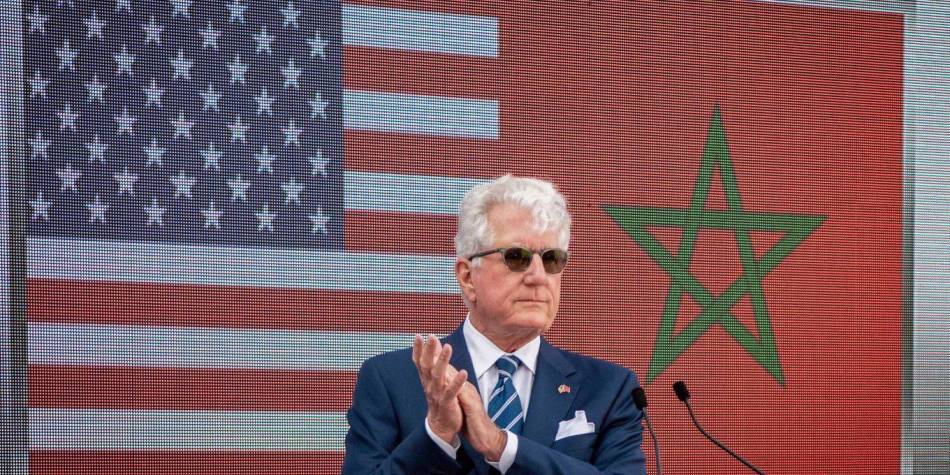 TEL AVIV – On December 11, then-President Donald Trump proclaimed that the United States would recognize Morocco’s sovereignty over the disputed Western Sahara, an apparent reward for the country’s decision to establish diplomatic relations with Israel. The move was swiftly condemned as a blatant violation of diplomatic norms. But, with his facile approach to protracted conflicts, Trump inadvertently made an important point: the emperor—the prevailing diplomatic approach—has no clothes.

To be sure, Trump has himself stood naked on the world stage, as when he claimed to have reached a breakthrough with North Korea or touted his administration’s implausible Middle East “peace proposal.” But none of his predecessors—in the US or elsewhere—resolved these conflicts either, despite adhering to revered diplomatic norms.

Those norms are inextricably linked to the liberal world order that emerged after World War II. The “responsibility to protect” (R2P) doctrine—the world’s commitment, adopted unanimously by the United Nations General Assembly in 2005, to protect populations from genocide, war crimes, ethnic cleansing, and crimes against humanity—exemplifies this liberal diplomacy.

But, in the last couple of decades, it has been all downhill for this vision. In Libya—the first case where the UN Security Council authorized a military intervention based on R2P—UN envoys come and go, but the country’s future is decided by foreign powers acting unilaterally. And, with the Security Council deadlocked, R2P hasn’t been invoked to justifty military intervention since, despite several notable mass atrocities perpetrated by people’s own governments.

The repeated failure of the UN’s collective security system can be partly attributed to the decline of the liberal world order itself. Long before Trump, America had become increasingly reluctant to act as the order’s guarantor (in Libya, President Barack Obama vowed that the US would “lead from behind”). Add to this Russia’s aggressive revisionism, China’s abandonment of its “peaceful rise,” and the European Union’s preoccupation with its own survival.

But many of the world’s biggest diplomatic challenges—from the Israeli-Palestinian conflict to the dispute over Western Sahara—predate these factors. Even at its peak, liberal diplomacy could not resolve them, not least because it too often treated statecraft as an expressive art, detached from an ever-changing reality.

Consider the fight over Western Sahara—Africa’s longest-running territorial dispute. In 1975, with Spain poised to cede control of the territory, the International Court of Justice rejected Morocco’s claim to it, and ruled that the local people, the Sahrawis, were entitled to self-determination. But Morocco quickly invaded and annexed the territory.

Since then, the situation has changed drastically. Western Sahara is one of the most sparsely populated territories in the world, with only about 70,000 inhabitants in 1975, and perhaps 550,000 today, living in an area half the size of Spain. Two-thirds of the population are Moroccans, many having moved there after annexation.

In this context, the case for Western Sahara’s self-determination is dubious. A more appropriate approach, which reflects the reality on the ground, is to grant Western Sahara autonomy within the Kingdom of Morocco—exactly the plan endorsed by Trump. (In 2013, Obama backed the same approach in a joint statement with Morocco’s King Muhammed VI.)

Securing political control of an occupied territory by changing its demography is nothing new. Some 600,000 Israelis now live in the West Bank, alongside 2,750,000 Palestinians. Iran has been repopulating vast areas of Syria with Shia Muslims. Nearly 46 years after Turkey invaded Northern Cyprus, settlers from mainland Turkey comprise about half the territory’s population.

Such behavior should never be endorsed. But pretending it is not happening will not help, either. When actors are in a protracted state of diplomatic limbo, disregard for the actual balance of power or the duration of the conflict perpetuates a fait accompli favoring the stronger side. This is as true of the Morocco-Western Sahara dispute as it is about the Israeli-Palestinian conflict, where infatuation with the deceptive two-state paradigm has made peace all but impossible.

In fact, when Arab states have rejected deals with Israel, they have usually ended up with less. The Palestinians did this on at least two occasions. Likewise, Syria is worse off for rejecting Israel’s offer in 2000 to return the Golan Heights: In 2019, the Trump administration officially recognized Israeli sovereignty.

While Trump’s move was unjustifiable under international law (even if one believes Israel was justified in its use of force during the Six-Day War in 1967), there is no denying that the prolonged failure of liberal diplomacy made it possible. And it is part of a larger pattern of unilateral annexations.

For example, the recent eruption of the decades-old conflict between Armenia and Azerbaijan over the enclave of Nagorno-Karabakh ended with a Russia-brokered deal that legitimized Azerbaijan’s annexation of a significant amount of territory. Russian peacekeeping forces were dispatched to enforce the deal. The UN was nowhere to be found.

Trump has much to answer for, diplomatically and otherwise. But the fact is that the diplomatic norms he disregarded weren’t producing results in many of the world’s longest-running conflicts. And, as reckless as his actions often were, they could well bring about progress on seemingly intractable conflicts—most notably, the century-old Arab-Israeli conflict.

After all, because of Trump, Morocco, Bahrain, the United Arab Emirates, and Sudan have joined Egypt and Jordan in normalizing relations with Israel. (Trump offered Indonesia billions of dollars in aid to do the same, but the country rejected the deal.) Trump also brokered peace among Arab rivals in the Gulf seeking to counter Qatar’s deepening relations with Iran and Turkey.

While President Joe Biden is right to reject many aspects of Trump’s toxic presidency, he would do well to safeguard its few achievements. But for liberal diplomacy to be revived, a reinvigorated transatlantic alliance—with a far more cohesive EU acquiring the hard power it now lacks—is vitally important.