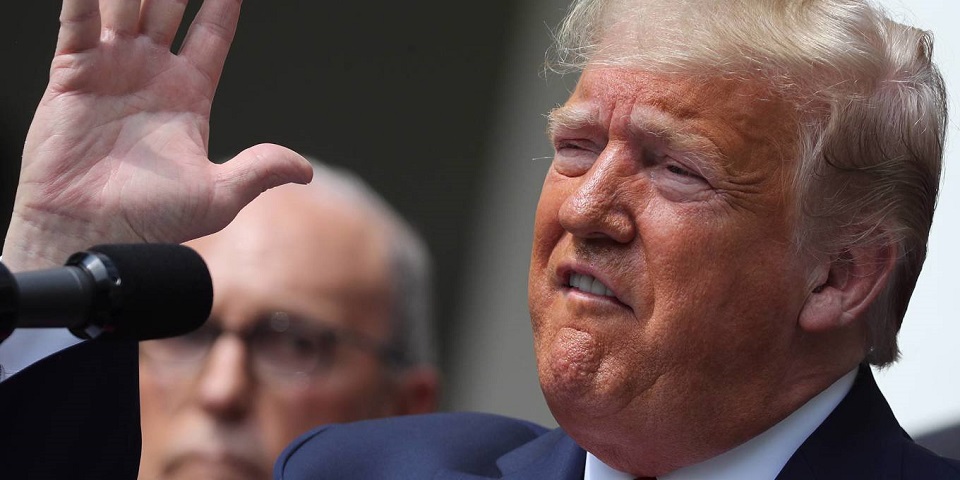 No power can defeat the US economically, technologically, or militarily. But, by re-electing Trump, Americans could severely undermine their own interests and propel the world toward an ever-bleaker future.

HONG KONG – Former US National Security Adviser John Bolton’s new book The Room Where It Happened bills itself as “the most comprehensive and substantial account” of President Donald Trump’s administration. And, indeed, it has quickly become a critical resource for those seeking to understand Trump. But, despite Bolton’s juicy revelations about Trump’s conduct of foreign policy (which his administration tried in vain to keep off bookshelves), the book does little to answer the fundamental question facing the US: Is its current foreign-policy muddle Trump’s fault, or the result of something deeper and more structural?

There is no doubt that Trump’s leadership is problematic, even dangerous. A longtime Washington insider, Bolton assumed that, as national security adviser, he would be responsible for ensuring that the president “understood what options were open to him for any given decision,” and that the decision would then be “carried out by the pertinent bureaucracies.”

But Trump was not interested in an orderly calculation of policy priorities and trade-offs. Nor was he much interested in policy implementation. Managing the different agendas, interests, and egos of America’s complex bureaucratic machinery—including the State Department, the Pentagon, the Treasury, and intelligence agencies—is barely on his radar.

Trump’s own ego—inextricably linked to his re-election—was all that mattered, according to Bolton, to the point that he was willing to make what Bolton considered imprudent deals with other countries just to claim a victory. Eventually, Bolton writes, he couldn’t take it anymore and resigned. (Trump still insists that he fired Bolton.)

Trump’s temperamental, transactional approach to foreign affairs – which has included praising dictators, withdrawing from multilateral agreements, and tweeting wild threats whenever he has felt cornered – has caused considerable confusion among America’s allies and rivals alike (not to mention US officials and bureaucrats). Not surprisingly, it has severely undermined America’s standing on the world stage.

Yet America’s global standing was weakening long before Trump arrived. Its position as a superpower depends on its economic influence, technological prowess, financial dominance, and military might. But its interest in—and approach to—global leadership has always been shaped by its self-perception as a moral authority, bearing universal values that others should adopt as their own.

The problem, which the geostrategist George Friedman has pointed out, is that “most nations don’t adhere to American moral standards.” That is certainly true of China, which has its own set of values and priorities. This divergence has contributed substantially to the conclusion in the US that China is the country’s main strategic rival.

That notion has wide bipartisan support in the US. In fact, Trump’s Democratic predecessor, Barack Obama, also sought to shift America’s strategic focus toward managing China’s rise—albeit far less combatively than Trump—but was thwarted by continued upheaval in the Middle East.

As Richard N. Haass has argued, Trump’s presidency has been marked by divisions not so much on whether to pivot toward the Pacific, withdraw from the Middle East morass, or rethink relations with Russia, but on how to do so. Still, Trump’s highly divisive, antagonistic style has all but precluded any consensus, particularly with regard to China. What is left is a knee-jerk repudiation of all things Chinese.

Escaping this muddle will not be easy. America’s global standing depends on a strong economy. And yet the COVID-19 pandemic has caused some 40 million Americans to file for unemployment benefits, and the Federal Reserve projects that many will remain out of work for a prolonged period. It does not help that long-simmering social divisions are boiling over, exemplified by widespread protests over systemic racism and police violence.

Americans and their leaders are now increasingly fixated on domestic challenges. As a result, Haass notes, “much is happening in the world that calls out for American attention and is not getting it.”

For one thing, as long as COVID-19 survives anywhere, countries that have eliminated it will continue to suffer from additional waves of infection. Yet the US has been unable to manage the crisis at home: more than 120,000 Americans have died, and cases continue to rise at a rate of over 25,000 per day.

The US cannot recapture the hegemonic global leadership of the past, and it shouldn’t try. The world is shifting toward a multipolar order, in which, as Harvard’s Joseph S. Nye has explained, power is diffused among multiple nation-states, multinational corporations, non-state actors, and diverse communities (in terms of race, gender, religion, and culture). At the same time, challenges are becoming increasingly global in nature, with the pandemic being a case in point.

For the US, the rational response would be to lead a cooperative effort to address shared challenges, including the looming recession, technological disruption, and climate change. For this to work, all stakeholders—including US rivals like China, Russia, and Iran—must be involved.

Trump has proved himself to be anything but rational. But longstanding and bipartisan pretensions of moral exceptionalism, the perception of China as a strategic competitor, rising domestic concerns, and a lack of policy clarity suggest that, even if he is voted out in November, the US-led cooperation the world needs will not soon emerge.

Nonetheless, as Bolton’s book makes plain, Trump remains uniquely ill-suited to national, much less global, leadership. As the US approaches its next presidential election, voters should recall President Dwight D. Eisenhower’s famous assertion that “only Americans can ever hurt America.” No power—not even China or Russia—can defeat the US economically, technologically, or militarily. But, by re-electing Trump, Americans could severely undermine their own interests and propel the world toward an ever-bleaker future.

LONDON – I recently re-read and reflected on everything I have written for Project Syndicate since the start of this... Read More...

Nepal’s Experience with the UN
16 hours ago

Melamchi water should also be delivered to areas outside KMC: Pradeep Paudel
8 hours ago