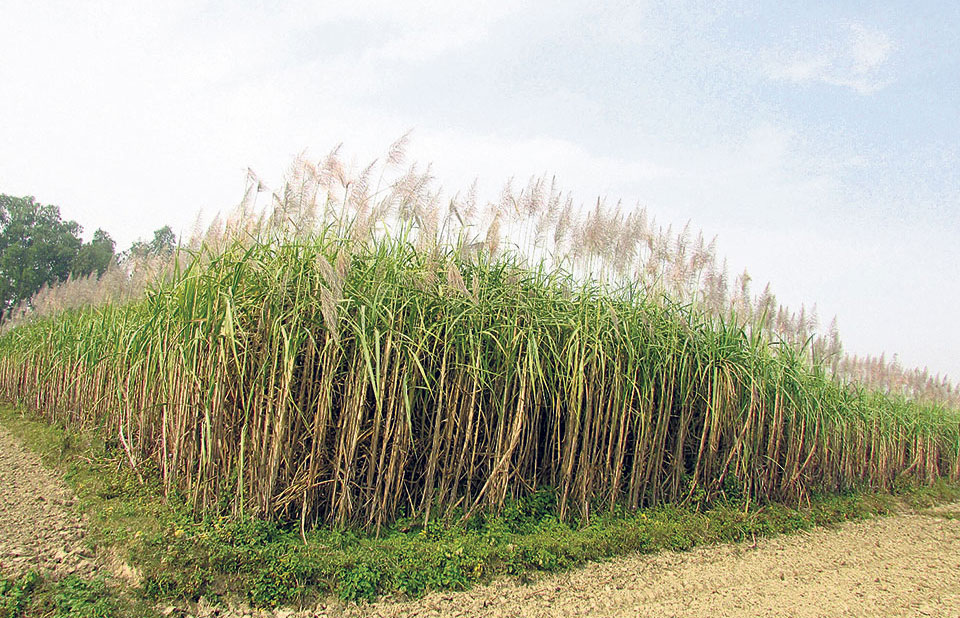 BUTWAL, May 27: Sugarcane farmers in Nawalparasi are extremely worried, anticipating a huge loss this year as well. Had the government been able to sort out the 'bargaining game' between farmers and traders and fixed the price of sugarcane on time, this situation would not have arrived.

"Every time what happens is the price is fixed too late. When the crop starts drying up, we come under pressure to sell it for any amount. That is what the traders want," said Dudhnath Gupta, a farmer from Pratappur, who has not yet received the payment of last year from the traders. "The policy of the government is not understandable. Whether it wants to kill the farmers or save them."

For the ease of farmers, the government should have fixed the price of sugarcane some time before the harvesting season. However, while sugarcane in the plains is harvested from December to February, the price was fixed – Rs 536 per quintal - just this time around. Farmers state that the delay in fixing the price puts them at the receiving end, forcing them to accept the high-handedness of the traders.

"Even though that rate has been fixed by the government, we may not get that rate as the traders still bargain with us," Gupta said.

The lack of management of the sugar industry is evident from the fact that four sugar mills in Nawalparasi alone have been closed in recent years. And the situation is getting worse every year.

"I am in a dilemma over giving continuity to sugarcane farming. There is always a loss," said Bachha Bhar, another farmer from Susta Rural Municipality.

Meanwhile, Durga Chaturvedi, marketing chief of Indira Sugar Mill, Pratappur, stated that the domestic production of sugar will go down this year. "The mills started operating late and also, the sugarcane has dried up in the field," he said. "From one quintal of sugarcane, around nine kilograms of sugar can be produced normally. This time, it's not going to be more than seven kilograms," he added.

Chaturvedi said that the production has gone down by nearly 35 percent this year.

KATHMANDU, Jan 3: Sugarcane is crushed to make sugar that sweetens our mouth. But the difficulties that sugarcane farmers in... Read More...

KATHMANDU, Feb 19: Sugarcane farmers from three districts – Sarlahi, Rautahat, and Mahottari – have gathered in Hariaun of Sarlahi to... Read More...