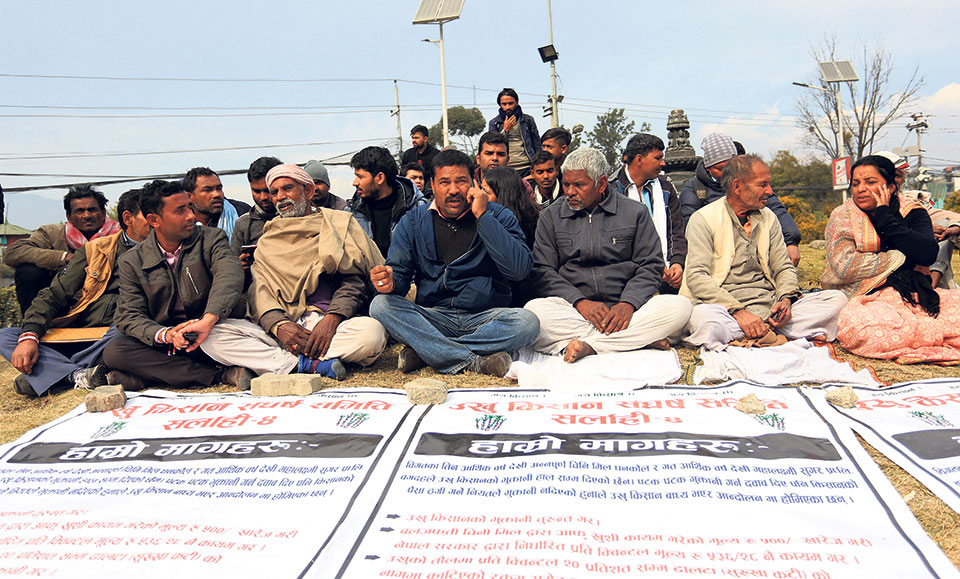 Sugarcane farmers from Sarlahi district and their supporters protest at the Maitighar Mandala in Kathmandu on Thursday. Photo: Dipesh Shrestha/Republica

Denied payment for years, cane growers took to the streets in Kathmandu to make their demands heard

KATHMANDU, Jan 3: Sugarcane is crushed to make sugar that sweetens our mouth. But the difficulties that sugarcane farmers in Nepal have had these last few years speak in volumes about their bitter struggle.

The sugarcane producing farmers in various parts of tarai districts are left unpaid for years for their harvest sold to the sugar mills, forcing them to stage sit-in at the Maitighar Mandala in the heart of the capital for the past few weeks.

Each season, they harvested sugarcane and sold to the sugar mill. But, these unscrupulous sugar mill owners delayed payments despite numerous follow ups for the same.

Left with no other options, these disappointed farmers have taken to the streets in Kathmandu – coming all the way from their home districts Bara, Parsa, and Sarlahi, among others.

The plight these desperate farmers face today has a long story. They borrowed money from local money lenders for sugarcane plantation with a hope to pay back the loan after selling the harvest. They also dreamt of making some surplus money so that they could address the needs of their family.

But these hopes were dashed badly as mill owners would rarely pay the amount they owed to the farmers. The amount they owed in interest and principal continued accumulating, while their family lived under acute hardship for lack of money.

They started visiting district headquarters, met chief district officers (CDOs), district-level leaders and so-called influential people for help. But no help was forthcoming from them.

Then they left for Kathmandu – the federal capital city, where they had never been before – to continue their struggle. For the last two weeks, they have been organizing sit-in at the Maitighar Mandala.

One of them is Raudi Mahato of Sisautiya, Sarlahi. The 62-year-old has already caught cold. His eyes are swollen and feet ache terribly. His thin clothes hardly guard him in the chilling nights. But Mahato is determined to continue his struggle despite all these adversities. “Let’s not talk about cold. I won’t return home until I receive my outstanding payment,” said Mahato in a determined manner.

Living in Kathmandu is not easy for someone who does not have enough money or any relative here. “We don’t have anyone here. Some kind-hearted people have offered us refuge for the nights. Sometimes we have to live under the open sky,” shared Mahato.

The communist government with a comfortable majority is steering the nation. The party, which claims it is championing for the cause farmers and laborers, is now at the helm of the government. It is ironic that the same poor and marginalized people like sugarcane farmers are left to fend for themselves.

Mahato had taken two bigha of land on lease for sugarcane farming. His entire family is involved in farming. The Mahatos sold sugarcane to Annapurna Sugar Mills every year, but were left unpaid for three consecutive years.

Naive as he was, Mahato trusted his ‘Master’ only to be betrayed at the end. Annapurna Sugar Mills owes Mahato Rs 400,000. But it has been paying a petty sum of Rs 5,000-10,000 as if it is offering alms. After failing to receive the due amount, Mahato stopped planting sugarcane altogether from this year.

“What’s the use of sweating if you are not paid?” he asked.

The loan of Rs 200,000 he took for planting sugarcane is increasing at the rate of 36% per annum. This amount haunts him day and night, making him unable to even have sound sleep.

It’s not their will to launch a demonstration in this chilly weather when it is the time for wheat plantation. “What can we do? We have no option of being here to get our voices heard although we should have been busy in our fields these days,” said Mahato.

Many advised him to take up the issue to local level political leaders. At times, he also thought that it was a better option. But there was a problem. He did not know any political leader. “I sweat in the field, play with plow and tend to the crops. But why don’t I get the price of my sweat?” complained Mahato, who looked exhausted, feeble and desperate from inside.

Moneylenders keep exerting pressure on him to make immediate payments of the loan. “Sugar mill does not pay. But moneylenders keep asking for money. We have become like squatters,” he lamented.

Many farmers like Mahato had staged a hunger strike in the district headquarters previously. They were assured of payments and sent back home. They have been wandering this and that office asking for the price of their sweat. “We are finally here in Kathmandu. Hopefully, Kathmandu won’t turn a blind eye to our sufferings,” they say.

The farmers held talks with different government authorities and reached agreement at least four times with sugar mills for immediate release of their pending dues. But they were never paid.

The agitating farmers are demanding not only the outstanding payment, but also compensation for the delay.

Most of farmers in Sarlahi are yet to get payments for canes sold since 2013. Grants provided by the governments have not been deposited in their accounts either.

The government has fixed minimum support price for a quintal of sugarcane at Rs 536.56. Of the total amount, sugar mills should pay Rs 471.28 per quintal, while Rs 65.28 is to be paid by the government as subsidy.

Farmers are now demanding that they be paid within 15 days of the sale of sugarcane to the mill owners.