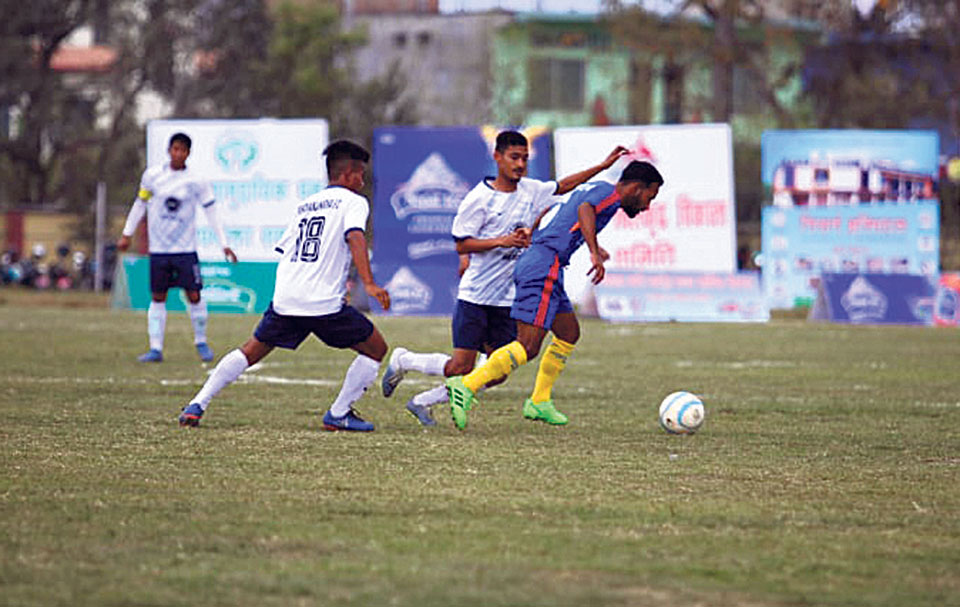 Thakuri opened the scoring spree in the 10th minute of the match after converting a well-timed pass from Uddab Khatri. Nine minutes after the first goal, visiting team goalie Nigam failed to collect a straight forward pass as home team striker Philip Tamang rushed on the opportunity to score a goal in an unguarded goal-post. It went bad to worse for the Indian team as Thakuri took advantage of dented confidence in defense, completing his brace after a 23rd minute goal. Kanchanjunga went down three goals.

However, the action-packed first half spiced up after Kanchanjunga returned two goals.

Sudur Paschim conceded a penalty after defender Dhan Bahadur Thapa committed a foul against Aamir Lama in the d-box area. Abhishek Dorji completed the goal in the 30th minute to inspire Kanchanjunga back in the match.

The Indian side’s head coach introduced an early substitute as the move was rewarded imminently as Kanchanjunga pulled back a second goal nine minutes after the penalty. Tshering Tamang smashed a goal in the 39th minute to finish the first half on 3-2.

Kanchanjunga went into break with a renowned energy. However, any hopes of a miraculous comeback was ended in the first minute of the second half as Dipesh Shrestha completed a calm finish against Kanchanjunga goal-keeper one-on-one to make the score 4-2. The scoreline remained as it is by the end of the match as Sudur Paschim reached the semifinal of the prestigious Khaptad Cup. Kanchanjunga coach Dinkar Chhetri rued conceding two early goals as the main reason of the defeat.

“We gifted the second and third goals in the first half. We played poorly in the starting minutes of the match which cost us the match. We were pumped going into the second half. We had plenty of opportunities throughout the match but failed to convert any. Credit to Sudur Paschim team for making most of the available opportunities.”

“We struggled for right balance but early goals helped us gain the advantage. Players worked hard to secure the win.”

Bhandari is sweating on the fitness of Sudur Pachim first choice goal-keepers who are struggling with fitness.

“We have four days until the semifinal match. Hopefully, it will be enough for our players to recover and our first two goal-keepers to get fit by the match.”

Sudur Paschim will face the winner of the match between departmental teams Nepal Police Club and Armed Police Force Club.  Three Star Club and Nava Jagruti Club will face in the second quarter-final match on Wednesday.