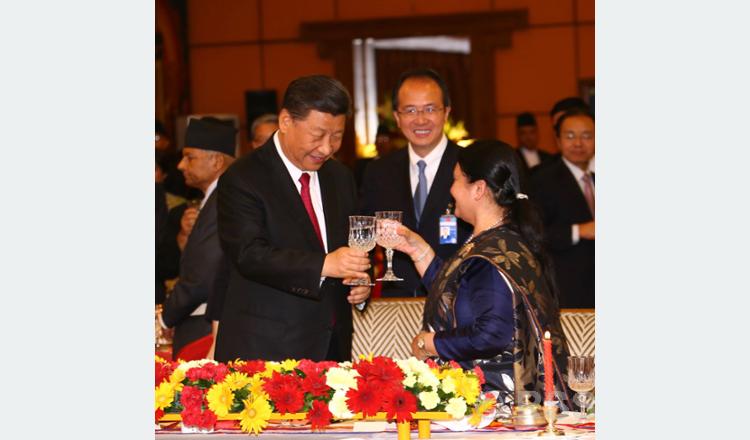 KATHMANDU, Oct 13: Chinese President Xi Jinping’s visit to Nepal, 23 years after the last visit by a Chinese President, has kept social media users busy for weeks. Opinions of the general public, as well as experts started flooding as the government started preparing for President Xi’s visit.

Positive comments and best wishes for the meeting between leaders of the two neighboring nations have been trending on social media platforms like Twitter and Facebook. Some commoners, however, expressed grievances towards the Nepal government.

The posted opinions and grievances in Facebook and Twitter show the people’s concern. The concern is about the government’s ‘overnight development approach’ to appease President Xi and the lack of concern toward the sufferings of the general public.

Foreign Affairs Minister Pradeep Gyawali welcomed President Xi even before the latter could land at the Tribhuvan International Airport.

“Nepal, the land of Buddha and Sagarmatha, looks forward to warmly welcome the VVIP guest His Excellency Mr. Xi Jinping, President of the People’s Republic of China,” Minister Gyawali wrote on Twitter.

Pro-visit supporters applauded the government efforts. While most politicians and general public praised Xi’s visit to Nepal and were quick to welcome him in Nepal, some were critical too.

Senior journalist Kishore Nepal expressed his dissatisfaction over the tightened security surveillance during the visit. “I will not step out on the day of His Excellency Xi Jinping’s visit. Good roads or newly planted flowers in the streets. I urge you not to get out of your homes too,” he wrote on Twitter.

Bhimarjun Acharya, a constitutional lawyer was unhappy over the government’s move to focus on repairing roads and cosmetic beautification just ahead of the visit of an important guest. Citing the example of the dilapidated condition of Chabahil-Jorpati road section Acharya stressed the need for working for the betterment of the public as well.

“Development work to welcome VVIP guests coming from rich countries are completed overnight but why isn’t the same done on the normal circumstance for the general public?” he questioned.

KATHMANDU, June 8: A recent survey has found that only one in a hundred Nepalis trusts the social media platforms. ... Read More...

KATHMANDU, May 5: The high-level government committee formed to prevent and contain the novel coronavirus disease (COVID-19) has recommended to... Read More...