Six-lane Birgunj-Pathlaiya road to be ready by mid-July 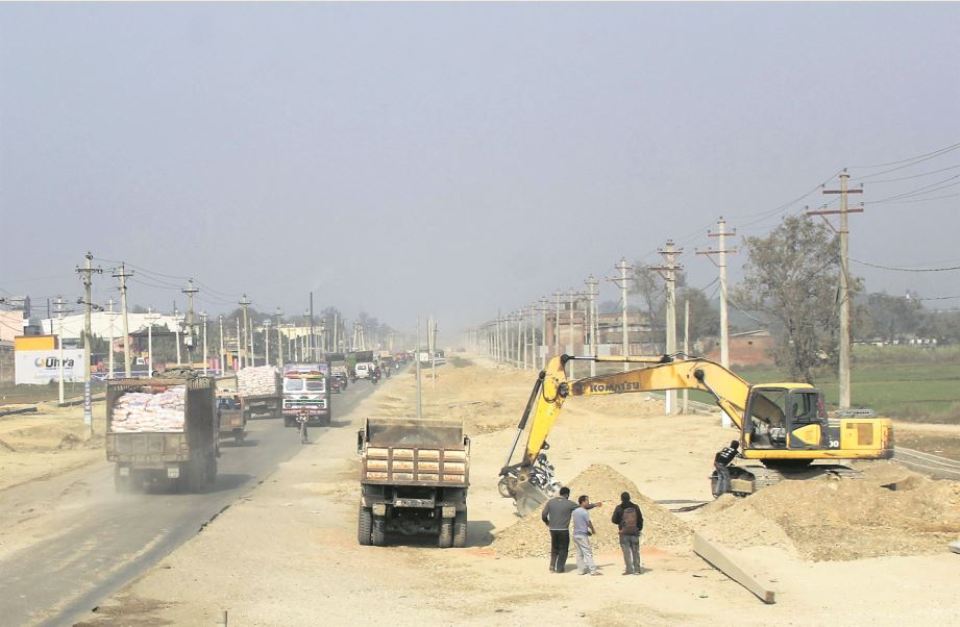 BIRGUNJ, Jan 14: The six-lane Birgunj-Pathlaiya Road still remains incomplete even though it has already been one and half months since the construction deadline expired.

The delay in completion of this road, which handles most of the country's imports and exports, has affected industrialists, traders, transport entrepreneurs and general public alike. The Pathlaiya-based office of the project, however, says that the project will be completed by mid-July.

The road project was divided into six sections and awarded to separate contractors to ensure its timely completion. However, the project has achieved only 60% work progress so far, according to the Ashok Yadav, an engineer with the Pathlaiya-based office of the project.

Upon completion, there will be three lanes of three meters each on both sides with a median flower bed. Similarly, there will be five-meter service lane on each side of the road. As the road will be 50 meters wide, local industrialists say it will give a new identity to Birgunj.

"Not only for Birgunj, this is an important road project for the entire country," Subodh Gupta, senior

Vice-president of Birgunj Chamber of Commerce and Industries, said. "We all hope that the road becomes ready at the earliest."

Contracts of the six sections were awarded on October 16, 2016. The project office had given the contractors two years to complete the project. Going by the initial deadline, the project had to be completed by October, 2018. But the project still remains incomplete. According to the project office, various factors affected construction work.

The six-lane road connects Integrated Check Post (ICP) of Birgunj with Pathlaiya. It is 28 kilometers long. The road is of strategic importance as it connects Birgunj customs, Birgunj dry port and Parsa-Bara industrial corridor with other parts of the country.

According to Yadav, construction work will gain pace as right of way of the project has already been cleared. The project had faced difficulty in getting permission to cut trees as a section of the road between Pathlaiya and Simara falls under Parsa National Park.

Similarly, the project had to lobby hard to convince the Nepal Electricity Authority (NEA) to remove electricity poles. "As all these preparatory things have been completed, construction will progress smoothly," he added.

Other components of the project, four-lane Parwanipur Gandak canal road and construction of bridges, have also been progressing smoothly, according to Yadav.

KATHMANDU, May 24: The Standing committee has been still incomplete due to delay in picking memmbers from the former party CPN (Maoist center) by Communist... Read More...

JAJARKOT, Feb 12: Construction work on Mid-Hills Highway in Jajarkot district is not moving ahead because of the lackluster attitude of... Read More...