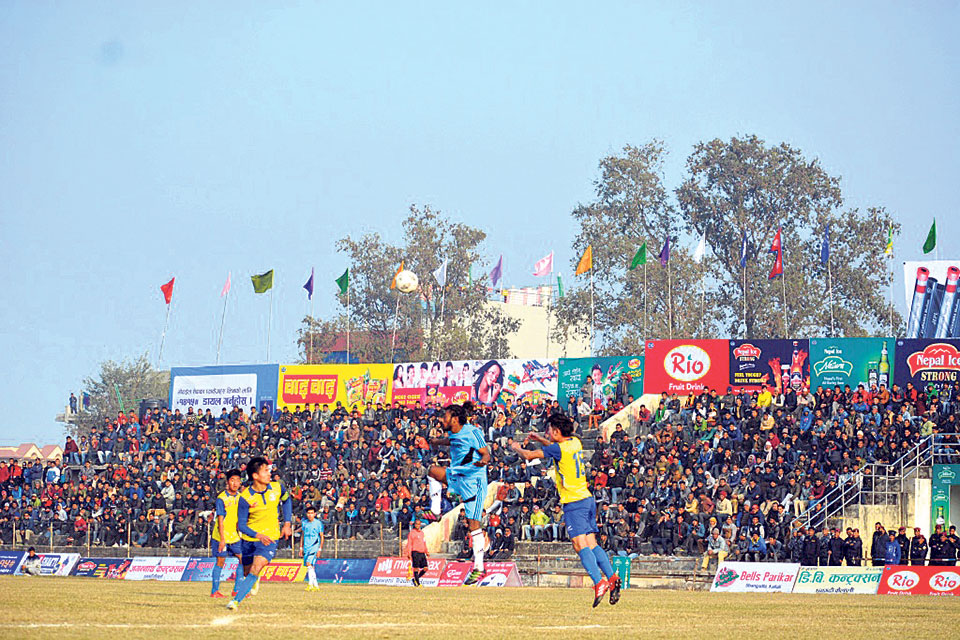 Players of Rupandehi XI and Druk Star Youth Club of Bhutan (yellow) in action during the Far-western Khaptad Gold Cup football tournament at the Dhangadhi Stadium in Dhangadhi on Tuesday. Photo: Republica

At the Dhangadhi Stadium, Rupandehi beat Druk Star 3-2. Druk Star, who played its first match of the tournament, failed to qualify to the last eight after missing a penalty in the last minute of the match.

Rupandehi will take on defending champion Laxmi Hyundai Manang Marshyangdi Club (MMC) in the quarterfinals on Friday. MMC directly entered into the last eight of the 12-team tournament from the last 16 matches.

Amar Dangol had given Rupandehi the lead in the 22nd minute with a beautiful goal, and Dangol extended Rupandehi’s lead seven minutes before the end of the first half.

Bhutanese player Kriyanga Rabgaya pulled one back for the visiting team utilizing the opponent’s mistake in the 58th minute. But, Manish Thapa raised the score to 3-1 in the 69th minute of the match.

Druk Star had a lot of chances to score in the second half, especially the one in the last minute of the match. But, it failed to score from the spot and was knocked out of the tournament. The referee awarded Druk Star a penalty after Rupandehi’s Gautam Shrestha fouled Druk Star’s forward. Rupandehi’s goalkeeper Sojit Gurung saved Kejang Wangdi’s penalty and sent his team to the quarterfinals.

Yeshi Dorji’s goal in the second minute of injury time was not enough for Druk Star to even equalize the match.

Dangol, who scored a brace, was declared the man-of-the-match. He was rewarded with Rs 10,000 for his contribution in the win.

Druk Star’s head coach Kota Namge said that despite bringing in a comparatively stronger team than the last year, his team could not get the result.

“We brought a stronger team than the last year, but the players failed to play well. We presented an improved performance in the second half, and had pressurized them accordingly, but we could not score,” Namge said. “The team consisted of Bhutan’s national team players, but we lost the match after failing to play to our standards.’’

A Bhutanese team had won a match in the first edition of the tournament last year. The team had beaten West Kathmandu 4-1 in its first match, but lost 2-0 to MMC, who went on to win the title.

Rupandehi’s head coach Dayaram Sapkota said that he was satisfied with the win though his team did not play to their best standards.

“We have good players in our team, but no one was able to play their best game. Victory is important for a team and we were able to get that, but today’s performance was only average,” Sapkota said. “Our goalkeeper’s mistake led to conceding those two goals and we will not have the freedom to make mistakes like this in the upcoming match. We will improve our performance in the next match.’’

'Smart lockdown' to be enforced, int’l flights to resume
13 hours ago

It is difficult to run hotels according to the prevailing policy: HAN
16 hours ago

'Smart lockdown' to be enforced, int’l flights to resume
13 hours ago

Chitwan extends prohibitory order for a week
14 hours ago

It is difficult to run hotels according to the prevailing policy: HAN
16 hours ago