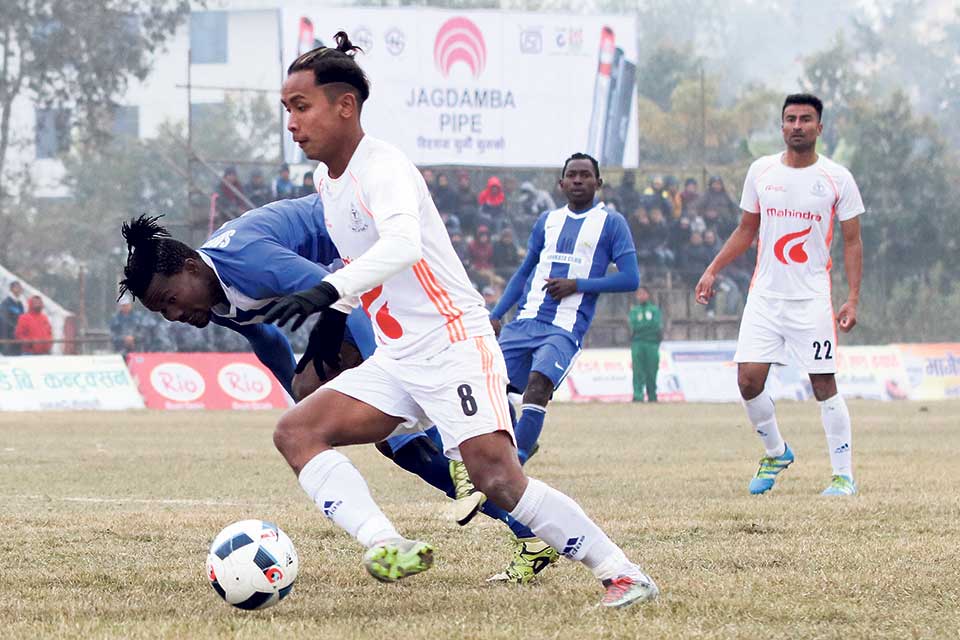 Bista scored the opening goal in the 23rd minute and added his second goal in the 85th minute of the match played at the Dhangadhi Stadium, Kailali. Bista was declared the man-of-the-match for his contribution and was rewarded with Rs 10,000. The APF will now face the host Far-western XI Sports Club in the semifinals. The host had beaten Chyasal Youth Club in the penalty shootout to reach the quarterfinals.

Bista scored the first goal from a header after Shyam Nepali’s cross was misjudged by Yuvaj Khadka of Sankata.

Bista helped APF get an easy win over Sankata in the match where both the teams failed to convert their chances into goals. He scored a solo goal to bag his brace.

Head coach of APF Ratna Kaji Maharjan claimed that his players are doing good and the team was in a position of winning the title as the performance has improved from the last match.

“We got a better knowledge of the pitch now, so we played better than the first match,’’ Maharjan said. “The boys kept the opponent under pressure consistently from the start as they played very well.’’

He added that his players didn’t give Sankata any opportunity to make a comeback in the match. “We are now focused on reaching the final of the tournament by defeating the host. This time, we are eyeing the title.’’

APF had earlier defeated Sahara Football Club of Pokhara in the penalty shootout as the match ended in a goalless draw in the regulated time.

Sankata’s head coach Salyan Khadgi attributed his players’ failure to convert the chances into goals for their failure.

“The boys looked so tired and we could not present a good game. We could not utilize the chances despite getting many in front of the goal,’’ Khadgi said. “APF is a consistently successful team in Nepali football and they scored the first goal playing really well in comparison to their previous match. We could not play like our last match. They showed a very good spirit in the first half, but we could not score despite creating many chances in the second.’’

Sankata Club, which is the runner-up, made it to the last eight by defeating Dharan Football Club in the penalty shootout. They were defeated 3-0 in the final by Manang Marshyangdi Club (MMC) last year.

The other departmental team Tribhuvan Army Club (TAC) and Ruslan Three Star Club (TSC) will vie against each other in the third quarterfinal match on Thursday.