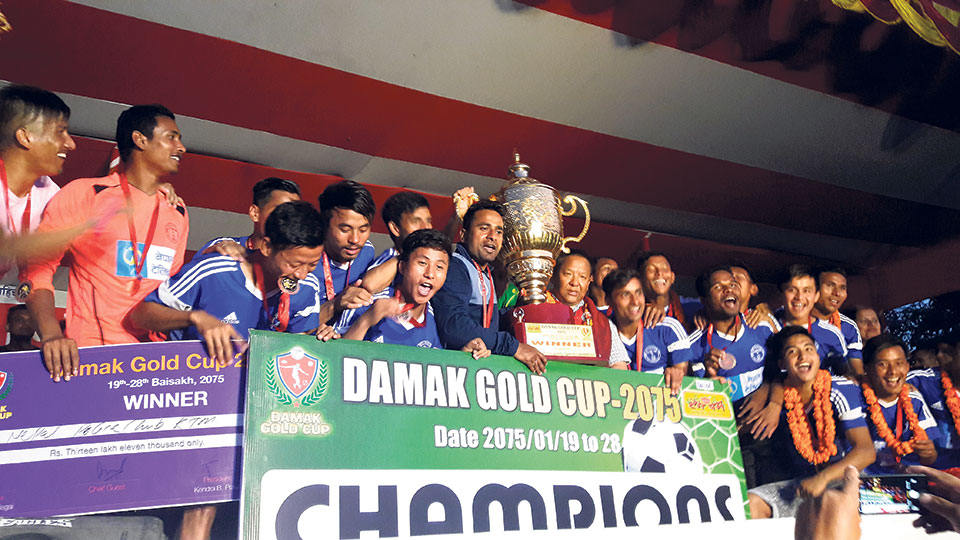 Members of Nepal Police Club pose with the trophy after defeating Manang Marshyangdi Club in the final of the Damak Gold Cup football tournament in Jhapa on Friday. (Yubaraj Bibas/Republica)

Rejin Subba scored the decisive goal of the final match. Subba converted Ravi Paswan’s pass into the goal at the end of the second half.

Nepal Police Club had defeated departmental team Armed Police Force to secure their place in the final. Nir Kumar Rai’s solo goal helped Nepal Police reach into the Damak Gold Cup final achieving a 1-0 win over the opposition in the first semifinal match. Laxmi Hyundai Manang Marshyangdi Club defeated departmental team Tribhuvan Army Club on penalties in a semifinal match on Wednesday to secure berths for the final clash with the other departmental team Nepal Police Club. The match ended in a 1-1 draw as both teams headed to intense penalty shootouts, where Manang Marshyangdi came out on top with 5-4 score line.

NRB introduces new Rs 1,000 note which can be identified by visually-impaired
23 hours ago