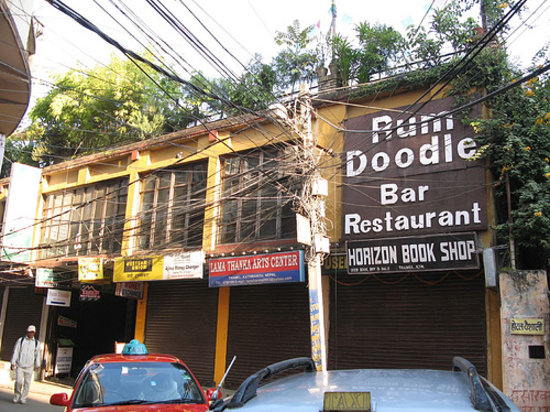 Some may find it hard to believe that no Everest expedition is complete without a meal at a restaurant in Thamel. Mountaineers either start their expedition by dining here, or celebrate their success after the ascent by drinking and making merry here. The place we are talking about is no other than Rum Doodle Bar and Restaurant at Thamel.

According to Ashok Pokharel, Managing Director of Rum Doodle, the place was opened in the year 1979 by his father Tek Chandra Pokharel. “Rum Doodle was opened as a dining place for trekkers and mountaineers as there were not many decent eateries for them back then in Kathmandu,” says Pokharel.

The restaurant is heavily influenced by the book ‘The Ascent of Rum Doodle’. The book written by W E Bowman in the year 1956 has a fictional account of a group of mountaineers’ ascent of a fictional 40,000 and ½ feet mountain Rum Doodle. As the book was popular among mountaineers globally, the name Rum Doodle attracted many visitors at the restaurant. The place soon became popular among mountaineers who had returned from their expeditions and were craving for a handsome meal. Eventually, the place became famous as a meeting point of trekkers and mountaineers, and specially Everest summiteers.

Today, Rum Doodle boasts decades long tales of adventure. The restaurant has six big boards filled with the signatures of Everest summiteers, making it the biggest collection of such signatures in the world. “Sir Edmund Hilary visited Rum Doodle in 1980. We took his signature in a board and soon it grew to be this great collection that we have now,” says Pokharel. Apart from numerous Everest summiteers, other distinguished guests at Rum Doodle were former US president Jimmy Carter and former Japanese President Ryutaro Hashimoto.

The restaurant spreads in 2 floors and 2 terraces and is big enough to cater to 260 diners at once. The setup of the restaurant is plain and simple, with wooden chairs and tables and fireplace in both the floors. The restaurant serves Italian, Continental and Indian cuisine. The place is famous for its filling steaks and wood fired pizzas. Rum Doodle steak is one of the most popular delicacies here. Steak marinated with spices in olive oil is grilled and served topped with red wine sauce. Not to miss here is Chicken Tandoori Pizza, one of the specialty dishes here at Rum Doodle.

Other gourmet varieties here include Chicken Stroganoff, Chicken A la’ Kiev, Crispy Prawn in spicy tomato sauce and Classic Kung Pao Chicken. Besides, numerous variations of soups, salads, pastas, steaks and other grilled dishes can be savoured here. Apple pie with ice cream and chocolate brownies are some of the available desserts. The three bars of Rum Doodle maintain the flow of spirits. The bars serve all local and imported spirits and wines along with classic and signature cocktails.

Though the menu here is quite impressive, food and drink alone is not the strongest of reasons to visit Rum Doodle. It’s may be because everything else seems to be overpowered by the age old history of adventure that the place holds. Rum Doodle definitely serves as a place for strong hearts to meet, to tell their tales and share the spirit of adventure.

From the traditional Khapses to the intricate pizzas, one can find an assortment of dishes that justify their culinary preferences.... Read More...

In pics: People celebrate Gaijatra in Sankhu
59 minutes ago