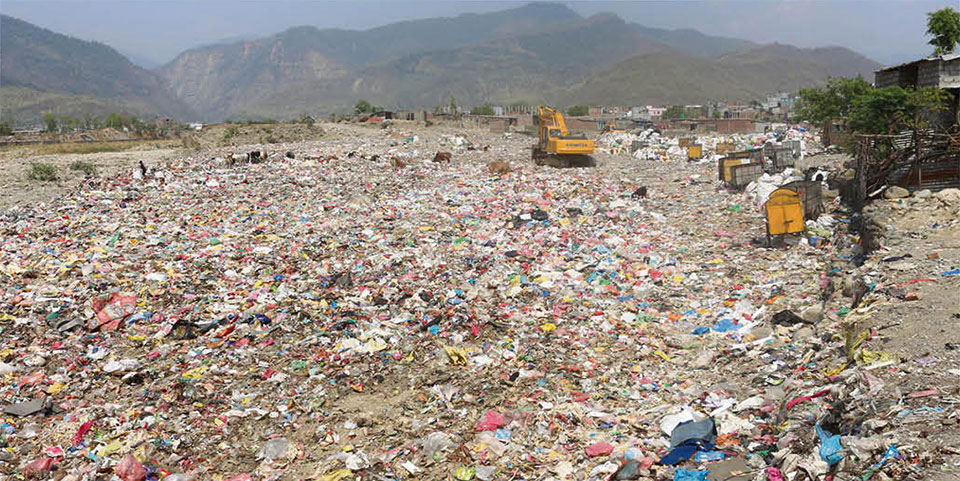 The pile of garbage dumped on the banks of the Tinau River at Butwal Sub-Metropolitan City-11.

BUTWAL, April 6: On February 14, chief minister (CM) of Province 5, Shankar Pokharel, came to the streets and participated in a road cleanup program in Butwal, the temporary capital of the province. He did not only pick the garbage on the roadside but also got into the sewers. The team including the CM, high-level government officials, mayor and deputy mayor of Butwal Sub-metropolis participated in the cleanup campaign. Later, the collected waste was disposed on the banks of the Tinau River.

Marking its one year of establishment, the provincial government launched its 'Clean and Healthy Province' campaign on February 14. Though this has led to cleaner roads and public places, the banks of Tinau, Danda, Danav, Rohini among other rivers have been hugely polluted.

Lack of safe and scientific management of waste disposal has deteriorated the quality of water and harmed the natural beauty. The settlements along the banks of the rivers have no option other than facing this ordeal every day. Apart from releasing bad odor, the unmanaged waste has contaminated the water, which is consumed by the cattle and used by farmers for irrigation.

Butwal Sub-metropolitan City dumps the everyday waste on the banks of the Tinau River which is near the squatters' settlement. Every day, around 54 tons of waste is collected in Butwal. Even though the metropolis claims that the waste is being disposed in a way it will not affect the river, the locals say the reality is different.

Both degradable and non-degradable waste are dumped at the riverside. In summer, the pile of waste releases toxic smell while in monsoon it gets mixed with the river water. Farmers fear that the contaminated water is the reason behind decreasing agricultural production.

Damodar Gyawali, chief of Butwal Municipality's Cleanliness and Waste Management Office, claimed that the waste disposal system is comparatively better in Butwal. However, Nar Bahadur Thapa, 60, of Hattisud said that the sub-metropolis has not sprayed disinfectant on the pile of waste for the past six months. "The sub-metropolis neither covers the waste with sand nor does it spray disinfectant on it. Flies hovering over the garbage later visit our settlement and spread diseases," said Thapa.

Siddharthanagar, which is considered the gateway to Lumbini has been using Danda River as its dumping site. This is the reason why the water in this river has turned black over the years. Tourism entrepreneurs are planning to develop Danda as a tourist area while the municipality is using the same as a dumping site.

As the municipality collects garbage only twice a week, locals dump their waste on the banks of rivers, canals and public places. Environmentalists argue that the local government should find a sustainable measure for waste management. Environment expert Bhojraj Kaderia stressed that the government should opt for scientific management of waste instead of just cleaning the roads and streets.

An expert panel formed by the government to gather historical evidences that support its claim that Kalapani, Lipu Lekh and... Read More...

The number of foreign tourist arrivals in Nepal encouraging during off season: NTB
46 minutes ago