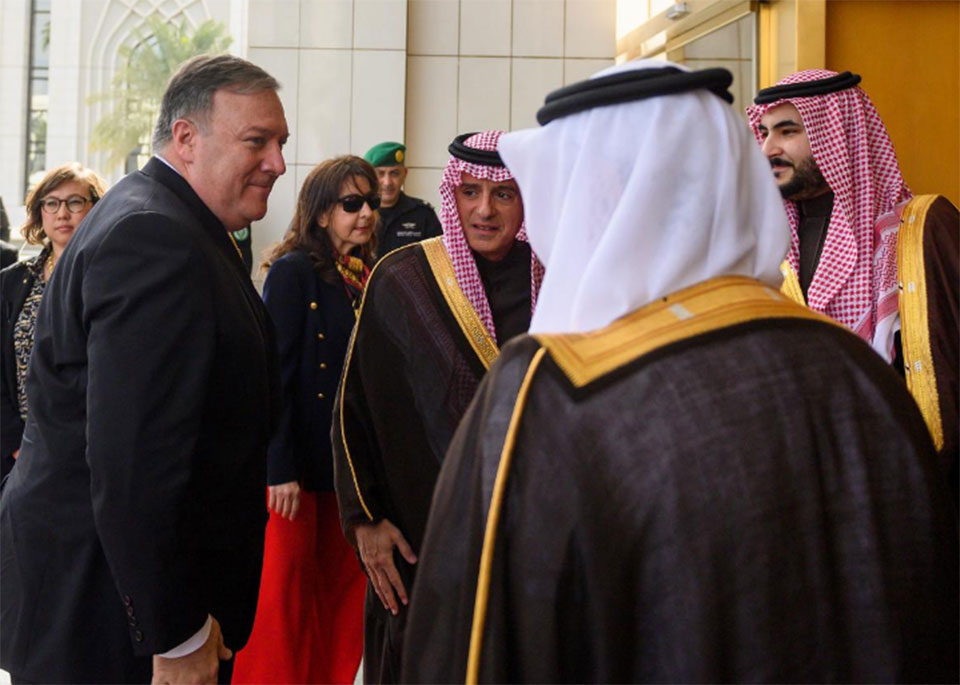 RIYADH, Jan 14: U.S. Secretary of State Mike Pompeo met Saudi Arabia’s king and crown prince in Riyadh on Monday, but will cut short the rest of his Middle East trip to attend a family funeral, a State Department spokesman said.

Pompeo will return home after meetings in Oman instead of traveling on to Kuwait, deputy spokesman Robert Palladino said. U.S. officials said the death was in the family of his wife, who accompanied him on the trip and will return with him.

The top U.S. diplomat met separately with King Salman for 35 minutes and Crown Prince Mohammed bin Salman for another 45 minutes, according to reporters traveling with him.

The U.S. Embassy in Riyadh tweeted that Pompeo and the crown prince had agreed on the need for a continued de-escalation in Yemen and adherence to agreements made last month at talks in Sweden to end a nearly four-year civil war between Yemen’s Saudi-backed government and the Iranian-aligned Houthis.

Pompeo has said he would also discuss the investigation into the murder of Saudi journalist Jamal Khashoggi inside the Saudi consulate in Istanbul in October, but no details of that discussion were immediately available.

A CIA assessment has blamed Prince Mohammed for ordering the killing of Khashoggi, a longtime royal insider who had become a critic of the crown prince, though Saudi officials deny the prince ordered the murder.

The killing has sparked the kingdom’s worst political crisis in a generation, strained ties with Western allies including the United States, and focused attention on Prince Mohammed’s domestic crackdown on dissent and the war in Yemen.

Netfilx pulled an episode of the comedy show ‘Patriot Act with Hasan Minhaj’ from its Internet streaming service in Saudi... Read More...

Govt fails to identify variant of new COVID-19 cases detected in Nepal
13 hours ago
Nepal being dragged to an increasing debt burden: World Bank
12 hours ago

Animals are killed brutally time and again, but perpetrators are hardly booked
26 minutes ago